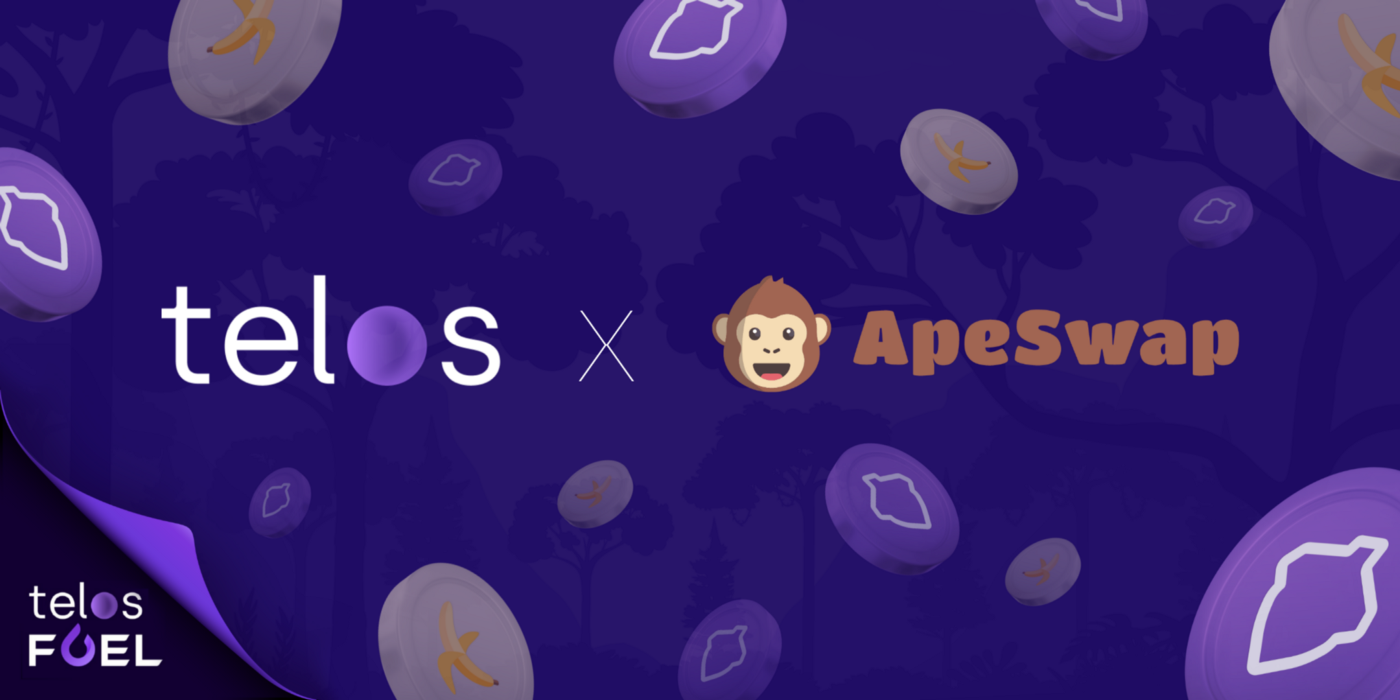 As part of our Telos Fuel Incentive Strategy, we proudly announce that as of October 20th, 2022, Telos is venturing into the DeFi jungle with an extended partnership alongside Automated Market Maker ApeSwap!

The imminent rollout of ApeSwap on Telos offers DeFi traders access to a new line of products with high-yield farming incentives and near-instant finality. Furthermore, ApeSwap’s AMM will provide the Telos ecosystem with innovative new capabilities and features that will optimize reward incentives for both communities.

ApeSwap has grown tremendously in the past year, boasting over $145 million in TVL and sits in the top five most utilized DeFi apps on BNB Chain (At the time of writing). Its popularity among developers is also evident from the plethora of top-tier entities it has partnered with — and Telos is both honored and excited to welcome them as a key partner in this period of DeFi expansion.

Be sure to join our DeFi community for all updates on this partnership and further Telos Fuel announcments: https://t.me/TelosDeFiCommunityHub.

Through the Telos Fuel initiative, AMMs such as ApeSwap are incentivized to encourage their users to add liquidity to the Telos ecosystem in exchange for lucrative rewards. These bonuses can then be distributed to their users, making ApeSwap liquidity providers primary beneficiaries while increasing Telos’ TVL.

The following is a list of products that ApeSwap will support on Telos (at the time of launch on October 20th, 2022):

50% of all post-buybacks and burn DEX revenue will be shared by ApeSwap and Telos during the first 12 months of our partnership. Telos transactions on the ApeSwap DEX incur a 0.2% DEX charge, of which:

Additionally, by adding liquidity to the Telos Liquidity pools on the ApeSwap DEX, users can earn the .05% LP provider fee on each transaction.

To facilitate the initial transaction on our network, Telos is pleased to airdrop 1 $TLOS to GNANA holders that have at least one GNANA in their wallet. A snapshot on October 20th at 20:00 UTC will determine which holders are eligible for the airdrop (this includes holders that are staking GHANA at the time of the snapshot).

“Expanding to Telos will help ApeSwap further bridge the gap between web2 and web3. Through the incredibly fast transaction speeds and low fees available on Telos, we look forward to onboarding the next wave of new DeFi users on ApeSwap Telos!”

“For the last several months, the Telos team has been relentless in its pursuit to identify partners that would add tremendous value as we roll out the Telos Fuel DeFi incentive program. After an initial collaboration with ApeSwap in the spring that exceeded expectations, we knew instantly that this collaboration had far more fruit to bear. The Telos and ApeSwap organizations have worked tirelessly over the past 2+ months to design and implement a partnership to ensure the Telos Fuel initiative thrives and delivers rewards-filled sustainable growth to the Telos DeFi ecosystem. I applaud both the ApeSwap and Telos teams for their efforts in making this a reality.”

ApeSwap is a leading decentralized exchange (DEX) on Binance Smart Chain and Polygon and offers users a top-tier trading experience. The platform features a wide range of DeFi products such as swaps, farming and staking. Users are incentivized to pool liquidity on ApeSwap through yield farming to earn the native currency, $BANANA. Additionally, apes can use their earned $BANANA to stake and earn other tokens and unlock exclusive features. Built by DeFi apes, for DeFi apes, we have a dedicated team with years of experience who are committed to the DeFi community and growing the ApeSwap Jungle.