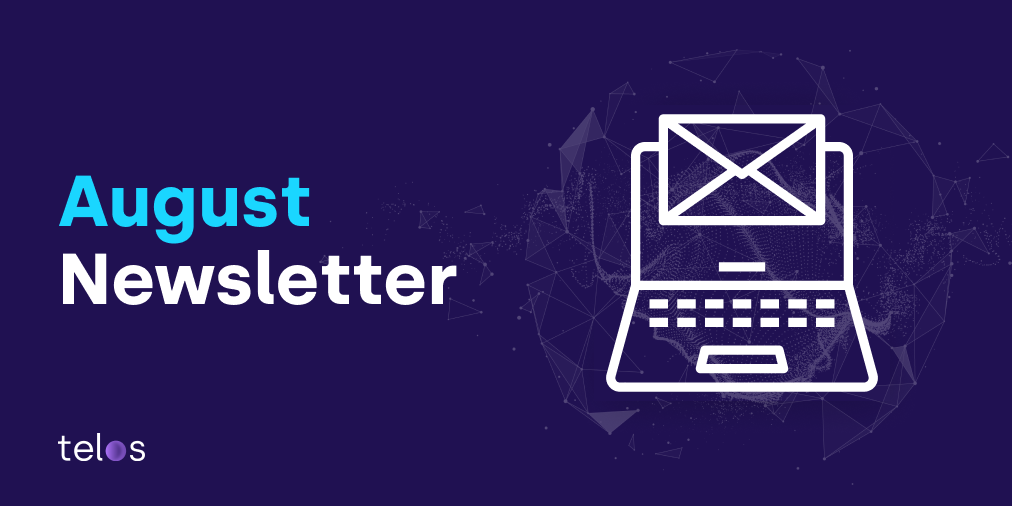 August has been a wild ride for the Telos Ecosystem, but things are just getting started! In this massive update, we’ll be going over all the latest news from Elections to Telos EVM and everything in between. If you don’t have time to read the whole thing, jump to the end for the bullet points!


We have had an exciting month of preparation for the elections and hope that our community members are looking forward to this important event! Internally, we’ve been meeting with potential candidates on a regular basis and inviting them to meetings with the Telos Core Team. This has given them an opportunity to familiarize themselves with everything going on behind the scenes, ahead of the elections.


In terms of timeline, the tentative date for elections start was initially set for September 1st. However, there are still some technical details being worked out before we can launch. Part of this involves an update to Anchor Wallet, well as some updates to the elections smart contract.
‍
The latter needs to be carried out by the Telos Core Developers, who are currently prioritizing their efforts towards launching the Telos EVM as soon as possible. Because of this, there will likely be a couple of more week's delay, until the start of the election process.


In the meantime, we will continue running events and releasing updates on the process, to encourage community involvement. On Friday, we will be releasing an update featuring information on potential candidates, along with a recording of our recent AMA with them.

Earlier this month, TLOS successfully launched on Gate.io, a central exchange that has been serving traders around the world for nearly a decade. We’re excited to see how being listed on such a high caliber exchange will help to grow the Telos ecosystem!

The initial Trading Pairs are TLOS/USDT and TLOS/BTC, with deposits and withdrawals available in BEP-20 and ERC-20. Read more about this exciting milestone here.

Along with opening TLOS trading, Gate.io has also launched a TLOS/USDT liquidity mining rewards pool! Users can now add liquidity and receive rewards! TLOS/USDT pair had the highest annualized yield of 1204.37%. The event will continue until the last week of October. Check out the update from Gate.io for more details on how you can participate!


While auditing the Telos EVM smart contract, Guido Vranken of Sentnl discovered a security vulnerability in the original, Go Ethereum (Geth) code. After being notified of the issue Geth issued a hot fix titled Hades Gamma (v1.10.8). This news speaks volumes about the Sentnl auditing agency and the level of professionalism involved in the Telos EVM. Read the full update here.

With Telos EVM nearing completion, our ecosystem saw a ton of growth and excitement in recent weeks! We know many of our new community members are likely curious when the Telos EVM will be launched and while the Hyperion team is still finalizing their updates, the Telos EVM has continued to progress in other areas.

‍
The audit from Sentnl has been delivered to the Telos Core Developers and final changes are being made to the Telos EVM contract in line with findings and recommendations of the auditing team. The RPC auditing has begun and is pending the contract being finalized, we will update our community as each audit phase is complete.

‍
This is the most major final step before we can confidently release a launch date and although our team is moving as quickly as possible, we are also taking the time necessary to be diligent in this process. The recent news surrounding the Ethereum EVM vulnerability speaks to the importance of this process and we appreciate our community's patience.

We will be hosting a Telos EVM AMA in the near future to get the community up to speed on these final areas and answer any questions they may have. Keep your eye on our social channels for the announcement of this exciting event!

In recent weeks our marketing team has continued to grow in order to keep up with the needs of our ecosystem! We recently brought on several new team members and expanded the roles and responsibilities of current team members. We’ll give a more thorough introduction in a future update, but in the meantime here are the bullet points:

We are extremely excited for all these new changes and pumped to have such an awesome team stepping up to lead our marketing initiatives!

In our last update, we mentioned that the marketing department would get the ball rolling on budget reports in this newsletter. Our finance department restructured expense reporting internally this month in preparation for future financial reports. However, we are still awaiting clarity on how granular we can get with this information.


‍
To give the community some early insight into the budget for the marketing department, our internal operations and expenses for August were roughly $36,000 USD. In anticipation of the Telos EVM, we’ve cleared an additional $50,000 USD for influencer promotion. Only a portion of this has been spent so far, but we are looking to pre-emptively clear further spending, following the recent success of current promotional initiatives.


‍
We are hoping to be able to release similar budget updates from each department in the near future, along with more granular reports when we are cleared to release this information. In the meantime, we encourage curious community members to check out the tf account to get a better on spending from the Foundation’s budget. We are also keeping organized records of spending for future board members to review.


August was one of our most eventful months yet and things aren’t slowing down! Here are the highlights of this newsletter:

Thanks to all of our community members, new and old, for their continued support in our ecosystem. We hope you’re ready for another epic month ahead!