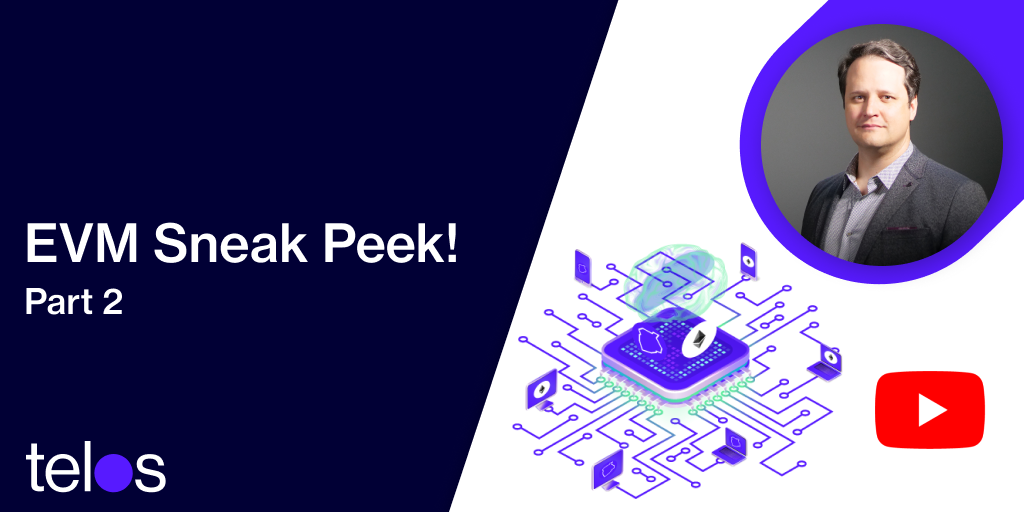 Part Two of our EVM Sneak Peek, featuring Douglas Horn from GoodBlock and Jesse Schulman, Project Technical Lead for the Telos Ethereum Virtual Machine. If you haven’t yet seen Part 1 yet, be sure to check it out!

In Part 1 of this series, we focused on what the Telos EVM is, why it’s so powerful and even got a look at MetaMask running on the testnet! To recap, Telos EVM is an Ethereum Virtual Machine, running on the Telos network. It allows Ethereum based developers to create projects that can scale beyond the limitations of other EVMs on the market.

In Part 2 of this sneak peek, Douglas and Jesse dive into the history of how the Telos EVM came to be, some of the obstacles they’ve faced along the way and the groundbreaking tools they’ve developed to overcome these roadblocks!Check out all of this and more in the video below! If you don’t have time to watch the video, stick around, because we’re going to be going over the highlights in the rest of this article. https://www.youtube.com/watch?v=nBjBPlkrxZ0

History of EOSIO Based EVM

A team of developers from the Telos ecosystem came together and recognized the potential for this new development, if it was pushed to the limit. They compiled a list of necessary tasks that needed to be completed if the initial EOSIO EVM was to become operational as a public blockchain. This was laid out with the intention of creating a fully functional, extremely powerful alternative to the Ethereum EVM and other EVMs currently on the market.

Some tasks on this list we’re much more difficult to tackle than others. This led to an extended timeline for the team, especially in the early days of development when resources were limited. However, the benefit of this added effort is a more powerful and versatile final product that can outperform its competitors. These necessary developments are also why no other EOSIO based blockchains are attempting to create an EVM as involved as the Telos EVM. This will make Telos the only network supporting the dominating protocol technologies on dApp Radar (EOSIO & EVM), which opens the Telos ecosystem up to the largest possible developer audience!

Why are Jesse and Douglas So Pumped About the Block Explorer?!

If you watched the video, the biggest sneak peek that Douglas and Jesse gave us was the introduction of a fully operational, public block explorer! Below is a breakdown of what the block explorer is and why it’s such an important piece of the Telos EVM puzzle.

Developing the proper history and block explorer was a huge undertaking and it quickly became one of the most involved aspects of EVM development. Now that it’s nearing completion, the productivity of Telos EVM development will increase exponentially, as developers can use it to streamline their process.

The Telos EVM has gone through many exciting developments over the past year, but the team isn’t slowing down anytime soon! We’ve overcome many of the obstacles that the initial EOSIO EVM contract faced and are well on our way to becoming a fully-fledged public EVM. All these innovations play an integral role in making the Telos EVM the most powerful EVM on the market. We’re extremely excited to keep updating our community on all the developments going on behind the scenes and we hope you are too! If you haven’t seen it yet, be sure to check out Part 1 of our EVM Sneak Peek and stay tuned for Part 3! Also, come back on May 13th when we'll be sharing the first of our bi-weekly technical updates. There’s bound to be plenty more surprises along the way, so make sure you follow us on all our social channels to stay in the loop on this and any other developments from within the Telos ecosystem.