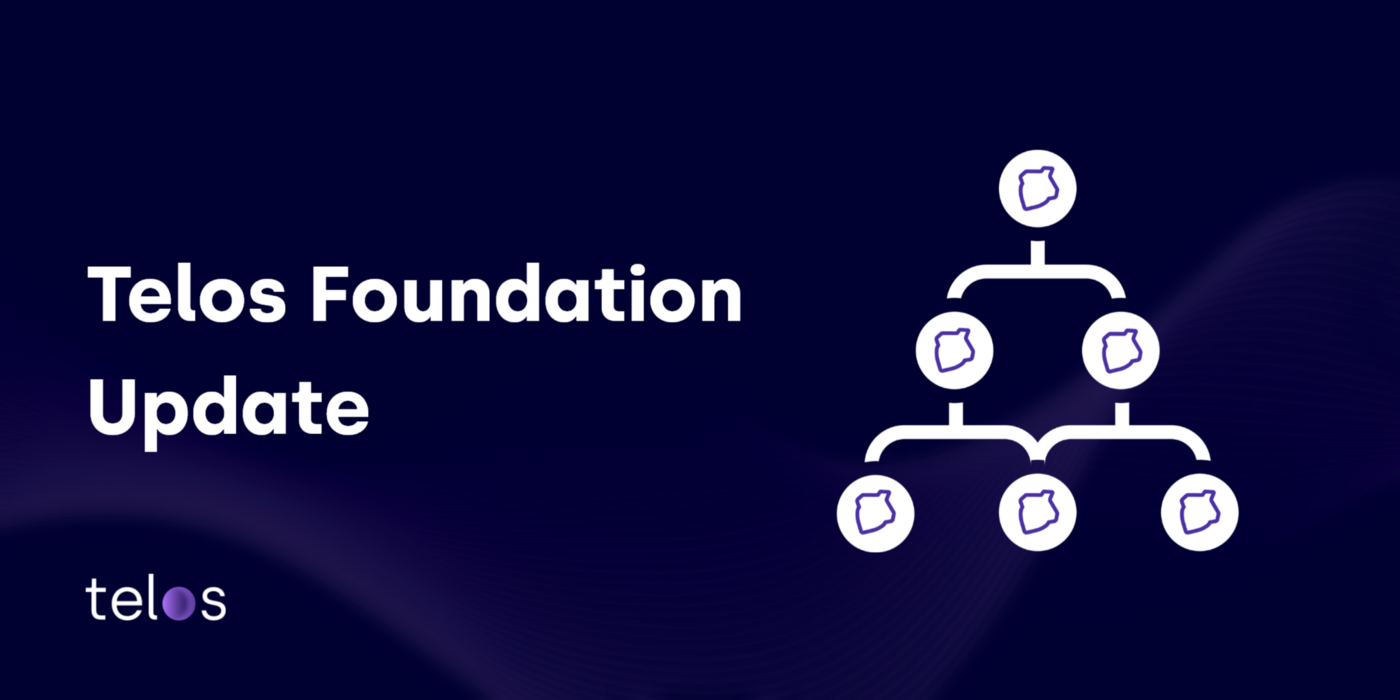 We are pleased to announce the latest improvements to our operations at the Telos Foundation.

We pride ourselves on remaining nimble and able to adapt to all types of markets, particularly as we continue to advance the state of Web3. And like the rest of the Web3 community, we have faced the reality checks of a bear market head-on. However, unlike many others, we are happy to say we are progressing through it relatively unscathed.

We see the current market conditions as a fantastic opportunity to grow. Therefore, over the past two months, we have taken the time to analyze what we have done right and where we can improve and take advantage of market opportunities.

Before diving in, let’s take a quick look at our structure before this two-month examination period and compare it to where we are now.

Generally, we have seen advantages in flattening parts of our structure to provide more independent focus areas with smaller teams. We are already seeing early success within our NFT ecosystem, increased content output, and decisive decision-making across the Telos Foundation.

We have adjusted our structure to have a Marketing Operations Lead (Kristel), along with a Design (and brand) Lead (Andrew) and the re-introduction of a Marketing Strategy Consultant role (currently filled by Debie). In addition, the CEO/Executive Director will also have a more hands-on role in marketing, with the COO assisting operationally.

For Q3 and Q4, the necessity for more hands-on marketing resources has increased drastically with heavy content, brand and website deliverables. As a result, more hands-on staff have been brought on to meet the demands of these critical initiatives.

While not directly related to marketing, we felt introducing essential area-focused leads (DeFi, Gaming/Metaverse and NFT) was a more strategic use of capital now than a full-time CMO role. More on this specific allocation of funds can be found in the following section.

Key Use-Case Leads Instead of a Head of Community

Over the last two quarters, we realized that the continued use of a traditional hierarchy and a broad Web3 focus would not spark our desired significant growth of the Telos community. We found that the NFT community has needs/interests different from the DeFi community, and the Gaming community has different needs again — the same applies to the Developer community. Of course, there were instances of overlap; however, we found we were serving no community effectively by having the same lead focusing on all areas.

This revelation led to creation of new roles to focus on key growth areas for Telos.

The responsibilities of each of these roles go beyond community building alone. These individuals strategize, plan and work closely with Business Development and Marketing to ensure their respective communities are growing (KPIs) and thriving as expected on Telos.

Earlier this year, we tried some unique approaches internally in the realm of PR with mixed results. Unfortunately, when the market crashed, there was too much noise for any of our content to resonate. In addition, the Telos team was in a heads-down build mode; therefore, we didn’t have enough content to justify reintroducing an agency at that time.

The situation has changed drastically over the last month or so. We are pleased to see conditions change with less panic and noise due to various failed protocols and exchange insolvencies. More importantly, however, we have built up a backlog of exciting news that we are ready to share.

Consequently, we have decided to reintroduce a PR partner, and Telos is pleased to announce Market Across will be our PR agency from September onwards!

Imperative economic changes will be introduced very soon and will bring a great deal of excitement to the area of DeFi and Telos, generally. But, of course, this is subject to community approval, so we look forward to presenting proposals in the coming days and weeks to re-energize DeFi through a robust new incentive model.

Consequently, this is a prime example of why a DeFi lead with top-line experience in this area would be an asset to Telos. As a result, we are interviewing several high-level candidates for this position. With the appropriate incentive model and leadership, we believe the individual who fills this role will be a significant boon for the network.

As part of our structural changes, we had to say thank you and bid farewell to Paul (formerly CMO), Thomas (formerly Head of Community) and Michael (part-time PR). We are grateful to them for building out key initiatives, many of which we will continue under the new structure.

Hints of What is to Come

Will you be bringing in a CMO?

The Marketing Operations lead covers the position, Design lead and a new Consultant role. The use of the role title doesn’t seem appropriate at this time. The position may return later this year or early next, depending on when we find the ideal candidate and require a full-time CMO.

Will you add a head of community again?

We realized we need more specific leads serving key communities like NFT and DeFi more than anything too general. We are trying to avoid too many layers to the Telos Foundation onion.

Sometimes we are quieter than others, but don’t be dismayed! This happens because our team stays busy building out major Telos initiatives or improving internally. This is typical when great things are just over the horizon.

It’s also important to remember the feeling of progress and excitement the marketing team creates is often the end point of work for the entire team. Marketing is the messenger, but it takes a village to make the news. We had to work on that village and its outputs. Continued vigilance is why Telos perseveres in good and bad times — and is always getting more robust.

There is always room for optimization and better ways that the marketing team can push our message out there. So we appreciate the feedback and look forward to evolving our marketing strategy over time.

Is now a time of consolidation or growth?

We think the latter but with prudence. While we are tightening the belt on our USD spend, there are deals to be had; and we believe we can be aggressive in some areas, namely, impact and growth.