Four More Reasons to Be Bullish on Telos 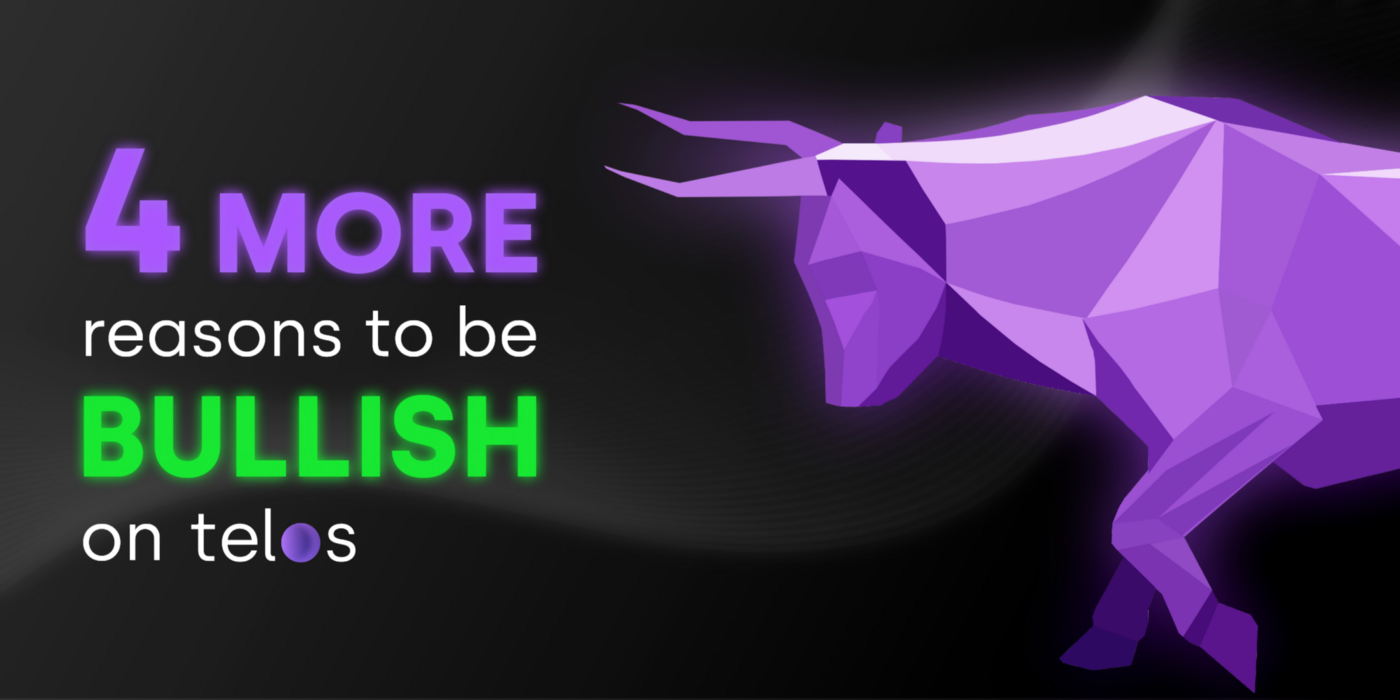 After publishing the first article of this two-part series, we were delighted to see our community’s response and even happier to see the criticisms! That’s because many of the comments had one thing in common: You all agreed there were far more than just four reasons to be bullish on Telos! With that in mind, today, we gladly share the second article of this two-part series with you all. Here are four more reasons to be bullish on Telos!

DeFi’s favorite regulator (cough), Gary Gensler, and his team of antiheroes at the Securities and Exchange Commission (SEC) haven’t been shy about their intentions to impose strict regulations on cryptocurrencies. The end goal of this effort is to ensure crypto complies with US securities laws — namely, the 1933 securities act. The SEC has been particularly vocal about Initial Coin Offerings (ICOs) and their risk to investors due to potential fraud and minimal market regulation. Furthermore, the SEC has often publicly stated that digital assets that have raised capital through ICOs should be considered “securities,” leaving many to believe it’s just a matter of time before SEC regulations come into effect. However, if this likely outcome does occur, you’ll be happy to know that TLOS stands an excellent chance of remaining unaffected in the long term.

That’s because, unlike many cryptocurrencies currently in circulation, Telos did not hold an ICO to raise initial funds but rather took a road far less traveled in the crypto industry, building its funding from the ground up. Here’s how:

In June 2018, Telos sent out an airdrop based on a genesis snapshot of $EOS holders. The airdrop was capped at 40,000 TLOS, and recipients were required to take a specific action to claim their tokens. Unclaimed TLOS was cycled back into the server count to fund the Telos Foundation, which included payments to validators and the Telos Core Development team. In 2021, Telos raised approximately $8 million (at a value of $1 per TLOS) through a private investment round. But unlike ICOs, where the token distribution to whales is so great, they virtually centralize the control of the overall token supply, the $8 million raised by Telos equated to just 8 million TLOS out of a supply of 355,000,000 TLOS — or 2.2% of the total supply.

One of the biggest news stories to come out of the Telos ecosystem is the recent announcement of major EOSIO networks (EOS, WAX, UX, Telos) and their formation of a coalition. The events that led to this development occurred after a falling out between EOS and its primary developer, Block. one, which resulted in the latter halting all development indefinitely on the EOSIO chain, drawing calls from the community for EOS to take a much-needed new direction.

The community’s calls were answered, and that new direction came in the form of the Antelope Coalition. Tech leads and CEOs from Telos, EOS, Wax, and UX network banded together to create a new alliance that would take back control over the development of the EOSIO core code and move forward with a rebranded open-source framework that will empower developers and users. The four entities that make up the Antelope Coalition have committed to an impressive $8 million combined annual budget that will introduce robust security features and state-of-the-art technology to EOSIO’s core code, such as:

Full details on this monumental announcement and Telos’ role in Antelope can be found here.

The absence of a centralized regulatory body is a distinctive feature that has attracted millions of users across the globe to blockchain and cryptocurrency. Unlike traditional models, Blockchain networks feature on-chain governance that provides stakeholders with a system to manage and institute changes to the network through code updates. And while governance is a common aspect of virtually every blockchain, the Telos Decide Governance model yet again sets the status quo for equitability and transparency among competing networks.

Telos Decide is an on-chain governance engine built exclusively for Telos Blockchain users and developers. It features a broad suite of voting services and DAC/DAO tools that empower stakeholders when significant network upgrades and changes are proposed. Users can access the voting engine through two Telos-built voting applications. These are the Telos decide webapp and Decide Voter mobile app.

Smart contracts carry out voters’ decisions when results are finalized on a specific proposal, thus removing any possibility of human error. Furthermore, Telos Decide eliminates the need for developers to oversee time-consuming tasks such as user registration, token management, and vote tracking. They can instead focus solely on building contracts to interact, interpret, and execute according to stakeholder votes.

Follow this link for more on how to participate in Telos governance proposals.

Telos is Everywhere
Is there an important DeFi conference happening somewhere in the world? If so, you can bet your TLOS that representatives of the Telos team are on the ground and making connections to introduce its industry-leading technology to the masses. In June of this year, Telos World welcomed a flood of guests during DCentral and Consensus, two of the largest DeFi conferences in the United States. Shortly afterwards, the Telos team flew to the Big Apple to shake hands at NFT.NYC. In July, Binance celebrated its 5th year in business with a conference in Paris, which the Telos Exchanges and Liquidity team attended and made valuable connections. More recently, Telos reps went north to Toronto for Canada’s biggest DeFi event, the Blockchain Futuristic Conference.

We’re Ready to Build with You
While this two-part article series shared eight incredible reasons why you should be bullish on Telos, there are, in actuality, many more than that. As 2022 rolls on, Telos continues to shine as a leader in DeFi innovation. Moreover, Telos proves to be a network in which developers and users can rely on its grassroots origins to build the future of DeFi efficiently and safely.

The Telos EVM is the most powerful and scalable Ethereum Smart Contract platform built to power Web 3.0. Telos features a robust, third-generation, ESG-compliant evolutionary blockchain governance system, including smart contracts, advanced voting features, and flexible and user-friendly fee models. In addition, Telos supports the blockchain ecosystem by serving as an incubator and accelerator for decentralized applications through development grants. Build with us.