Four Reasons To Be Bullish On Telos 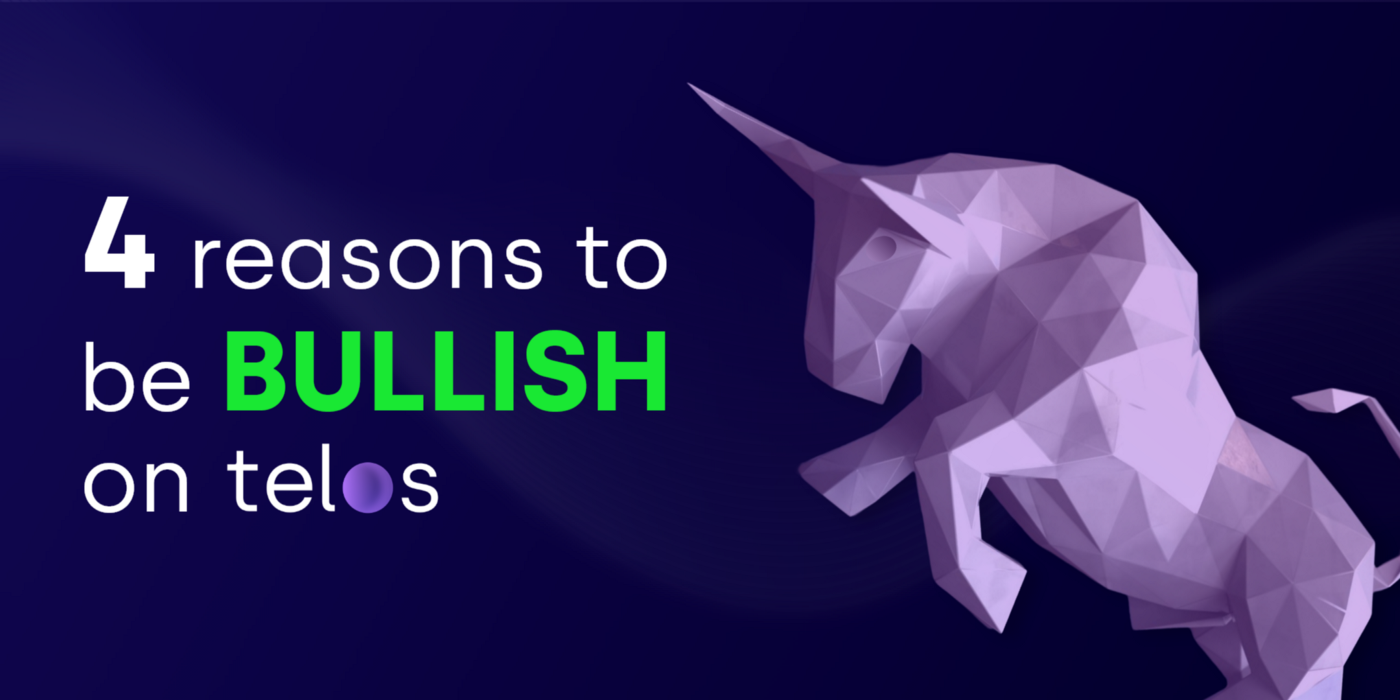 Telos is on pace to make 2022 its most triumphant year yet. Behind the scenes, the team has rolled out upgrades to their industry-leading EVM, onboarded many new projects, infiltrated the world of NFTs, and much more. In this first two-part series, we look closely at why there are several good reasons to be bullish on Telos.

Grassroots Community that Keeps On Growing

In DeFi and crypto, many projects and dApps seemingly hit the ground running but lose steam halfway through the race — and many more disappear altogether. While this phenomenon occurs for several reasons, one of the main catalysts for a project’s demise is the lack of strong community support. Thankfully, this isn’t a problem for Telos.

From January 2022 until the time of writing, Telos has enjoyed exceptional community growth across its social platforms. For example, overall engagement across all social channels increased by 25%, while Twitter followers climbed by a staggering 30k in the previous seven months and sat just under the 100K milestone. The infographic below provides a more detailed depiction of this impressive community growth.

You can tell a lot about a blockchain network by the effectiveness of its team during a bear market — and Telos is a shining example of what a decentralized diamond in the rough looks like. The second quarter of 2022 was the toughest in the history of the (relatively) young crypto market. Nevertheless, the Telos team added 29 high-quality dApps to its ecosystem in Q2 alone. These projects join a diverse family of others that provide real-world utility, some of which include:

● APPICS — A reward-based social media app that introduces a new ecosystem which merges lifestyle, passion and user-generated income inside a single mobile application.

● Brokoli — A DEX and suite of eco-focused tools that allow users the choice to make a positive climate impact without added costs.

● Nuco Cloud — A Web3-based cloud computing solution that allows users to monetize unused computing power for the benefit of the global community.

Making Waves in the NFT Community

In addition to onboarding tier-1 projects and dApps, Telos has also made impressive strides in boosting its presence in the NFT community. For example, the Mission NFT contest was launched in early May and offers digital artists and NFT creators a chance to win part of a 175,000 TLOS prize pool. Over 90 projects were submitted, and the contest has now entered the public voting round to select the top 10, which will be narrowed down to the final five by a Telos judging panel. For more on how you can cast your votes, click here.

If you’ve ever participated in a hyped DeFi presale, whether it was a new NFT collection or the launch of a potential 100x degen token, you know well what the phrase “gas war” means in this context. However, if you’re new to crypto, here’s a quick refresher:

Gas wars lead to the front running of transactions, which can happen in two ways. The first results from block miners or node operators who see upcoming transactions in a queue that will result in considerable price action. These unscrupulous actors then leverage this knowledge to enter a trade with a higher GWEI (or gas) set. This ensures they are ideally positioned ahead of other users but just before the more significant transaction is executed. Of course, an individual can also program bots to perform this action. But ultimately, whether it’s a node operator or a bot, it’s unfair to the average user.

The second method of front running occurs when a large community of investors are vying to get a prime entry in a token or mint one or more NFTs from a collection. Similar to the first example, if users suspect these assets will provide significant long-term financial gain, they typically attempt to force their transactions to finalize by raising the gas. This creates a domino effect that results in network congestion and many costly failed transactions. We need only examine the Otherside NFT land sale to get an idea of the consequences of such scenarios.

Fortunately for DeFi users, this time-consuming and costly practice doesn’t take place on the Telos Network. Telos utilizes a fixed gas rate on transactions and does not permit users or node operators to increase or decrease GWEI. Users who attempt to modify their gas on a transaction will only be charged the set fee and remain in their place in the queue, with no extra expense incurred. Furthermore, Telos’ lighting-fast EVM ensures that you’re not staring at your wallet for minutes, or sometimes hours, as you would on other blockchains. It produces the fastest transaction finalization of any network in the most democratic way possible.

The World’s Best EVM is Getting Even Better

In 2021 the Telos Core Development (TCD) team debuted an Ethereum Virtual Machine (EVM) that surpassed all other EVMs on the market. The Telos EVM (TEVM) featured a higher throughput than all other models, processed faster transaction finalizations, produced fewer carbon emissions, and of course, did all of this for less than a fraction of the price of other EVMs.

But rather than kick back and toast this monumental achievement, the TCD set their sights on the future of DeFi and went to work developing TEVM 1.5 and its successor, TEVM 2.0 Supernode.

The TEVM 1.5 includes several upgrades that aim to boost the overall user experience, the most exciting of which is the opportunity to earn passive rewards through the upcoming implementation of single asset staking of the ERC4626 sTLOS token. Furthermore, A new indexer enables additional features to Teloscan, such as a token overview, holder lists, and performance improvement for various services. Telos EVM 1.5 will also significantly improve UX for TLOS and wTLOS transfers and provide revised block header architecture, along with a newly re-indexed chain to ensure transactions such as asset transfers and bridging are more streamlined.

The TEVM 2.0 is in development and, once deployed, will feature unsurpassed power for Ethereum-based applications. More details on the building process can be found in this recent AMA with TCD lead architect Jesse Shulman and TCD Program Manager Kersten Werth.

Stay tuned for our second installment of our Bullish on Telos series for more exciting info on improved governance protocols, re-branding, and how Telos can safely navigate impending SEC regulations on securities — you won’t want to miss this!