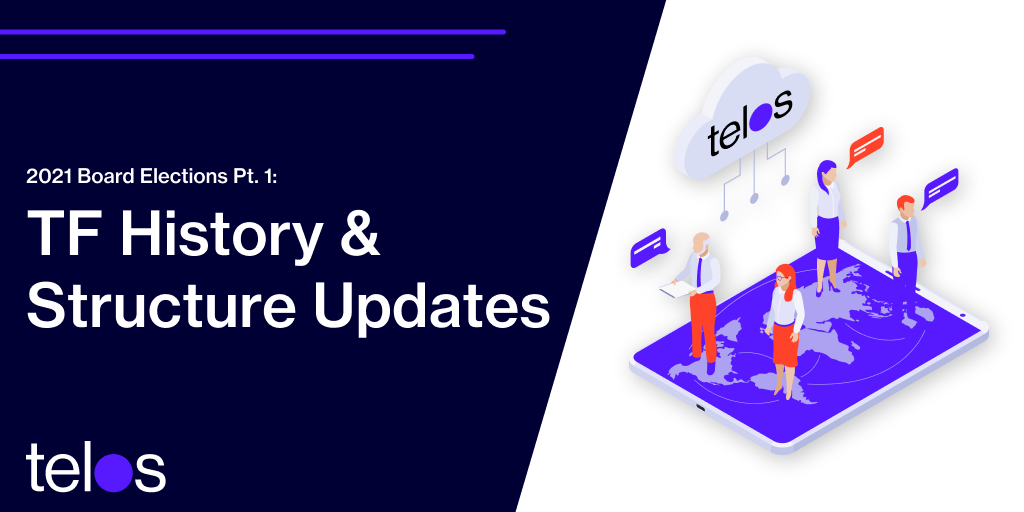 Election season is just around the corner for the Telos Foundation and this promises to be one of the most important elections so far! In the first installment of this series, we’re going to be reviewing the history of the Telos Foundation, then dive into some recent, exciting changes to the foundation’s structure !

A Trip Back in Time

The Telos Blockchain network was launched on December 12th 2018 and activated on December 18th of the same year. Over 130 individuals participated in the Telos Launch Group across 12 teams, six of which acted as the launching entity. Randomization kept these teams anonymous, making it impossible to know which of the 6 ultimately created the network.The Telos Foundation was founded shortly after the network launch. It was brought into being due to the need for a human element to represent the blockchain on a global scale.

To get an idea of the excitement surrounding this historic occasion, check out this fun video from our friends at Telos UK. In it you’ll find an interview with Jim Hewitt, following his election as the first president of the Telos Foundation!

Upon launch, the foundation was granted an endowment of 6 million TLOS tokens to aid in fulfilling its mission. If the foundation used up the funds granted, it would be able to submit for additional funding from the community, in order to continue its initiative.

According to early documentation, the foundation operated as a DAO with major decisions being determined by Telos Foundation Voting Tokens (TFVT tokens) and day-to-day decisions falling on an executive director. The executive director was selected by an executive board of 12 members. These members were elected by TFVT holders. Initially TFVT was distributed annually to members of the community who were deemed to be adding value to the network and worthy of being entrusted with voting power.

Over the years, many community members have come and gone from the Telos Foundation. Each of them had a meaningful impact on the growth of the network. However, a lack of funding caused by the low price of TLOS and market illiquidity made it difficult to maintain momentum on certain initiatives. A lack in financial incentive meant that much of the traditional structure became a low priority. Volunteers became necessary to take on the roles of departing board members. At this point, four of the originally voted members make up the board, along with several volunteers who were not voted in, but invited to help the remaining board members carry out their initiatives.

Time For a Change!

Thanks to the tireless work of all Telos contributors and dedicated direction from foundation members, the blockchain managed to grow immensely. It did this in a grassroots fashion, with minimal financial firepower. This growth was a testament to the power that the Telos community possess. It culminated in an extremely successful Q1 of 2021, with the value of TLOS up by over 1000% after the first quarter! This massive price increase, along with a plethora of technical and economic successes brought exciting opportunities for growth to the Telos blockchain. The Telos Foundation continued to work tirelessly in order to act on every chance it had to expand its horizons. However, inefficiencies in the current structure made it apparent that operations could be executed in a much more productive fashion. So, members of the foundation and volunteers from the community identified a need to develop a new structure.This aimed to bring a new level of professionalism in the way the Telos Foundation operates, allowing it to expand its impact exponentially.

Changes to structure are an ongoing initiative but we are excited to update the community on our most notable developments in this area. Those interested in reading more than what's highlighted here should check out the full break down in The Telos Core Team document.

Each team is expected to present hiring decisions and budget requests at the weekly strategy session. The lead of each core team will be responsible for presenting and maintaining the budget of their team.[dt_gap height="15" /]Note: The Telos Foundation is currently funded through an allocation of 700,000 TLOS a month, although this does not represent the monthly budget being spent by the foundation.

The Telos Product Development team is responsible for the development, release and maintenance of the Telos Core Product offerings. This team will include multiple product owners and individual internal and external development teams.

The EVM Product Development team is responsible for the coordination of internal and external resources to successfully roll out the Telos EVM (Ethereum Virtual Machine). The Manager will serve as the decision maker and dictate the direction of the EVM program.

The liquidity strategy team is responsible for dictating the direction of funds from the bounce sale for liquidity. This team will ensure that the availability and liquidity depth of Telos is ever increasing. It is important that Telos has a key representative in building relationships and partnerships with professional exchanges.

The Marketing and Community Growth team will be responsible for how the world receives and sees Telos. All consumer facing material should be reviewed and distributed by the marketing team in order to ensure the correct narrative is being conveyed.

Strategize on how Telos can create bridges between crypto projects and enterprise businesses. This team will facilitate and execute the outreach and on boarding process for Telos partners.

Okay, so we’ve looked at the history of the Telos Foundation and gone over some of the recent changes in how it operates. But why should you care? Because we’re here to represent you and everyone else in the Telos community! Even more important, Telos Foundation board elections are just around the corner and we hope you are as excited for them as we are! It’s pretty apparent that the Telos community has come a long way since its humble beginnings and the foundation needs to continue evolving along with it. The only way to do this is by continued involvement of the people who make up the Telos ecosystem. This election is going to be extra special, with opportunities for everyone to be involved, either by running for a board seat or voting for their favourite candidates. We’re going to have plenty more updates surrounding the details of this election coming out very soon, so stay tuned! In the meantime, you can join the discussions surrounding elections in the dedicated Telos Foundation telegram right here: https://t.me/telosfoundationpub Also, be sure to follow us on all of our social channels to stay in the loop on the latest news and developments from within the Telos community.