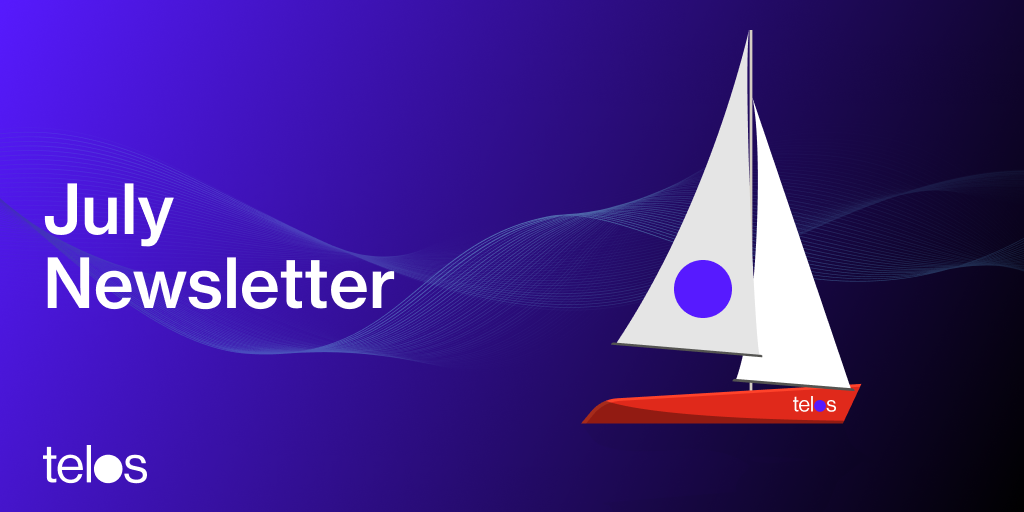 ‍Time for our monthly recap of all the exciting news from July and special look at some of the upcoming initiatives to look forward to in the coming weeks!

July is coming to an end, but Telos is just getting started! The Telos ecosystem went through some big changes over the past few weeks, but it’s very much been a calm before the storm. While we prep for the launch of Telos EVM and some other major announcements coming out of the Telos ecosystem very soon, we’ve been hard at work aligning our internal operations for an exciting month ahead!

The Telos Foundation board elections will finally be ramping up in the coming month! Jim Hewitt, the first president of the Telos Foundation, has been working alongside several other Telos Foundation members to develop guidelines and a timeline for this important event. We’re going to start releasing some of this information on August 3rd, followed by a Telos Tuesday Roundtable discussion, on the same day.

Join us on the Telos Community Telegram to learn more about:

After an overview from the elections team, we’ll be opening things up to the community. This will give you a chance to ask your questions, offer feedback and share concerns. We hope to see you there! Learn more here.

The new website will be going live this Monday! We are hard at work putting the finishing touches on everything and can’t wait to share it with the community. The exact timing of the launch has yet to be determined, but it will likely be some time around 18:00 UTC. Community members may experience some downtime with the website for a period of hours leading up to the launch, while we finalize the technical details. We will push out an announcement on our socials with further details, if this is the case.

We’ll also be updating the branding across our social channels. This will be used to present the new style changes to the community that we have been working on, in a controlled environment. Before we push them to notable platforms that are outside of our control, our team will be releasing an updated style guide and putting it up for a community vote. The new style guide will likely be released the week of August 9th, with details on the voting process coming soon.

As the Telos EVM Project readies for launch, the Telos Core Devs are ramping up work on several other key Telos products. To keep the community in the loop, we’ll be transitioning from our bi-weekly Telos EVM updates to general technical updates. Keep your eyes peeled for our first of these, coming out some time in the next couple weeks, to learn about all the work and developments going on behind the scenes.

The Marketing & Community Growth team has undergone a massive overhaul over the past month, with a ton of new personnel and partners being brought on. Check out our most recent marketing update for more details on these changes. Over the past couple of weeks, the new team has been busy working behind the scenes to restructure internal operations and prepare for a big marketing push that will be launching soon. We hope our community is just as excited as we are to grow the Telos ecoystem and tell the world about Telos.

We’ve had several community members ask about budget and financial reports from the Telos Foundation and we want to let our community know that this is a priority for us. We’ll likely start releasing monthly budget reports from the Marketing & Community Growth department at the end of next month. These reports will grow to other department reports shortly after, as we build out an efficient structure for gathering and reporting on this information.

Below are just a few of the many noteworthy features that Telos received in the past month:

The much anticipated Decide Voter mobile app by GoodBlock and Telos Crew has just launched on the Apple Store and Google Play Store! Governance is an important part of the Telos ecosystem, thanks to the powerful Telos Decide governance engine. The Decide Voter mobile app is a revolutionary innovation that makes the Telos Decide toolset more accessible and powerful than ever before! Read more about the app in our recent announcement then download it on the Apple App Store or Google Play Store today!

The Telos based application Zeptagram is making waves in both the music and blockchain industry. The recent Pre-Sale of their native token, ZPTC, on T-Starter successfully hit its hard cap of $750,000 USD. Combined with their Pre-IPO raise of $700,000 earlier this year, the project has already raised $1,450,000! They show no signs of slowing down, with several additional fundraising initiatives on the horizon, culminating in an IPO next spring. Another ZPTC sale on T-Starter just went live. This raise is only open until August 15th, so interested investors should act fast. Learn more about Zeptagram in our recent article on the project.

Conclusion: A big month for Telos, with bigger milestones on the horizon

July was a busy month for Telos, with several big changes and news stories coming out of the ecosystem. Here’s the summary of everything we covered in this updated.

All of this is awesome news for Telos, but the best is still to come! Every month our ecosystem continues along the path of exponential growth as the Telos network heads towards mass-adoption and August will be no different. We hope our community is looking forward to another exciting month ahead!

As we work toward mass adoption, Telos continues to welcome partners operating in every area of the industry and if you want to get involved, we’d love to hear from you! We’re consistently looking for innovative projects, industry partners, new investors and everyone else in between. If this sounds like you, drop us a line here!