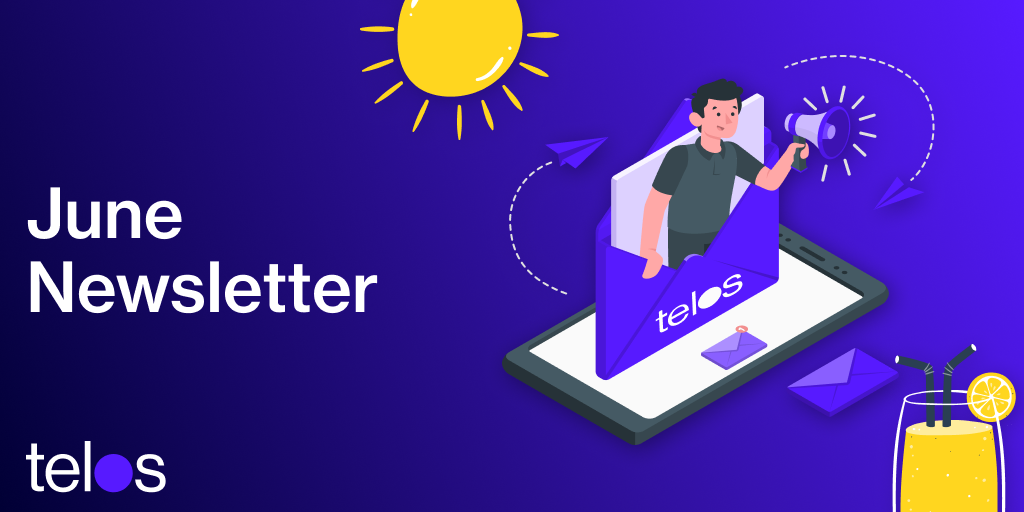 This month the Telos ecosystem made progress on all fronts including technical developments, tokenomics and partnerships. Read all about it below!

Although this month has seen plenty of developments from within the Telos ecosystem, the past quarter has seen even more growth. Douglas Horn from GoodBlock will be going over all of this in the Telos Q2 report and technical roadmap update. Because of this, we’ll keep this months newsletter short and encourage everyone to check out the video report when it goes live, July 1st at 11:00AM PT on the GoodBlock YouTube channel.

DappRadar partnered with Telos at the start of the month to begin listing and tracking applications built on the network. DappRadar is the number one global NFT and DeFi dapp store, so this is a major milestone for the Telos in terms of mass recognition. With the upcoming release of the Telos Ethereum Virtual Machine, Telos will become the only network supporting the dominating protocol technologies on DappRadar (EOSIO C++ & Solidity EVM). Read more…

Some community members have asked about the status of Telos Foundation board elections. Although the process has been delayed longer than initially predicted, we’d like to reassure the community that we are working hard to make sure this important event is not overlooked. A committee is being put in place to oversee the process and compile recommendations and guidelines for future board members. In addition, we are awaiting the official release of the Telos Decide Mobile App to ensure it will be easy for the community to take part in the transparent voting process. In the meantime, we encourage anyone interested to consider running for a board seat. Read more…

The Telos Core Dev team recently launched two powerful oracles that are going to become an integral part of the Telos ecosystem. The price oracle and random number generator are two of the most important oracles for developer use, especially for popular applications in DeFi, gambling, gaming and more. Unlike many competitors, the oracles on Telos are fast, feeless, accessible and decentralized. Read More…

During the month of June, the Telos EVM team cleared everything except for the final two steps before mainnet launch. As the block explorer nears completion and we finalize onboarding the first applications for the Telos EVM, the team has also begun adding additional features and quality control measures that will give the EVM even more credibility. Read More…

The Telos mainnet is now supported for deposits & withdrawals on the KuCoin Exchange. Token holders can send their TLOS to mainnet in an easy way and interact with all the dapps and tools that the Telos ecosystem offers. This is a big step in massive adoption of Telos, offering a seamless onramp for users around the world. Learn How…

Telos has been added to the CoinPayments platform. This tool makes it easier than ever for businesses and merchants to accept TLOS as a form of payment in an intuitive and streamlined fashion. Bringing real world users into the world of crypto is a primary goal of the Telos community and this platform helps users pay with crypto, no matter what their experience-level is. Read More…

The Telos Foundation marketing team has recently onboarded even more partners to help tell the world about Telos! These new additions will be key in meeting our marketing goals and supporting the ecosystem in an efficient way. These new members are just getting started, so stay tuned for a full announcement with more details in a few weeks’ time.

Telos In The News

Below are just a few of the many noteworthy features that Telos received in the past month:

While many areas of the blockchain industry experienced some hurtles this month, Telos continued pushing ahead with progress being made on all fronts. Here are the highlights:

As we work toward mass adoption, Telos continues to welcome partners operating in every area of the industry and if you want to get involved, we’d love to hear from you! We’re consistently looking for innovative projects, industry partners, new investors and everyone else in between. If this sounds like you, drop us a line here!