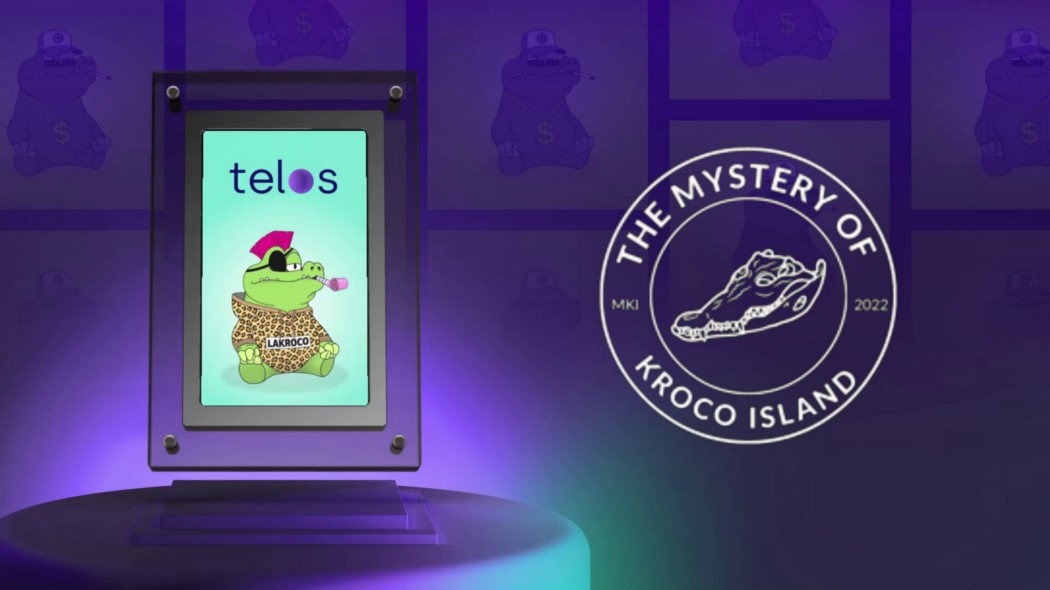 The Mystery of Krocos Island is the newest NFT project to launch on the Telos network. It’s composed of 4,444 animated crocs created by the project’s artistic lead Yava Studio. His years of experience and education in fine arts and graphic design laid the groundwork for this eventual transition into the NFT space. The collection itself was inspired by images seen in iconic film and gaming franchises such as Indiana Jones, Tomb Raider, and Tales of Monkey Island.

But make no mistake, while these scaly digital reptiles may take cues from pop culture images, they have a personality and urban style all to their own. The three-person team behind this project includes Yava (as previously mentioned), Rocky (Software Engineer), and Le Krock (Marketing and Community Manager). Together this trio prides itself on its commitment to developing an NFT project that leverages the speed, cost-effectiveness, and carbon-neutrality of the Telos EVM, greatly benefiting the Krocos community.

The dev team behind Krocos is currently in the second stage of their roadmap. A newly updated website is set to deploy soon, and a successful partnership with Fortis Coin was recently announced, with more on the way. Additionally, the Krocos team understands that utility equals growth in the world of NFTs. The team is eyeing clothing brands to incorporate and collaborate with to give Krocos NFT owners extra added benefits and rewards.

We had an opportunity to chat with the Krocos team and pick their brains with a couple of key questions that we would like to share with you!

What Makes Your Project Unique?

Whenever we talk about NTFS, it is essential that they are linked to a utility that adds value to them. In our case, the community always comes first. Therefore, one of our primary objectives is to ensure that the community is part of the collection, has a say in ecosystem decisions, and makes certain that all suggestions are considered. We want all community members to feel like they are an integral part of the growth process — because they are!

We have a lot in store for our community, for whom we thank wholeheartedly. Second-generation Krocos are already being drafted, and 3D models are developing for early holders. We’re also exploring the idea of merchandise for holders because who wouldn’t love to rock a cool Krocos hoodie?

Lastly, we are developing the idea of launching a token with which to benefit our holders with Airdrops and the possibility of generating extra revenue through staking.

We have chosen Telos because it is the most powerful network on the Blockchain. In addition, we don’t want our users to fall asleep while minting an NFT.

The Krocos Island NFT collection is a group of 4,444 stylish crocodiles built on the high-powered Telos EVM. The Krocos team is currently carrying out key objectives in both development and partnerships to foster maximum growth and enable its community to reap the benefits.