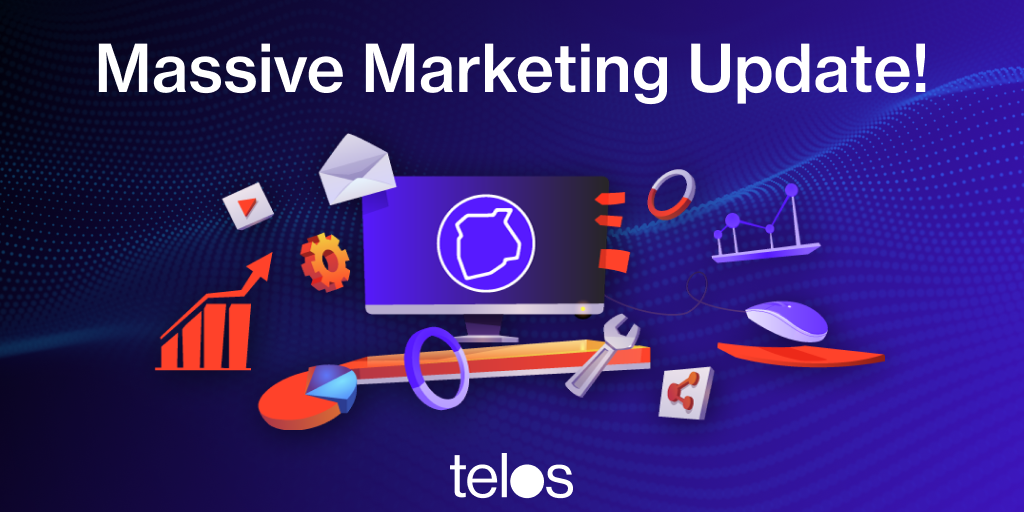 The Marketing & Community Growth department has gone through some major changes in the past two weeks, and we’re excited to get the community up to speed ! This is going to be a huge update, with a ton of information. So, if you don’t have time to read the entire announcement, jump to the end for the highlights.

We’ve had several big changes to the operations of our department, including new personnel. Justin Giudici is transitioning out of his responsibilities as the current CMO to focus more on work in the Product Department. However, he will still be involved in the current marketing efforts for some time. He’s done an amazing job of scaling this department and helping to bring in the personnel listed below.

We’re extremely grateful for Justin’s tireless work for Telos over the years and for being such a key player in its growth. We look forward to our continued work together and will share more information about Justin’s new responsibilities later in this article.

Below are the major changes to our in-house structure and newest team members.

Lliam has been involved with the Telos Foundation on the content creation and SEO front, since the middle of April. At the start of this month, he began transitioning into Justin’s role as the new Head of Marketing & Community Growth. He has an extensive background in content creation, SEO and organic growth, working with business, artists and influencers from around the world.

His experience working with startups and scaling grassroots businesses makes him an ideal person to lead this team during such an important period of growth for the Telos ecosystem. In addition to all of this, he has a passion for Telos and is excited to continue growing an engaged community at an exponential rate.

Jenna attended the world-renowned Music Industry Arts program at Fanshawe College. She was awarded the Terry McManus Business Award in her first year and the MIA Spirit Award in her second year. Upon graduating from Fanshawe at the top of her class, Jenna was subsequently awarded the 2018 MusiCounts Scholarship of Excellence in the Music Business.

Jenna is currently the Head of Operations for Lawson Vocal Studios, Canada’s top Vocal & Performance studio. She is constantly working with top music industry professionals from around the world. Jenna will play a key role on our team from an administrative and operations standpoint. This is integral to ensuring accountability and transparency for our entire department.

Thomas is an expert in communications, in every sense of the word. He has an extensive background in journalism, working for several newspapers, radio stations and TV stations over the years. Additionally, Thomas has experience in online event coordination, social media management, community planning, copywriting and content creation. His initial involvement with our department is in written documentation, announcements and social media management. However, we’ll be quickly growing his responsibilities to assist in community events and postproduction.

In addition to our newest core team members, we’ve brought on several advisors that will be working with Lliam on a regular basis, as key consultants in all our efforts. Their involvement includes offering expertise and guidance on important decisions, helping to steer the direction of our department in an effective, unbiased manner.

Currently, Justin is continuing to work alongside Lliam in a gradual transition of department oversight. After the fact, Justin will still be involved in the marketing efforts from and advisor standpoint. Justin is one of many early co-founders of the Telos Blockchain Network and brings over a decade of experience in product development initiatives. He has been pivotal in the network’s ascension to one of the most utilized blockchain in the world.

Debi has worked as an Executive Leadership team member at high performing technology focused startups for over 15 years. During this time, she has been intimately involved in the development and execution of the business road map which produces demonstrable results. She’s a strategic leader with tactical knowledge in planning, directing and implementing multiple successful teams and large budget projects with measurable ROI.

With a focus in eCommerce, digital and direct marketing, as well as customer experience and sales operations in the fast-paced organizations, she possesses a broad experience and successful history of developing teams that deliver continuous improvement and exceptional internal and external customer service. Fast growth companies provide a rewarding challenge for her.

Erika Elder is a highly efficient and collaborative Operations professional with a background in video production, hospitality, and non-profits. She has worked with companies such as Microsoft, Audi, and Amazon to coordinate and produce a diverse range of local and national video projects. Before moving to Seattle, Erika attended Oakland University in Rochester, Michigan to study Communications.

Many of our community members have probably already heard about the Appics team and their innovative social media app that’s being built on the Telos blockchain. Given that they’re experts in social media and branding, we’re excited to announce that they’ve partnered with our marketing department as a key resource in this area. With the upcoming launch of our new website, they’ll ensure that our branding is consistent across all our channels. Additionally, they’ll be working alongside our in-house team to create effective social media campaigns, graphics and video content.

We’ve only recently started strategizing at the top of this month, but they’ve already created some epic content that we can’t wait to share! The community can expect some of these pieces to start going live on August 2nd. We’re grateful to be working alongside a talented agency, that’s just as passionate about Telos as we are!

North 6th Agency was recently brought in by Michael Anastasi, the Telos Foundation’s Director of PR & IR. Our department will also be working closely alongside them, so we figured this is the perfect time to introduce them to the community. They are a big player in the world of PR and will play an integral part in helping us tell the world about Telos. Learn more about them and the team awesome team they’ve put in place to work with us below!

N6A was founded in 2010, and has grown to become one of the fastest-growing and leading public relations firms in the world. Since their inception over a decade ago, N6A has worked to address pain points of CMOs, CEOs and brand marketers and has a proprietary process that drives results that actually drives business outcomes. N6A has been recognized as one of the most innovative company cultures in the United States, having been named to PR Week’s Best Places to Work, Observer’s 50 Most Powerful PR Firms and Entrepreneur’s Top Company Cultures in America.

Kayla Perkins is an account director at N6A, responsible for day-to-day communications, media outreach and strategic guidance. She’s been in public relations for nearly a decade and began her career in house at BlackBerry in enterprise sales for its cybersecurity software arm. From there she moved into the agency world, representing a variety of startups in B2B SaaS technology. She’s represented clients of varying specialties including cybersecurity, fintech, e-commerce, IT, blockchain/ crypto, cloud computing and more. Her extensive media relationships regularly land placements for clients across top-tier and trade outlets including Forbes, Business Insider, WIRED, Wall Street Journal, Bloomberg and Fortune.

Calen McGee is an account executive at N6A and he is responsible for assisting in day-to-day communications, leading media outreach and strategy. He has been involved in public relations for almost three years and got his start at Prosek Partners. From there, he maintained positions at Clarity PR, and Mission North and has worked across a number of B2B industries ranging from SaaS to logistics. He has a passion for writing and storytelling which he loves to utilize for his clients at N6A. In his spare time, he loves to play video games and cook.

Wesley Hamed is an account coordinator, responsible for supporting program infrastructure and media relations efforts including daily research, media monitoring and maintaining detailed contact lists. She has experience working with clients in fintech, consumer tech, IT management and cybersecurity. Prior to N6A, Wesley interned at TBC Advertising Agency and Planit Advertising Agency. While at TBC, she conducted extensive industry research and built white space reports to support client strategy. Wesley currently resides in Maryland with her dog and Peloton bike.

These are only the newest additions to an already massive team of dedicated professionals and community members, working to grow the Telos ecosystem every day. In order to help lead this team effectively and start building out some transparency in the direction of the Marketing & Community Growth Department, Lliam has established a set of Guiding Principles which will be used as an internal compass in all our efforts.

This is a living document that will be used to represent the current state of our department and goals that we are striving to accomplish. The primary mission statement for our department is to “grow an engaged community, with honesty and transparency, until we are a household name, because everyone should be talking about Telos.”

This is one of many pieces of documentation, that will be created and passed along to the community as our marketing plan evolves over the coming months. Over time, we will be working towards building out as much transparency as possible within our department and the rest of the Telos Foundation. This will be a gradual process, as we also recognize the immediate need to support the ecosystem from a marketing standpoint. We appreciate the community’s patience in all these areas, as our department grows with them.

Last on the agenda for this announcement is an update on our new website. We know our community is anxious to see it and we’re excited to share it with you!

The previous team has been working tirelessly on this project for months and have done an amazing job! Initially July 15th was put forward as the launch date for this site, but during the transition of team members, some internal timelines have changed. We received the keys to the new website on Friday and are continuing to work alongside the previous team to get it online as soon as possible. We want to ensure that our community is properly represented with this important identity piece.

After assessing the remaining workload for our team, we are confident that we can have the new website launched by August 2nd. This will allow us the necessary time for some final quality control. It also aligns with a timeline that will allow for the rebranding of our social channels in tandem with the launch.

There have been some minor style changes to the branding of Telos during this redesign. Because of this, we are currently preparing an updated style guide to go along with the new website. Once complete, we will be putting this important identity piece up for community vote. In this way, we can ensure that this new direction represents the community properly, before we push the branding on channels that are outside of our control.

In the meantime, check out the sneak peeks below!

Whew! That was a lot, and we barely scratched the service of our plans to continue growing an engaged community. Here are the highlights if you didn’t have time to read the entire article:

We know that there’s still a lot which hasn’t been covered in this update, such as our upcoming EVM marketing efforts and the upcoming Telos Board elections. We assure the community that we are constantly listening to your concerns and will work to get you more information in all of these areas, and more, as soon as possible.

We’ll have more news for the community in our end of the month newsletter, if not sooner. Thanks for your continued support in our efforts to grow the Telos ecosystem.