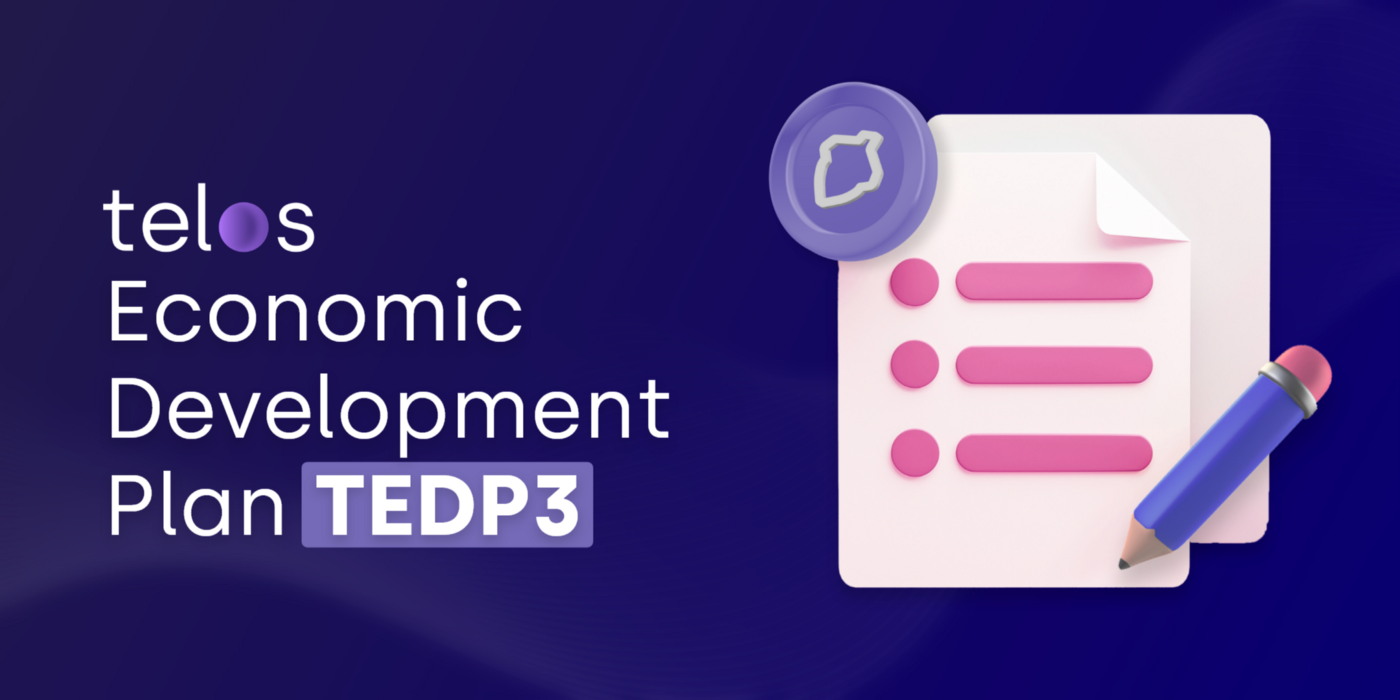 TEDP3 establishes the framework to “fuel” Telos’ most impressive period of growth to date.

This is a TLDR version of the full proposal.

Telos has steadily built in all areas for over four years since the project began, expanding our technology, value and community in important ways. The Telos Foundation, Telos Board and Telos Core Developers continuously monitor the current economic state of Telos, the broader crypto industry, and the world to take advantage of our unique opportunity as a nimble, user-governed blockchain. In a joint effort, we propose revisions to our economics to thrive better under the current and expected economic conditions.

The Telos Economic Development Plans (TEDPs) aim to find consensus within the community around approaches to breaking through impediments and addressing economic opportunities to advance Telos. The TEDP3 is the latest approach to this. With it, we seek to face challenges, assess features that are not increasing success, and take advantage of a clear opportunity to improve Telos's capitalization and grow faster.

Despite our proven innovation, superior technical specs significantly increased staff, and aligned and supportive community, Telos has yet to achieve a market capitalization even 1/100th that of EVM blockchains with speed, capacity and demonstrated resilience far below what Telos offers. There are a number of economic challenges that we have identified that must be addressed before we can do this.

Telos has the world’s fastest, highest capacity Ethereum Virtual Machine (EVM) and the only EVM that prevents front-running (a.k.a. MEV), which is one of the most intractable impediments to greater EVM adoption. From observing several other EVM-type projects recently, it appears that increasing TVL also increases the market capitalization of the chain itself in a powerful and relatively predictable way.

We have the opportunity to take advantage of this pattern in an attempt to bring the market value of Telos more in line with its relative utility and technological value compared with other top smart contract platform blockchains. To do so, we intend to refine Telos's economics in several ways that eliminate some costs while increasing the spending in others in a Keynesian economic model intended to foster growth in specific areas that will incentivize an increase in TVL and, as a result, TLOS market cap.

Via an aggressive monthly distribution of 1.7m TLOS, the Telos Fuel Liquidity Incentive Program will stimulate DeFi and CeFi activity in the way that networks like Avalanche (With Avalanche Rush) have done in the past to great effect. You can read more about Telos Fuel here. The core premise is simple — Liquidity Fuels Growth — the impact of such a program is expected to be far beyond DeFi alone.

Read about the Exciting Telos Fuel Program and the new team being established here.

When Ignite was first launched, a small portion of the total 12m tokens was allocated to support initial capital deployment, however, a full funding plan was never put in place, with the expectation that a future solution would be designed. By Establishing 500,000 TLOS/month funding specifically for Telos Ignite (Grants and Ventures), the team will be able to deploy capital at a much higher rate than we have been able to previously and fully fund the program.

We wish to boost TCD funding by 100,000 TLOS per month, so they have adequate funding to help retain Telos’s place as the most advanced L1 in this industry.

Simplified Staking with 10-day lockups on native and tEVM

By adding a 10-day lockup on Telos Native (to match telosEVM), we gain simplified communication around Telos staking and add appropriate risk/reward parameters to the activity that benefit the network greatly.

A small but greatly impactful economic change — allows the network to give away user friendly accounts without a sybil attack concern.

Token holders have indicated confusion around our current Total and Max Supply. Reducing the Total Supply to a round 355 million tokens (from the current 355,208,670.6674) , is a small change that results in a more memorable number to communicate. Reducing Max Supply from 10 billion to a more realistic 1 billion alleviates concerns of stakeholders who don’t understand how the Telos Network works as a DAO.

If the Telos community votes to pass the TEDP3 Telos Amend proposal, it will amend the TBNOA (Telos Blockchain Network Operating Agreement) governance document and instruct the Telos block producers to enact and facilitate the following actions:

Amend Clause 49 of the TBNOA as follows:

The overall intended economic impact of the TEDP3 is better to align the deployment of capital from our reserves to support high-impact initiatives, including liquidity, incentives, grants and development funds, to unleash rapid economic growth and attract greater participation from the broader crypto economy.

Are you excited about the opportunities TEDP3 creates for Telos? Discuss the economic plan in Telos Governance and prepare to vote on September 23!