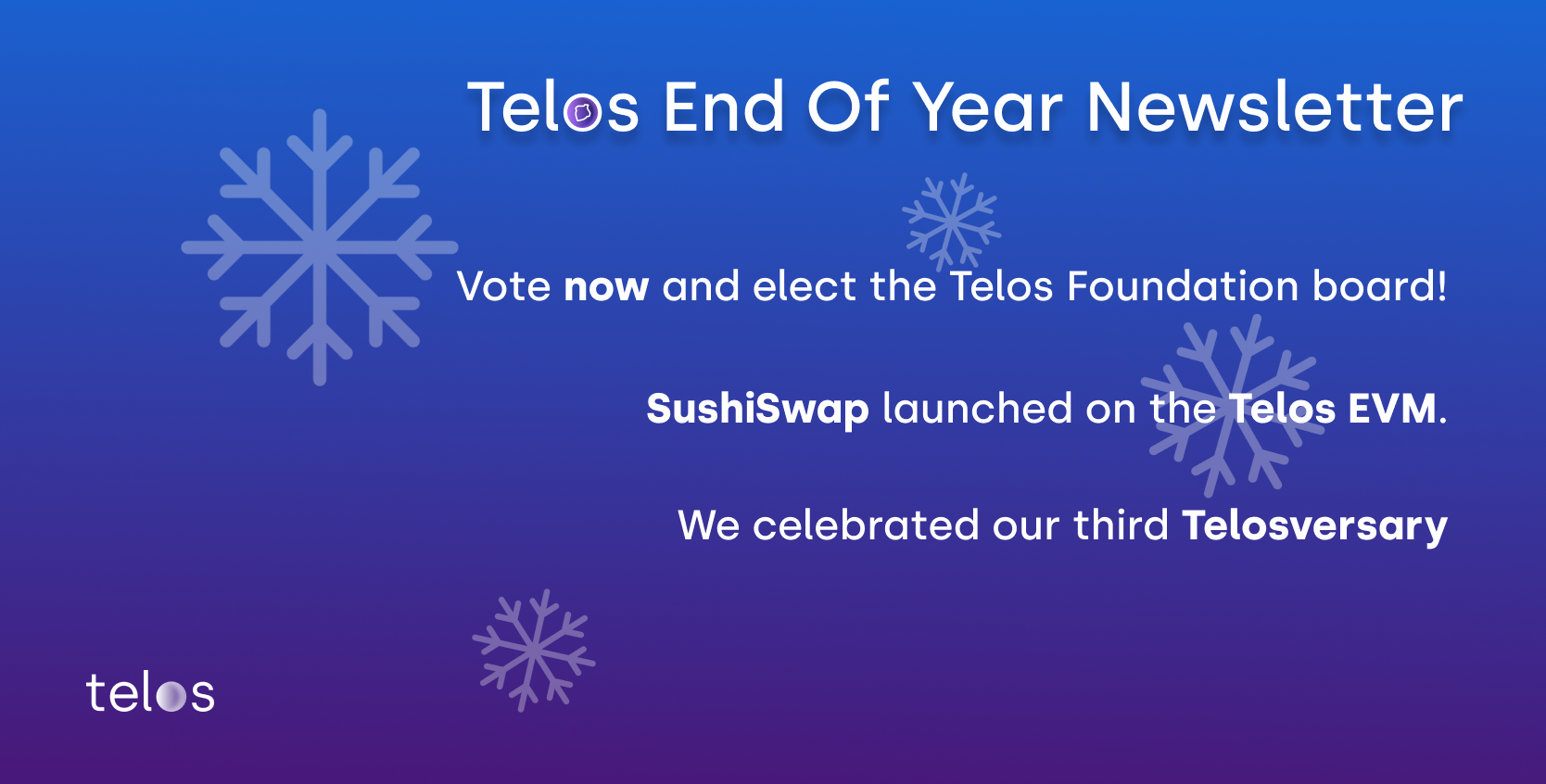 The year is over - we all made it here! It’s time to go over another exciting few months of news for the Telos community. And we’ll even show you how you can get involved right now by voting in the Telos Foundation board elections.

One last thing to keep your eye on - our Telos 2022 roadmap! We’re finishing up the last few details to make the roadmap shine. Look out for that within the first week of January!

The innovative Telos EVM has been live since November, bringing lightning-fast DeFi and more to the world. But another huge milestone recently passed: the Telos mainnet’s third birthday! Read on to learn more about where we’ve been the last few months.

If you’re short on time, jump to the end of the article for bullet points!

Vote now and elect the Telos Foundation board!

If blockchain governance gets you going, the coolest thing you can do now is vote in the next Telos Foundation board using the innovative Decide engine!

You can cast your vote until January 4th - so you’ve still got time. Once the 4th rolls around, the election will be complete and our new Telos Foundation board will be elected!

How do I vote? And who should I vote for?

We’re glad you asked. You can read up on the candidates here and see what skills, backgrounds, and experiences they will bring to the Telos Foundation.

You can vote for up to nine candidates by following along with the video tutorial below. Thanks to The Telos Crew for showing us the ropes!

DeFi on the Telos EVM

‍Telos announced major DeFi partnerships in the past few months following the launch of the Telos EVM. The Telos EVM is one of the fastest EVMs on the market, with just 0.5 second block times, which means trades are instantaneous. Let’s recap how these pieces fit together!

Sushiswap deployed on the Telos EVM, allowing users to take advantage of Telos EVM’s ludicrous speed, and scalability. And, best of all, no front running on the Telos EVM! These qualities have been incredible assets for users trading crypto on SushiSwap.

Another exciting announcement has been our partnership with Multichain, formerly known as AnySwap. This partnership has let our community members easily move tokens like USDC, USDT, ETH, BNB, MATIC, FTM and AVAX  to and from the Telos EVM. This bridge has opened up incredible opportunities for decentralized finance (DeFi), NFT purchases, and much more!

Let’s recap one last awesome event before we close off this recap - and you can get back to your new year’s celebrations.

We celebrated our third #Telosversary.

Telos recently passed its third year of continuous block production on the mainnet - our third #telosversary! We ran a number of events on YouTube and Telegram Video to celebrate with our community. We also commissioned prominent Telos NFT artists to create special Telosversary NFTs to celebrate.

The resounding sentiment was that our third Telosversary came at a critical moment for Telos’ growth. Spending time reflecting on our roots and looking forward to our future gave us the inspiration we needed to continue the hard work of improving the Telos ecosystem today and everyday. We can’t wait for #Telosversary four !

We know our Telos community members are busy. Here is everything you need to know about what the last few months of 2021 brought to the Telos ecosystem:

We’re so excited to see what 2021 holds for our community! Thanks for sharing this year with us - and make sure to go vote for the Telos Foundation board. Stay tuned for the Telos roadmap for the year ahead, dropping soon!