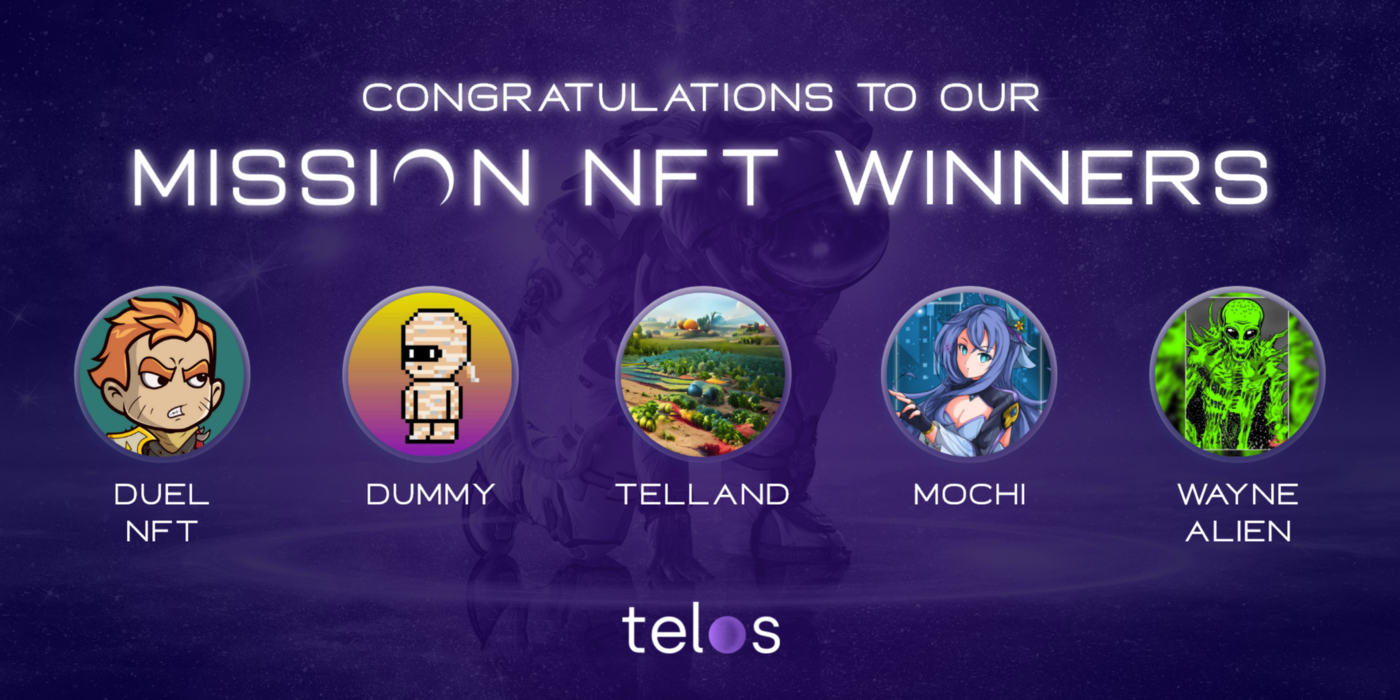 After months of planning, project submissions and vetting, public voting, and Telos’ judges voting, the Mission NFT contest has reached its finale — with the announcement of our Top 5 winners.

Mission NFT was Telos’ biggest contest to date. Together with the TAIKAI Network, Mission NFT provided digital artists with a platform to showcase their talents and debut their collections for the NFT community to see on the world’s most powerful EVM. Our public voting round narrowed the field down to 20 finalists, of which our Telos judging panel selected the top five winning projects.

So now, without further ado, Telos proudly presents the winners of the Mission NFT contest and the prizes awarded to each project.

Please note that rarity and supply are still under consideration and subject to change.

Adding to Mochi’s uniqueness are the non-generative traits of its cards. While many collections feature X thousands of generated images based on hundreds of layers, a team of three anime designers conceptualizes and designs each Mochi NFT individually, thus making every digital asset in this collection a unique work of art. The characteristics of each anime figure featured in this collection (i.e., color, theme, accessories) take inspiration from several popular crypto tokens.

Minting is set to begin next week! Stay tuned to their Twitter for the official announcement.

Have you ever wanted to own an NFT that reflected your personal tastes and styles? Meet Build-A-Dummy by Dummy DAO, a customizable NFT collection that lets users mint the Dummy of their dreams through two separate mints:

The list of items/accessories users can select includes different eyes, hair, hats, bottoms, tops, mouths, and rare animated items such as changing eye colors, live smoking cigarettes, motion features, and more! Additionally, users can continue to modify their Dummy over time and access DMMYWORLD, where NFT owners can engage with other players in a live 2D simulation game.

Minting is set to begin next week! Stay tuned to their Twitter and website for the official announcement.

Duel of NFTs is a project that lets users mint NFT heroes and equip them as they face off in a PvP RPG game. After minting a hero, players can train their NFT warriors and venture into unknown lands to discover powerful weapons such as swords, maces, bows, shields, and wands that offer magical powers. A variety of physical characteristics allow each hero to be born unique from the others in the collection. This includes traits such as gender, eye color, skin color, race, hair color, eyebrows, beards, facial tattoos, tattoo color, and race. Once minted, players can take to the arena to increase their hero’s fighting ability and work their way up to Champion status.

Minting is set to begin next week. Stay tuned to their Twitter and website for the official announcement.

Alien Collection is the inaugural NFT series by Wayne Sheppard, an accomplished artist whose journey into the art world is equally as mind-boggling as it is inspiring. It comprises five collections with 100 NFTs each, featuring unique attributes and rarities that offer utility for a future NFT game. The first five (of a potential 20) Alien Collections will be:

As previously mentioned, Alien Collection NFTs will offer additional utility when using the Journey Builder, a framework created by Destiny World and Fortis under the joint brand Destiny Airlines that aims to connect blockchains and ecosystems with a portal to a gamified metaverse.

Minting is set to begin next week! Stay Tuned to Wayne Sheppard on Twitter for the official announcement.

The final winner of the Mission NFT contest and winner of the Big Gooey’s Pick is Telland NFT. This philanthropic collection sets out to boost agricultural production for South American farmers.

Telland connects 100 digital land parcels with the physical world based on a hectare of land located within the Proyecto Ecológico Nuestro Paraíso in the Northwestern region of Piura, Peru South America. The NFTs in this series feature stunning artwork inspired by the coastal area of Peru. Fertilization of the soil in Proyecto Ecológico Nuestro Paraíso will commence after the collection of 100 NFTs is sold or 30 days after minting starts.

Minting a Telland NFT contributes to the livelihood of farmers associated with the project, and as a holder, you also contribute to the betterment of the planet by creating a market for healthy and sustainable produce. Furthermore, Telland NFT does not utilize a third party or middleman. Instead, users are connected directly with the project and are updated on all progress made.

Users that mint one or more Telland NFTs will receive annual rewards in perpetuity, financially backed by the revenue generated from the South American farmland. Currently, only 100 NFT parcels of land (priced at $150 USD in TLOS tokens each) are available to mint. The rewards payment breakdown is as follows:

Users can mint their Telland NFT here to own collectable artistic digital assets representing physical land. In an era where land ownership has become increasingly costly and complicated due to endless paperwork and bureaucracy, Telland provides the DeFi community with access to physical real estate that generates passive revenue.

Mission Completed, Signing Off
Telos congratulates all of our winners, and we would like to thank all participants that helped make Mission NFT our biggest and best contest yet! This includes creators and our community for their unwavering support. A special thanks go to our platform of choice, the TAIKAI network, for enabling us to connect Mission NFT to a wide audience. Finally, a special shout-out and praise are in order for Telos’ NFT curator, the Big Gooey, who provided invaluable guidance for our team and contest participants.

We look forward to sharing more exciting news and updates on each of these NFT projects in the coming days and weeks ahead. If you’re an NFT creator and are ready to mint your collection on the world’s fastest and most affordable EVM, please contact the Big Gooey to get started.