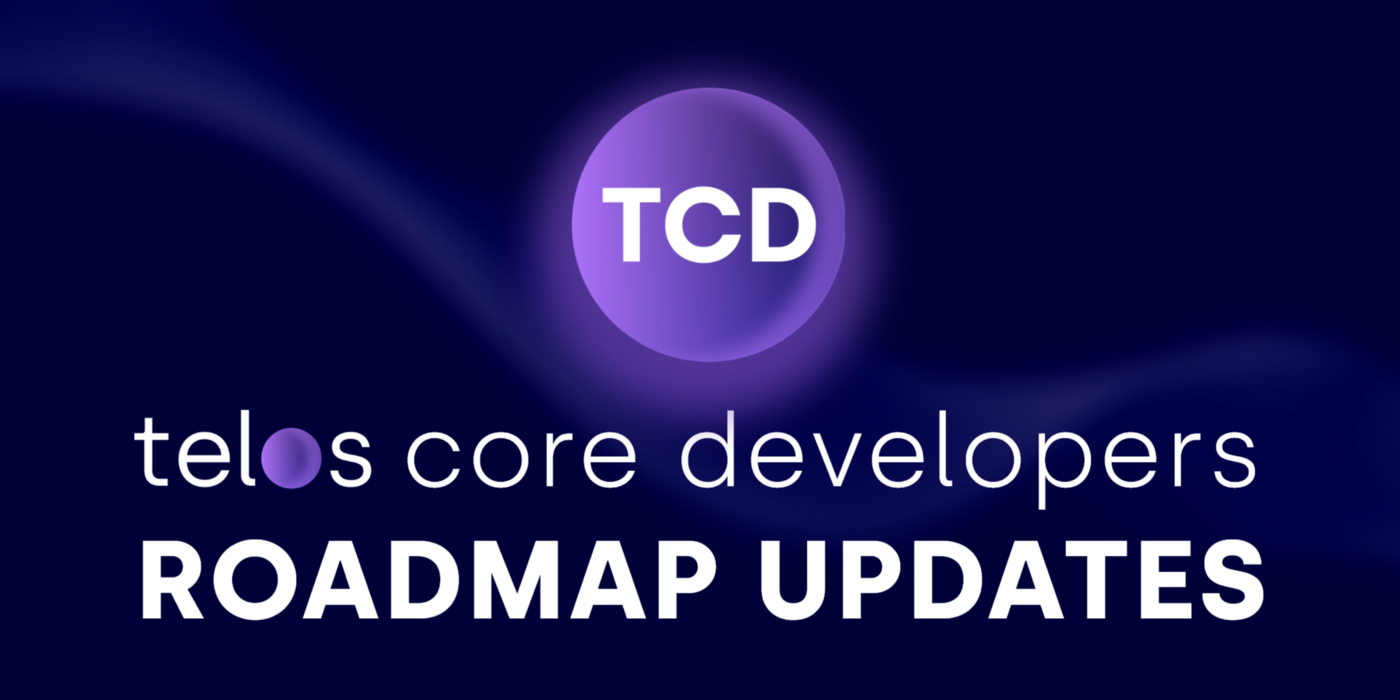 Riding the Bear — Time to build!

Welcome to our Telos Roadmap, which has recently been updated based on our Q2 2022 review and Q3 outlook!

Since our last roadmap update, the world around us has changed dramatically. Not only have we entered a brutal bear market, but the overall geopolitical situation and economy are riding a wild rollercoaster. While this also impacts the Telos Foundation (TF) and Telos Core Devs (TCD), we opted to take action and follow the path we took when we were born inside a different Bear Market — Build and deliver leading blockchain technology and solutions!

Douglas Horn recently stated: “The TCD made extraordinary progress in Quarter 2. All organizational changes, the addition of staff, and our great minds have made Q2 probably the best quarter for us!”

Times like these provide an excellent opportunity to evaluate priorities, vision, and requirements. Taking a step back is what we have done for Q3 and Q4. This assessment resulted in a further streamlined roadmap with an undeniable focus on core technology and tools for our native Telos network and industry-leading tEVM.

We are proud to be a very active member of the EOSIO Coalition, which was founded to secure and develop the core code of our native network. The joint contributions of the workforce and budget allow us to achieve significant progress and innovation hardly seen in our space.

The development focus and requirements for tEVM and Telos Native are very different; therefore, we continue to differentiate the two areas to accommodate the relevant items.

You will recognize some changes to the “Future” section, which is our backlog of items continuously re-evaluated for future developments of the Telos ecosystem.

Please follow our bi-weekly TCD development updates, Telos Tech Talk AMA, and our frequent Marketing and Business Development updates. Stay up to date about all these significant initiatives.

TCD resources are the key driver for developing and supporting Telos Foundation initiatives. We have scaled and re-organized the TCD and reached a total number of 19+ developers and program/product/project management resources.

The official Telos support, Telos Knowledge Base, is now well established and the first point of entry for any user having questions or account issues. Our team utilized significant resources to rework our native and EVM documentation on https://docs.telos.net; furthermore, we have added various articles and restructured the page for easier access.

Updates on our Roadmap

The native layer one Blockchain remains the backbone of Telos. With significant resources deployed to tEVM, we continue to drive various initiatives to improve our apps and protect and improve our codebase.

We are working on upgrading to the latest core-code release, Mandel, which is now very close to completion after some slight delays. We have deployed most of the code on Testnet and are undergoing testing. The release will include bug fixes (REX) and expected improvements to some governance smart contracts and geography-based Block Provider schedule optimization, which improves the assignment of BPs in operations.

Telos actively contributes to a consortium of Blockchains. Next to EOS, WAX, and UX, we are developing and protecting our core code. Activities focus on four core areas:

The initiative will contribute to significant improvements such as:

A long-anticipated change of branding will be released in Q3. We can’t wait to leave the history of EOSIO behind and begin a new journey into a tremendous future driven by cooperation and partnership!

The team is re-assessing the designs and user experience of our apps and websites. It re-imagines the user journey and chain interaction to support “grandma-wallet” and the pro-user experience.

We continued our developments on OBE to ensure the availability of an open-source tool for Telos native. Q2 saw the release of the following features/updates:

Our subsequent iterations will include:

OBE is already close to being the one-stop shop for all Telos native Blockchain, next to our Web Wallet.

Arbitration, a vital component for a working governance system on Telos, is well underway. Updated smart contracts and user interfaces are under development to deliver a leading arbitration infrastructure that allows on-chain resolving of disputes and account issues. The voting process for our initial arbitrators will begin shortly after the deployment of these smart contracts.

Next to a new release of the Decide Voter mobile app from Goodblock, a total rework is in progress for app.telos.net, our governance website. With these two options, we will significantly improve the accessibility of our governance to the community.

We are thrilled about EVM 1.5 and 2.0, as both releases demonstrate our strength in developing cutting-edge solutions. EVM 1.5 will offer user-facing compelling improvements, while EVM 2.0 delivers a revised backbone, creating excitement in our developer community and dAPPs.

EVM 1.5 is an exciting first step toward the future as it includes various upgrades and user experience modifications.

Our brand-new indexer is a crucial component of this release. It enables further improvements and additions to Teloscan, including a token overview, holder lists, and performance improvement for various services. Furthermore, EVM 1.5 will deliver some initial amendments to the current architecture, such as enhanced UX for TLOS and wTLOS transfers and a revised block header architecture. Finally, we will re-index our chain once deployed due to significant changes.

As a result of our sTLOS and EVM 1.5 developments, we will also be able to offer a native, non-custodial bridge feature very soon.

Telos EVM remains miles ahead of current competing Solidity solutions, and Telos EVM 2.0 will guarantee that Telos continues to offer unmatched power for Ethereum-based applications decades into the future.

Our team continuously develops and makes immense progress with the components and concepts. We will keep you posted!

Our Etherscan substitute received various updates on the contract read/write interface, which now also allows the import of ERC20, ERC721, and JSON ABIs for unverified contracts. We are working on a thoroughly revised token and owner list that awaits the EVM 1.5 release. Further improvements are created “under the hood” related to performance for the coming release. Additionally, the design process for sTLOS integration and interaction with our new indexer service will begin soon.

The opportunity to bridge tokens between EVM and Native is now operational on https://www.tswaps.com/bridge/. Trading tokens on EVM and Native with combined liquidity is mandatory; therefore, integrating a bridge to T-Swaps 3.0 was crucial. Y-Knot has performed an initial audit and released this feature in Q2.

We are delighted to announce that we are bringing staking to the Telos EVM. REX “Staking” is a tremendous investment opportunity for Telos Native. This new option also allows our EVM users to access attractive rewards.

Our sTLOS is based on the ERC4626 tokenized vault standard and is balanced with native REX based on a ratio voted on by the community. It is extended by an ESCROW unstake timer contract set to 10 days and the required native REX contract to distribute rewards. Our partner and BP Sentnl performed an audit of all smart contracts.

THS sTLOS receipt token opens new liquidity to opportunities for EVM dAPPs like Omnidex, Bardi, and Zappy. We are excited to see incentivized staking pools/farms and lending/borrowing based on sTLOS.

Telos is paving the way to mass adoption of Web 3.0 by developing innovative decentralized solutions with real-world applications. The Telos Core Developers and Product Team determines quarterly development priorities considering needs, opportunities, and available resources. Here is what we have planned for Telos in 2022 and beyond!

An identity solution combines two significant needs for identity. The first is the need to determine the uniqueness of an individual account’s identity. The second is the ability for a user to have the information verified by third parties without leaking private information. Users can share select data with apps while controlling what they share. Certificates issued will be linked to these details. This product will be crucial as the industry evolves and the needs of governance and DeFi become more complex. The Telos Core Developers have partnered with the original developers of the Estonian National Identity system, the first and most successful blockchain identity system globally.

Telos Location allows proof-of-location using the Telos blockchain while incentivizing users to carry out “location mining” for the system. With this product, anyone can verify that they were in a specific location at a particular time. This product opens many possibilities for dApps, DAOs, and other decentralized initiatives. Telos Location is a long-term development goal and is not expected to be completed in 2022.