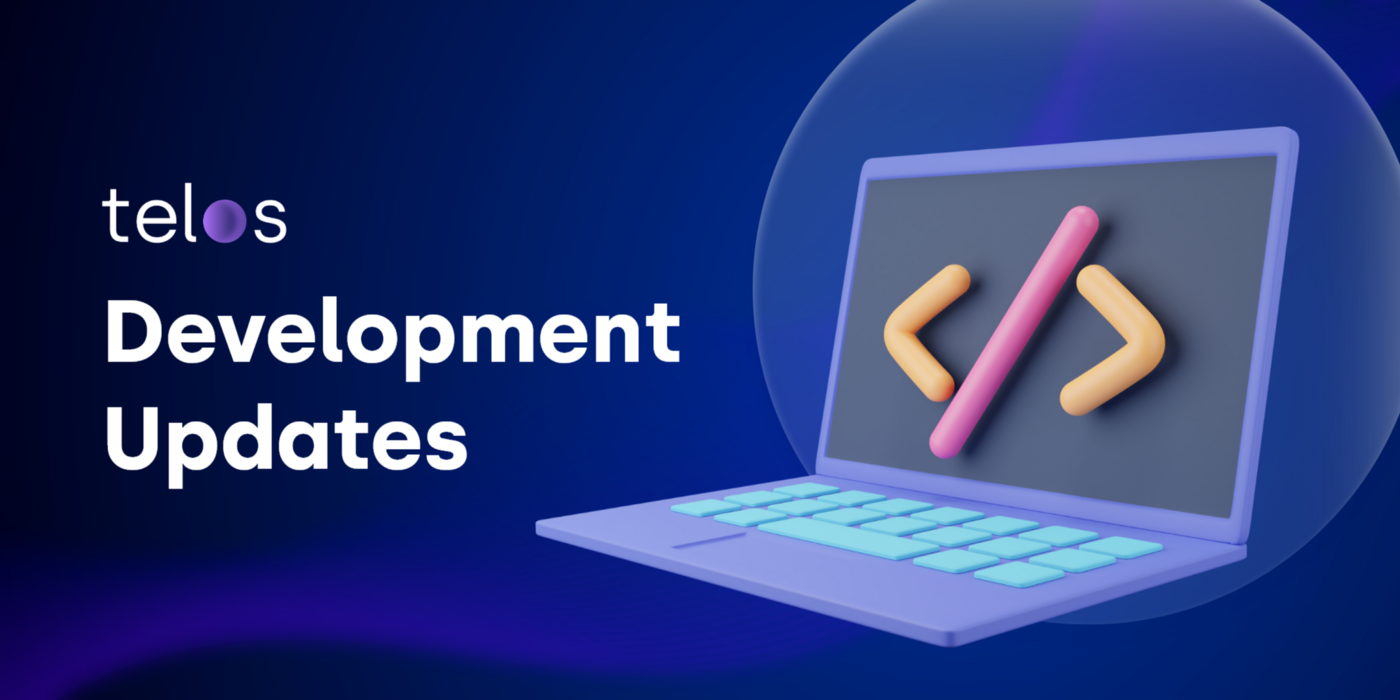 Telos Core Development is back with another update on everything we have going on under the hood on the tech side! We’ve been working hard at pushing improvements to the ecosystem, and hope to let the community benefit from them soon. There are quite a few things on our agenda today — Telos Native, EVM, Open Block Explorer, our upcoming podcast, and work on our arbitration system to further enhance the leading governance of Telos. If you’re here because you’re a fan of all things Telos, we’ve got some exciting updates for you!

On the Native side of things, we’re busy preparing the upgrade of our Testnet and soon Mainnet for version 1.9.2 / “Mandel”. This will include various backend improvements and features to lift Telos native to the latest releases. A fix to a REX-Bug is also included, which causes issues for some users when trying to sell REX.

Our work on System and Voting Contract updates is in progress. The expected BP-Payment adjustment requires work on the Oracle side to allow automation, and we are in progress to get this realized soon.

Telos is contributing to various EOSIO+ Workgroups to define organization, budget/funding, and future development processes for EOSIO which will be a key initiative for Core Code Assurance. All major chains are participating in this effort including EOS, WAX, Ultra, UX, FIO, Proton and Telos. We are investing significant time to support this initiative and are confident, that the joint efforts will allow all chains to prosper.

The EVM side has been mainly focused on optimization and improvement, with scalability upgrades and RPC server/node operator additions. We still have the EVM/RPC 2.0 proposal for open-source cooperation with EOSIO+ to be raised and smaller updates on our smart contract to be deployed following sentnl approval.

Revoke for Telos is also under improvement, with refactoring necessary to include additional transaction types in a soon-to-come update.

Teloscan will soon receive some major updates, with us adding improvements to the contract interface to enable the long-anticipated execution of contract read/write functions. MetaMask and Anchor wallet login implementation is also in progress to be added soon, allowing specific, edge case transactions requiring interaction with native Telos accounts. We will also add an endpoints/RPC server overview and made major improvements. Further Upcoming improvements will include token page enhancements such as displaying a holder list, as well as a complete redesign of the page. Further work is also performed for our contract verification to match some contract types.

Telos ID is undergoing a delay due to ongoing geopolitical situations — however, a competitive analysis has been completed and we expect to resume work on that soon.

The Web Wallet is currently being looked at for possible revisions to its design to facilitate a better user experience. Recent updates have also been very successful, with the ability to view and manage REX holdings (excluding savings) available following the last update adding support for RAM, CPU, and NET management.

Moonpay has been removed from the web wallet as NewDex decided to delist $TLOS and the required market buys could not be executed further. We ask you to please use exchanges for purchases until we have implemented a new Fiat-onramp.

Open Block Explorer development has been going extremely well with the help of our amazing developer community! As an open-source project, we’re proud to announce the second iteration is nearing completion, and work on the third is in preparation. We’ve added 2 resources from y-knot to support development and look to add initial wallet features/login capabilities, before focusing on multi-signature integration for the third iteration.

Before we sign off, we’d also like to remind you that hiring is still in progress! We’re currently recruiting for our Technical DApp onboarding/Development and Full Stack Development roles, which you can find more information on @ https://www.telos.net/careers.