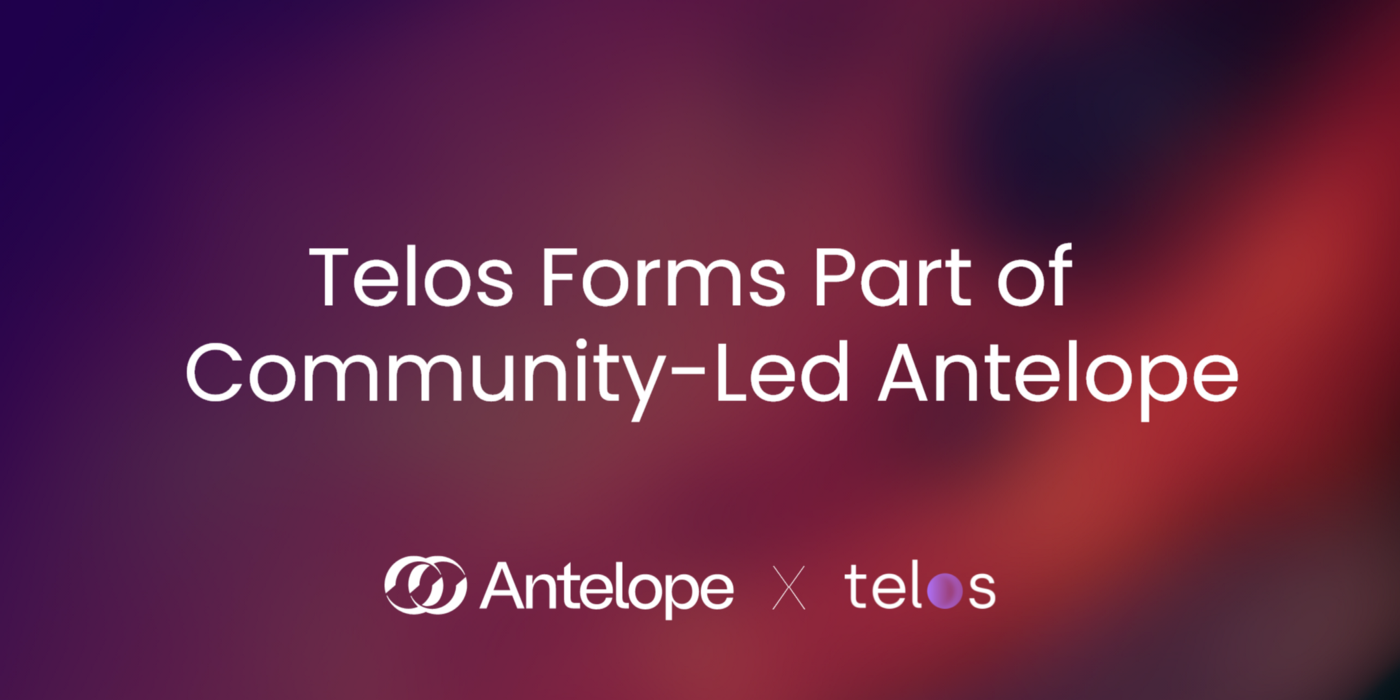 We have arrived at a historical moment in Telos’ journey following the discontinuation of EOSIO development by Block.one. Over the past several weeks, representatives from EOSIO Protocol-Based Blockchain platforms EOS, Telos, WAX, and UX held essential discussions about the future of their respective networks and how each intends to meet the growing demands of Web3 users and developers worldwide.

Today, we are excited to announce that Telos will form part of the Antelope Coalition alongside EOS, WAX, and UX Network. This coalition comprises an ecosystem of blockchains that aim to rebrand and construct a fork of EOSIO that will feature newly-added robust security protocols and innovative development technology to EOSIO’s core code.

Antelope Leaps Towards the Future

Through Antelope, blockchain developers can leverage a more transparent and efficient open framework built to power Web3 products and services such as DeFi protocols, NFTs, blockchain games, supply chain management and more. The networks that rely on its community-run codebase — which includes Telos — lead their industry in speed, scalability, security, compatibility, and ease of use.

Each member network of the coalition will commit to a combined annual budget of $8 million and make critical contributions to the EOSIO codebase. Additionally, funding for Request for Approvals (RFPs) has already been initiated, and the coalition has unveiled an array of priority items to be carried out, which include, but are not limited to:

Success in a venture of this magnitude requires strong leadership to ensure executive alignment is achieved with all parties involved. As it turns out, it was a task no better suited than for Yves La Rose, CEO and Executive Director of the EOS Network Foundation and Telos’ own Chief Architect Douglas Horn. Yves was the first to develop the rebranding concept, which allowed Douglas to set the wheels in motion and create the structure for moving forward. Through his efforts, Doug was able to merge Telos, WAX, UX and EOS networks into a working coalition.

Despite being smaller in terms of economic measurements, Douglas and the Telos team leverage their years of experience operating the Telos core developers group, providing the necessary guidance to ensure Antelope launches at full capacity. In addition, Telos CEO Justin Giudici played an integral role in the rebranding process, alongside Yves LaRose, Alex Cox of Greymass, Wyrd, and Douglas Horn, whose years of experience working with multinational brands such as Disney, Pokémon Intl, Microsoft and others provided immense value.

“The release of Antelope is the culmination of a historic effort undertaken by some of the most talented developers in blockchain, many of whom I am honored to work alongside at the EOS Network Foundation. Today, as we unveil the community-developed implementation of Antelope, we are building upon over four years of battle-hardened code and the cumulative knowledge of four L1 chains leveraging each other’s strengths — our great allies at Telos, UX Network, and WAX — all united behind the Antelope protocol. At the ENF, we’re committed to exemplifying the best that Antelope has to offer by making EOS the most powerful and usable platform for building next-generation Web3 products and services.”

“With the Antelope brand identity, we leap ahead with a protocol built by its users, for its users. Telos is proud to be a founding member of the Antelope Coalition. We bring the experience of operating our own foundation and core developer group for nearly four years, which allowed us to self-fund and develop innovative new features like Telos EVM and Telos Decide governance engine. Together we’ll launch Antelope as the most user-friendly, stable and secure protocol for building new chains that are infinitely flexible and constantly upgradeable. The future is multi-chain, and Antelope is poised to be an undisputed leader in web3 and blockchain technology. The partnership with EOS, WAX and UX networks represents a real alignment of incentives with game-changing benefits to Telos and all the Antelope chains.”

A New Chapter of Innovation

The Antelope Coalition is a monumental step forward for Telos and all other EOSIO blockchain communities. Through our combined efforts, we will put the future of EOSIO development in the hands of those that matter most, our users, and empower developers with greater channels of communication about priorities and code releases, enabling them to create their own development plans.