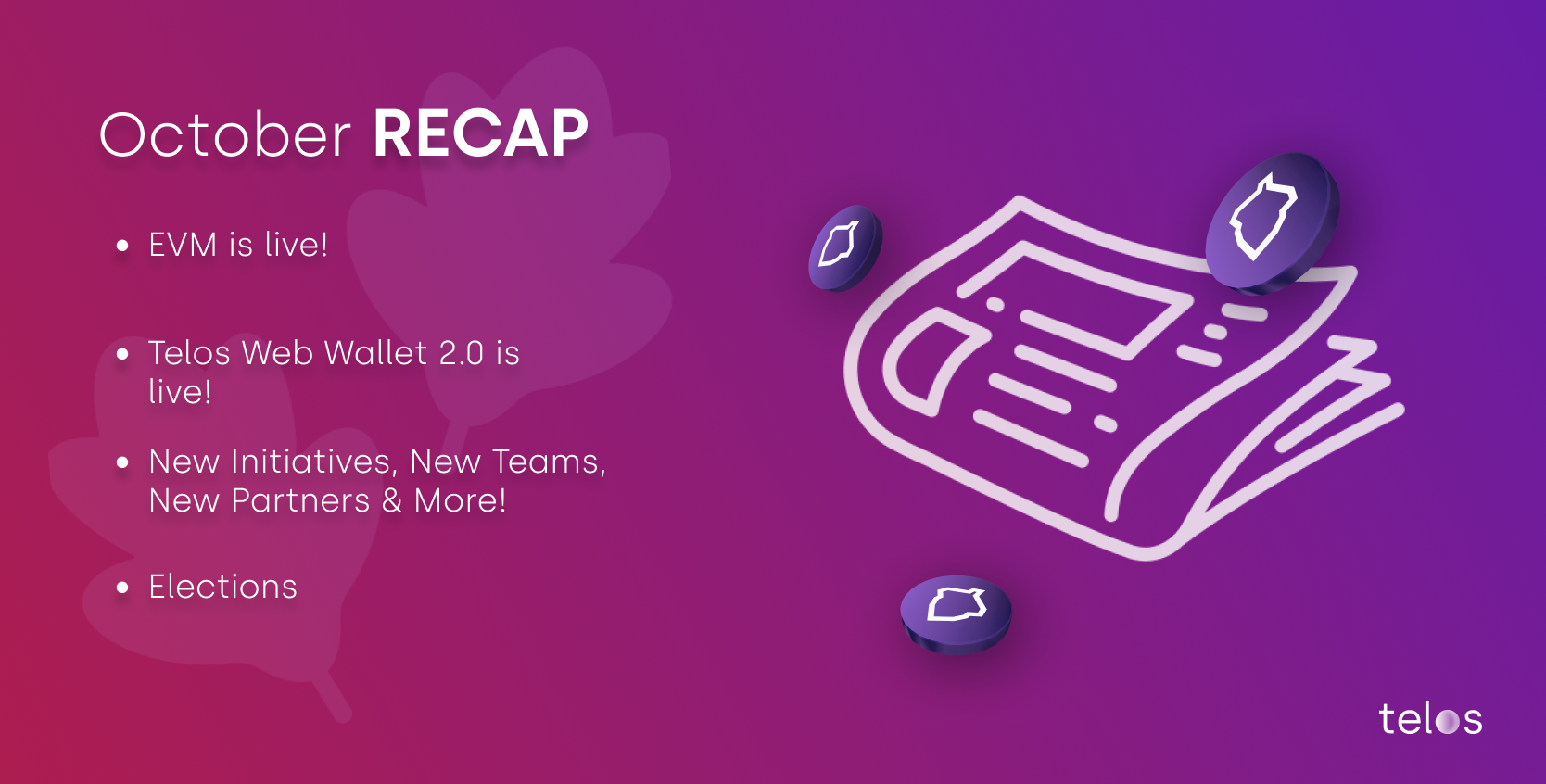 Welcome to our monthly Telos recap !

October came and went – and with it came another very exciting month of news for the Telos community !

If you’re short on time, jump to the end of the article for bullet points!

First up, the huge news that should be on every Telosian’s radar is that the Telos EVM is live ! This has been a colossal project more than a year in the making. We hope you’re as proud as we are to witness this historic moment for the Telos ecosystem.

The Telos Core Devs hit major milestones during October like receiving audit approval from Sentnl, launching the EVM mainnet multisigs, and deploying the RPC servers among others. You can follow up on the EVM roadmap here for more details on where we’re heading post-launch.

We have exciting partnerships coming up on the horizon, as well as another huge milestone that just launched… The Telos Web Wallet 2.0!

This new wallet is in line with the new Telos branding and features an intuitive way for users to move TLOS between Telos Native and the Telos EVM.

This is the first of many improvements to the Telos Web Wallet post EVM. Additions like Google Sign-in support are in the works, so stay tuned.

Beyond the Telos EVM

On top of all the exciting EVM news from October, this past month saw immense internal growth for both the Telos Foundation & The Telos Core Devs. There’s been so much growth that we don’t have time to delve into all the details here, but we’ll give you a high-level look at the news.

We’ve formalized two new departments: Customer Support, and Community Relations. Before these areas were handled by the Telos Core Devs (TCD) and the Telos Foundation (TF) Marketing Department. But now we’re growing dedicated teams so that we can deal with the incredible growth that the Telos ecosystem will see post Telos EVM.

These initiatives will ramp up throughout November, so we’ll follow up with a full report soon. Our community members will likely see some noticeable changes before then !

George Vernon, Operations and Project Management for the Telos Foundation, prepared this helpful breakdown of October’s expenses. Check out the information below for more details !

For those strong on governance, don’t worry ! We’ve been working hard on all the technical details to ensure a fair and secure election process.

The TCD resources have focused their energy on the Telos EVM launch, but they are prioritizing changes to the elections smart contract.

We’ve checked-in with our candidates and invited them to core team meetings. This will ensure a smooth transition when our new board members are voted in. The entire core team is looking forward to welcoming the new board as we grow and professionalize into Q1 of 2022.

There’s still time to run for the board ! Fill out this form if you’re interested in carrying out the Telos vision and mission.

The Telos Foundation Partnerships team has been hard at work this past October securing and finalizing a number of exciting partnerships for the Telos EVM ! In addition, October saw increased collaboration with Telos across the broader crypto ecosystem.

Let’s quickly recap each of these partnerships and note what they’ll do for the Telos ecosystem !

TelosPunks are coming to the Telos EVM !

We recently announced that TelosPunks will launch on the Telos EVM ! TelosPunks is a collection of 10,000 unique characters with all-original artworks and provable ownership on the Telos EVM. TelosPunks are an homage to the legendary CryptoPunks project by Larva Labs but with a unique Telos twist. Learn more on the TelosPunks website and stay tuned for more information about minting !

Telos is proud to announce that we’ve added support for Magic! Magic will give users the power to login into blockchain apps launched on the new Telos EVM with only their email address or phone. No more struggling to remember passwords, seed phrases, or private keys – that’s a problem for the past. Learn more on our Medium.com article !

The first AMM, Elk Finance, launches on the Telos EVM

The first automated market maker (AMM) has launched on the Telos EVM! Elk Finance aims to be the leading forex market for our decentralized economy. Learn more at Elk Finance’s website.

Earlier in September, Telos announced a collaboration with Hive! Telos and Hive are both fast, scalable, and near-feeless blockchains with strong governance principles. Our shared principles and focus on Web 3.0 set this partnership up for success. We’re excited to see where it takes us! Stay tuned for more details, or read the announcement here.

Omni Consumer Protocols added auto-compounding support for TLOS liquidity pools to ensure that any rewards you receive are sold and reinvested into the pool to increase your stake.

As a reminder, always do your own research when utilizing DeFi rewards. Due diligence is a requirement for getting into DeFi or using the many tools that allow it to function !

TLOS is listed on BitMart

We’re excited to announce that TLOS has listed on the BitMart exchange! With over 5,000,000 customers served across 180+ supported countries, BitMart is a major milestone for increasing the accessibility and awareness of Telos. We’re excited to welcome members of their community into the Telos ecosystem !

Conclusion: All eyes are on the Telos EVM in November !

In case you’re in a rush, here are the top updates for October in the Telos ecosystem:

October was a huge month for the Telos ecosystem, and we know that November will be even bigger! We’re happy that you’re coming along for the ride with us.