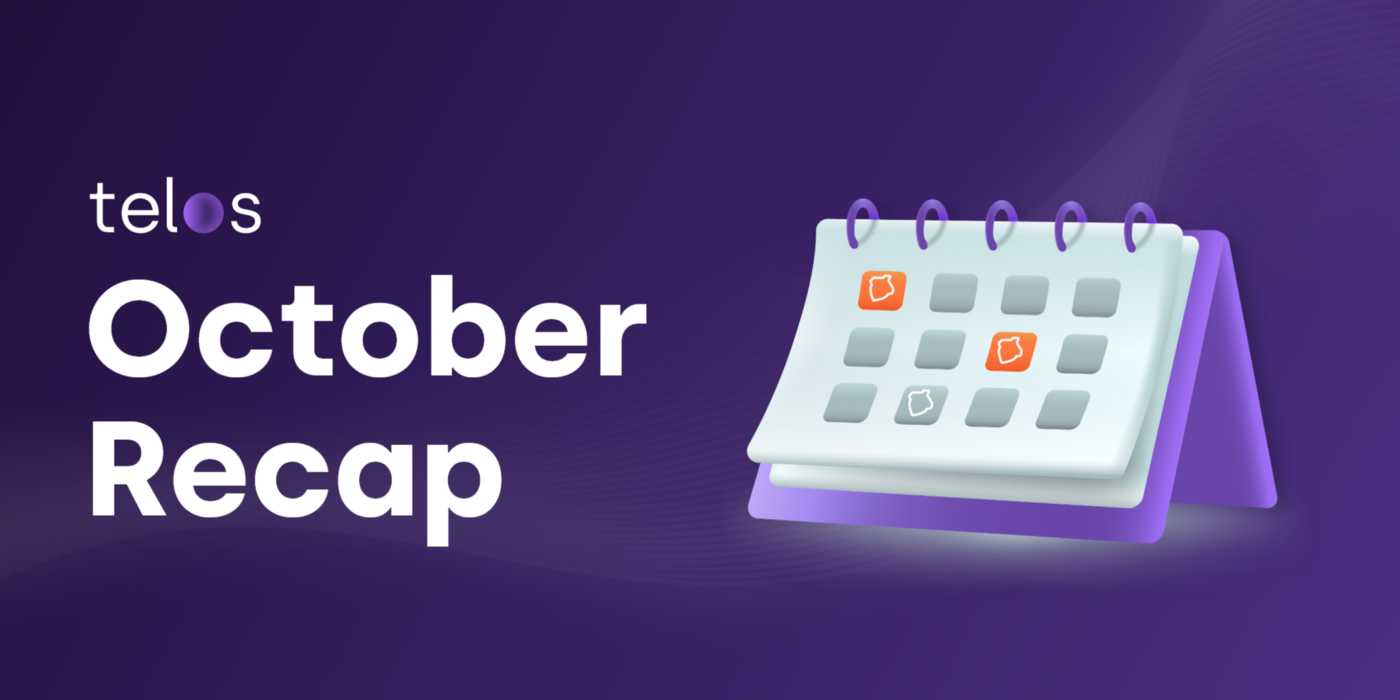 October was an eventful month for the Telos Foundation and the Telos community. Here are some highlights: We were pleased to see significant progress in the Telos Fuel initiative. The support of our community has been tremendous throughout this process, evident from a unanimous vote to pass the TEDP3 funding proposal and overall sentiment in our Telegram, Discord, and Twitter channels.

On the tech front, the TCD continues to make impressive strides in developing EVM 1.5 and the subsequent 2.0 Super Node. Additionally, the recent seamless integration of Telos Safe, a Gnosis Safe fork, offers our community a secure multi-sig wallet solution.

The Telos NFT team has also been busy at work, creating a new community hub to attract NFT fanatics, artists, and more.

We’re proud of what we’ve achieved in October and can’t wait to share more exciting announcements as we charge into the weeks ahead.

Telos Fuel has finally launched, and we were pleased to announce leading AMM ApeSwap as Telos’ first major partner. Over the following weeks and months, Telos will announce other Telos Fuel partnerships that will add immense value for our users and overall ecosystem.

We also secured funding from TEDP3 for Telos Fuel, and next month, we will release a complete summary of how the funds are deployed — stay tuned!

October was a month full of firsts for Telos. Most notably, we announced our first major Telos Fuel partnership with Apeswap.

Apeswap integrated Telos products on their platform, enabling users to leverage opportunities for yield farming and treasury bills. In addition, we have been working closely with Apeswap to coordinate a marketing strategy for our respective communities, including graphic and motion graphic content, articles, retargeting ads, AMAs and engagement contests to bring awareness of these exciting DeFi opportunities on Apeswap. We still have a lot in store for this campaign next month so stay tuned!

The Telos Fuel website is live, and we are eager to have dApp developers and potential DeFi partners apply. We’re focused on spreading the word that Telos is making big moves in the DeFi space. We want YOU to be a part of it, whether you represent a DeFi protocol that can partner with Telos or an end user that can enjoy the continuous influx of Telos DeFi protocols.

October also included a collaboration with the NFT team to deliver a successful Halloween art contest with Joyn.xyz. The contest welcomed over 150 entries. We’re currently displaying the winners’ works as we head into Halloween (check out our Twitter banner every day for a surprise!).

From now until the end of Q4, you’ll see us continue collaborating with influencers, specifically on YouTube, to create video content surrounding major updates and partnerships. As always, we will keep everyone in the Telos Community informed of the exciting announcements and campaigns coming in the next two months.

October has been a wild ride for the NFT department, and there are no signs of letting up. We began the month by swinging our community over to the new NFT Community Hub Discord, which brings us more in line with industry standards and allows us to accelerate and kick-start artist acquisition through our various initiatives. You can join our Discord group here: https://discord.gg/Pdhbcp5c

Contests created the backbone of our month by engaging with platforms like Joyn, Airlyft and Twitter to showcase how powerful Telos NFTs can be and how easy the tools at hand are to use. The Department also handed out its first Telos ignite Grant to Andrea Reade to commission works for a future auction. Finally, we just wrapped a Halloween banner contest that saw over 150 entrants and ample “new blood” for the community overall.

With Telos Fuel off to the races, Business Development was thrilled to welcome the following entities to our DeFi Ecosystem:

We have implemented “product” champions for defined work packages that now own and drive the backlogs and developments with their “tribes.” We are excited about the progress and impact of the organizational changes and resources added.

With the launch of sTLOS liquid staking and Telos Safe on our EVM, we continue to deliver the required infrastructure to support the TEDP3 and FUEL initiatives for our DeFi ecosystem.

We are continuing to iterate on Telos Native upgrade to Leap 3.1 — The mainnet launch was postponed to ensure a seamless migration. Updates will follow as we are confident that a smooth transition is guaranteed. Detailed information about the release is available here: https://github.com/eosnetworkfoundation/mandel-contracts/releases

EVM 1.5 — Required some additional tweaks, and as we see dependencies to Leap 3.1, the expected go-live was moved to early November. EVM 1.5 has an entirely reworked block header structure, and our first test nodes are running smoothly. Our Teloscan Indexer — will be available at launch and deliver fantastic analytics and chain statistics once live.

EVM 2.0 continues to be one of our highest resource assignments. We are proceeding as planned and are working through the following Roadmap as expected.

We are also continuing with further improvements on Teloscan, Open Block Explorer, and App.Telos.net. More detailed release notes are under preparation.