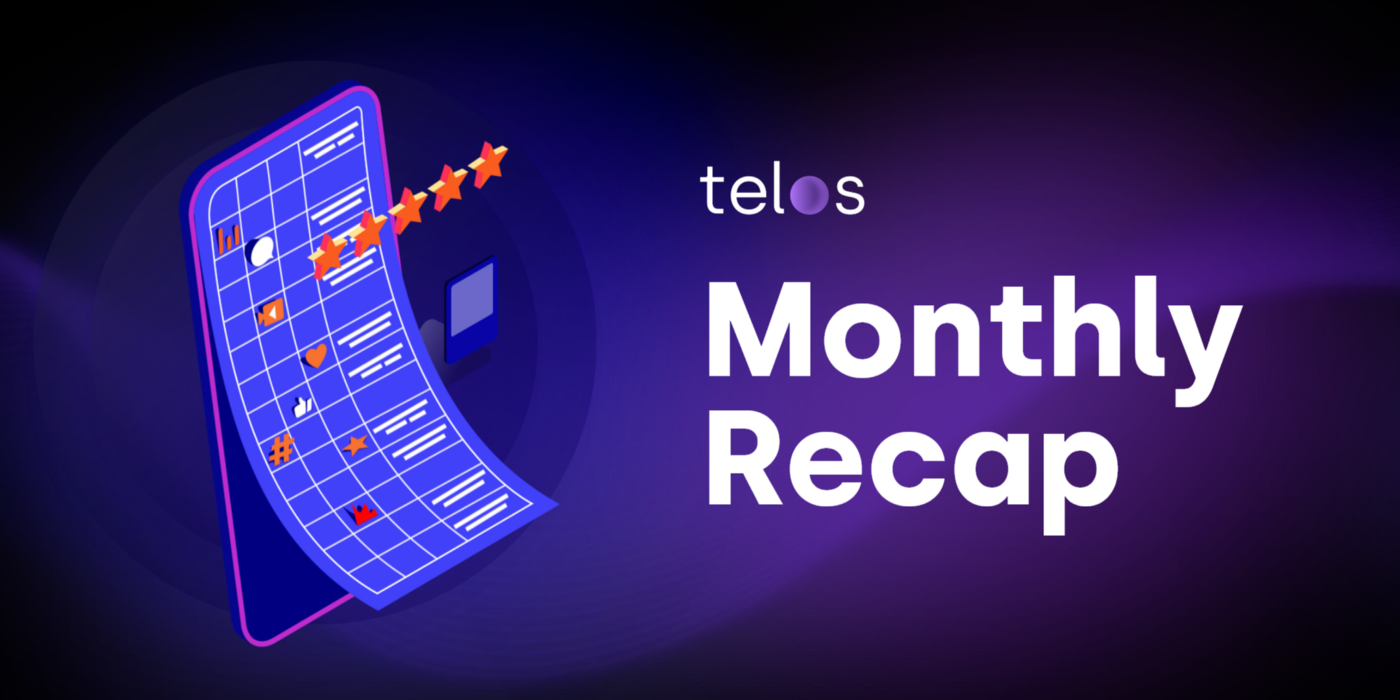 A Message From The CEO

Suffice to say; May has been an eventful month. Critical macro events of 2022, such as broadening price pressures from the Russia-Ukraine war, interest rate hikes to tame inflation, and of course, the implosion of Luna and UST, caused ripple effects throughout all of crypto — of which Telos was not immune.

Yet, these black swan events notwithstanding, we remained vigilant in building a more optimal DeFi ecosystem and stayed true to being responsible and smart with our tokenomics. Our community has always found the right balance between innovation and pragmatism. We will continue to double down longevity first, taking the lessons learned from the failures of projects like Luna to make Telos even stronger. We understand it may be frustrating to many that, for now, our market movement is tied somewhat to larger projects. This is uniform among altcoins and the almighty Bitcoin for those new to crypto. However, we are confident that this binding price action will ultimately fizzle as time passes. We expect the market to become more sophisticated of our offering and take notice of the key differences that make TLOS a safer prospect than most networks — and currencies — in this space.

Now that we have addressed the elephant in the room, let’s focus on our story — the TF, TCD, and liquidity team continued to deliver on all fronts. The Foundation unveiled Mission NFT and has already seen dozens of new NFT projects launch on Telos. Meanwhile, the liquidity team revealed a major tier-1 exchange in Huobi and a lively DEX in ApeSwap; and the TCD gave us a peek into liquid staking and EVM 2.0 — a feature that will significantly benefit the overall Telos ecosystem and its investors.

It’s easy to get excited about Telos when you block out the noise and focus on what we’ve accomplished this past month. Despite all the negative news headlines, we haven’t slowed down a tick, and in fact, we locked in our tunnel vision and took it upon ourselves to ramp things up considerably throughout May. And if all of this wasn’t enough, we’re less than a week away from Decentral and Consensus in Austin! June is going to be a big one!

Like most of the crypto community throughout May, the Exchanged and Liquidity team has been dealing with the aftermath of the drama involving LUNA and Terra. As market conditions grew seemingly worse by the day, we sprung into action, working with our partners to secure sufficient liquidity across all the trading venues. Unfortunately, this also led to a decrease in our non-TLOS token reserves, and we are actively monitoring and taking necessary steps to ensure long-term sustained operations.

However, despite the foray of market drawdowns, we were able to form exciting new partnerships. This includes a tier-1 exchange listing on Huobi, a strategic partnership and subsequent listing on ApeSwap (with farming and staking rewards for TLOS holders), and a Simplex partnership and listing. The latter enables easier purchase and selling of TLOS with FIAT for users worldwide.

During May, the Community Relations team made great strides in connecting with our community and elevating the overall user experience. This includes soon-to-be-implemented updates to our Discord that ensure all community members have the opportunity to share their thoughts with the team and improve our influencer relations which ultimately will help spread the word about all the incredible developments happening at Telos.

We have also laid the groundwork for several growth campaigns in June. These expectations are that these campaigns will result in more users joining our community and actively engaging with Telos. We have also planned to implement a gamified bounty program that will hit full stride throughout June.

Marketing Team: Working Through the Turmoil

While the crypto market entered its freefall — primarily due to the Terra/Luna debacle — marketing was hard at work preparing for the prosperous future of Telos. We’re proud to announce that our May marketing campaigns saw our Twitter followers hover around 91K followers and our impressions increased by an astounding 1.13M impressions. We’re on pace to grow past the 100K follower mark and set expectations high to achieve this milestone through organic growth soon.

May was also an important month for NFTs on Telos as these digital assets appeared to take center stage with newly added collections and contests to our ecosystem. Mission NFT kicked off in early May and garnered almost 50 participants out of the gate and a few dozen projects — 12 are verified. Astronaut Scott Kelly also minted a historic NFT collection on Telos of photographs taken during his final trip to outer space. These unique works of art come with a personalized audio description recorded by Mr. Kelly. The pieces will be auctioned off, going to the Global Empowerment Mission to provide aid to Ukraine.

During May, we were hard at work planning for successful upcoming events in Austin, Texas — Consensus and Dcentral. At Consensus, we will run our own Telos World event with partner sessions on DeFi, NFTs, Music NFTs, ESG, Africa, Gaming, and Social, at which almost 30 Telos partners will present. The plan is to run two-afternoon sessions on Telos technology, with Jesse Schulman and his team to present our tEVM to guests attending.

Furthermore, some of our block producers will provide their insights in a fireside chat. And we will work with Kluest, winner of the EVM hackathon, to create Telos World, a unique AR experience exclusively for Consensus attendees.

Once the dust has settled from our Texas trip and the crypto market’s turmoil, we will be banging the Telos drum again on the unique benefits of our EVM, low-cost NFT projects, and some ‘fuel’ for DeFi on Telos. Lots to look forward to!

It is often an ideal moment to reflect on your progress, goals, and efficiency during extreme market instability. By doing so, we have realized that one of the goals we intend to achieve is to increase the collaboration of our core teams while driving our major initiatives forward. George Vernon has now taken over Program Management for our major initiatives: EVM Ecosystem growth, NFT Ecosystem Growth, DEFI Ecosystem growth, and becoming a leader in ESG. The TF will measure the success of these initiatives in extended quarterly sprints and validate each initiative’s priority with each passing quarter. This ensures that all teams follow the same goals and work cohesively to support a singular approach.

In addition, the TCD & TF have onboarded a few remaining critical roles to help ensure success across departments. As a result, we are confident that Telos has all of the pieces in place to begin to progress at a newly invigorated pace.

We hope you’re excited about everything we have in store for you this Summer! May was bountiful in terms of projects that Telos welcomed to its ecosystem, despite the less than pleasant market conditions. We know that the best time to build is when others choose to rest on their laurels, so we stared the markets in their beet-red eyes and said, “It’s Telos Time!”. Ready to stop and smell the May flowers? Say hello to the latest projects to join Telos:

We’re kicking off June in full force at Consensus and hope to see you there! Do you have a project or idea that will reshape the DeFi landscape? Join us.

Telos Core Development (TCD) continued to hire additional resources in May and has reached the targeted headcount by the end of the month. In addition, we are adding a full-time Product Management resource in early June which will start to focus on Telos native user experience and applications.

Douglas and Erika attended the World Economic Forum in Switzerland. The number of contacts and opportunities made is fascinating and clearly shows that we are moving in the right direction.