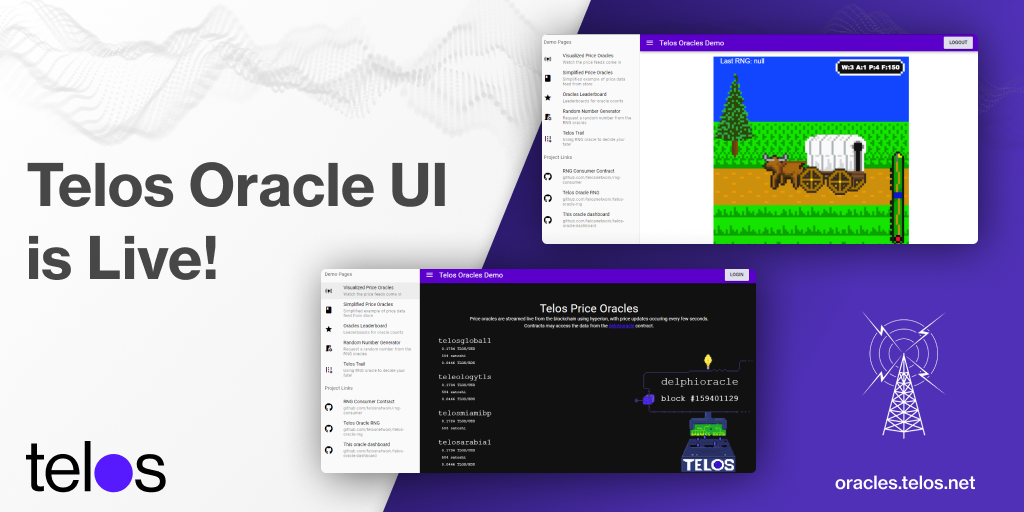 An awesome new user interface (UI) was just launched for the Telos Oracles ! Learn more about what this means below or jump to the bottom of this article for the summary, then check it out.

The Telos Core Dev team recently launched two powerful oracles that are going to become an integral part of the Telos ecosystem. The price oracle and random number generator are two of the most important oracles for developer use cases. Many blockchains rely on a tool from a third-party developer or another network to fill these needs. However, Telos offers both these tools for anyone to take advantage of at lightning speeds. Although the technology for these oracles have been around for a little while, the team just released an epic UI which community members can start using to experience them at work, even if they have zero technical knowledge. Check it out at oracles.telos.net.

The first of the two oracles released is a price oracle, which tracks the value of several cryptocurrencies from outside sources and brings that information on chain. This tool is integral to DeFi applications and will be an appealing addition for any potential partners in that sector.

Popular price oracles have presented issues when utilized on major blockchains like Ethereum due to high gas fees. On top of the fees, results can get slowed down with congestion and are unable to provide accurate data in real time. Telos solves this problem thanks to its low fees and quick transaction times.

This tool produces a truly random number, within a set of predetermined variables, that’s verifiable on the blockchain. When a number is generated, multiple transactions take place in the background at the high speeds that only Telos can provide. This tool has plenty of real-world use cases in popular types of applications including DeFi, lottery/gambling apps, games, NFT randomization, card collecting and much more.

The newest addition to this aspect of Telos has been four awesome interfaces that users can use to experience the oracles at work. The first of these is the Visualized Price Oracle, which displays real-time data as price updates are pulled from the blockchain every few seconds. The awesome visual and UI was created by Ted L. of Heart Farms. The second UI is a simpler version of the price oracle, with more in-depth data on what information is being gathered. The first of the Random Number Generator (RNG) interfaces is a simple tool that can be used to receive a random number at any time. Give it a go and consider some of the real-world use cases like a coin toss or a Dungeons and Dragons Polydice. The final UI is a simple but fun Oregon Trail style game where you can use the Telos RNG to decide your fate on the Telos Trail, also created by Ted L. While you’re having fun, think about all the money you’d pay in gas fees if you were playing this game on another network! In addition to these four new user interfaces there is also an oracle leader board which tracks the oracles that have contributed the most data. This is used to incentivize other validators to join the oracle network and provide accurate data in hopes of greater recognition from the community voting for them.

Several other networks have tried to come up with oracle solutions, but many of them fall short of what Telos is able to accomplish for several reasons. High gas fees on other networks, only to retrieve a useful metric, deters low budget projects from using them. However, Telos’ oracles can offer the same information at virtually no cost, making them extremely accessible. Another problem with competitor oracles is speed. As networks become congested due to low transaction speeds, oracles can slow down immensely which affects their useability. Thanks to Telos’ high speeds of 10,000 transactions per second (TPS), Telos oracles are among the most efficient on the market. Finally, decentralization is an important asset for oracles that are going to be interacting with other decentralized applications. Other oracles attempting to solve the previously mentioned problems usually do so in a centralized manner, with one node. This isn’t the case with Telos oracles, which utilizes several validators to verify this information.

If your project could benefit from the Telos oracles or any of the other tools that Telos has to offer, we want to hear from you! We’re constantly looking for new developers, partners, investors and everyone else in between to get involved with the Telos ecosystem. If this sounds like you, drop us a line here!