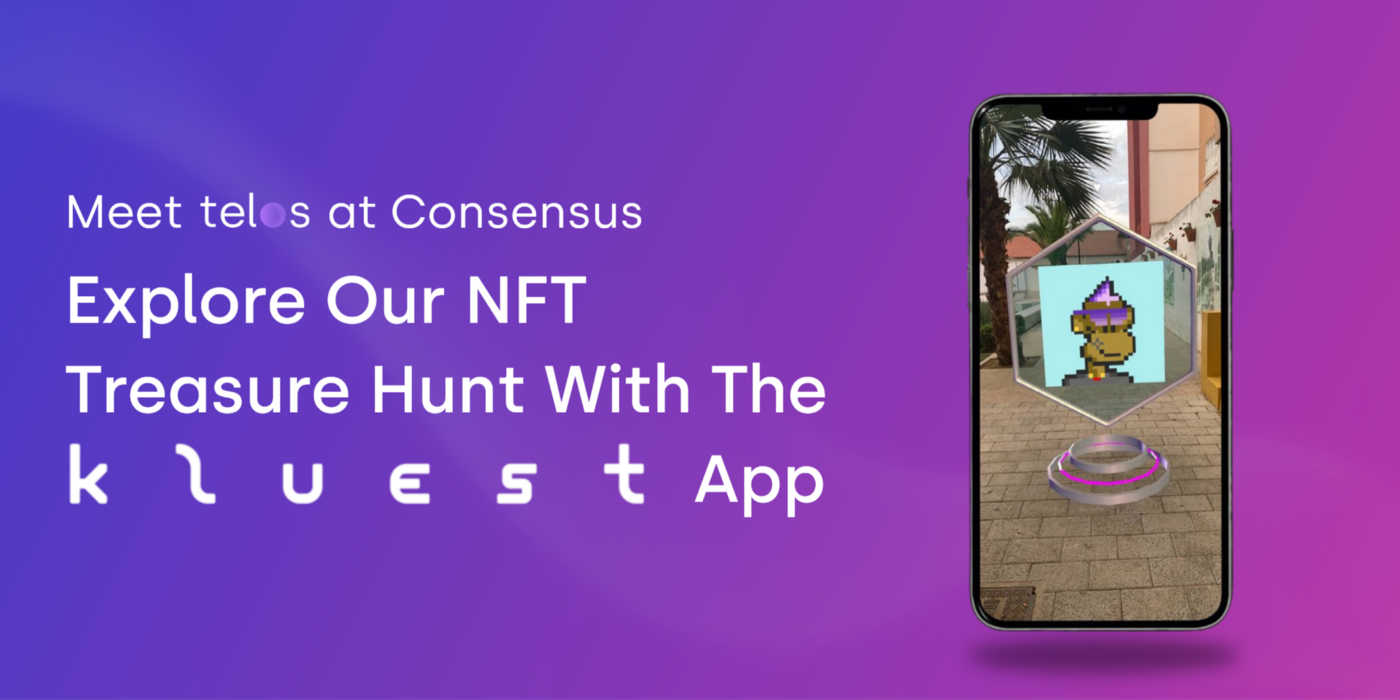 The DeFi conference we’ve all been waiting for is finally here, Consensus 2022 in Austin, Texas! Telos will be present at this monumental event, and we’re giving attendees the chance to gamify their experience with an NFT treasure hunt with rewards that include stunning NFTs and a TLOS prize pool!

We’ve partnered with the winners of the Telos EVM Hackathon, Kluest, to host the Telos NFT Treasure Hunt at #Consensus2022. The fun begins at the Telos booth, where seven NFTs will be placed on and around the exhibition floor. Participants will need first to download the Kluest app and enter their augmented reality metaverse, so they can spot these digital assets that will be casually hanging around waiting to be captured! You can download the app for iPhone or Android through this link, or by scanning the following QR code:

The hunt will take place on the exhibition floor of the Austin Convention Center, starting at the Telos Booth (#438) on opening day at 9 am on Friday, June 10th, and ending at noon on Saturday, June 11th. We ask that all treasure hunters provide contact details, including their name, email, and wallet address.

Rules of the Hunt

Participants will be notified that the Telos NFT Treasure Hunt is active when entering the Austin Convention Center. The challenge will be to collect all seven NFTs, and once completed, treasure hunters must redeem a secret code back at the Telos booth. Remember to keep your eyes peeled above and below using the Kluest app, as these NFTs could be anywhere in the convention room, including hanging from the ceilings or tucked away behind another booth.

Of course, no treasure hunt is complete without a bounty for the winners, so we’ll be announcing the Telos NFT Treasure Hunt winners at 12:45 pm CST on day two of Telos World, located on the first floor of the Austin Convention Center in Meeting Room 2.

Our first prize winner will receive 5,000 TLOS and all seven NFTs captured in the hunt. Runners-up who have successfully completed the challenge will receive an NFT from one of the Telos collections and 10 TLOS. All prizes will be automatically deposited into the wallets of treasure hunters.

Put on Your AR Hunting Caps

We look forward to seeing you all at Consensus 2022 and wish all participants in the Telos-Kluest NFT treasure hunt the best of luck!