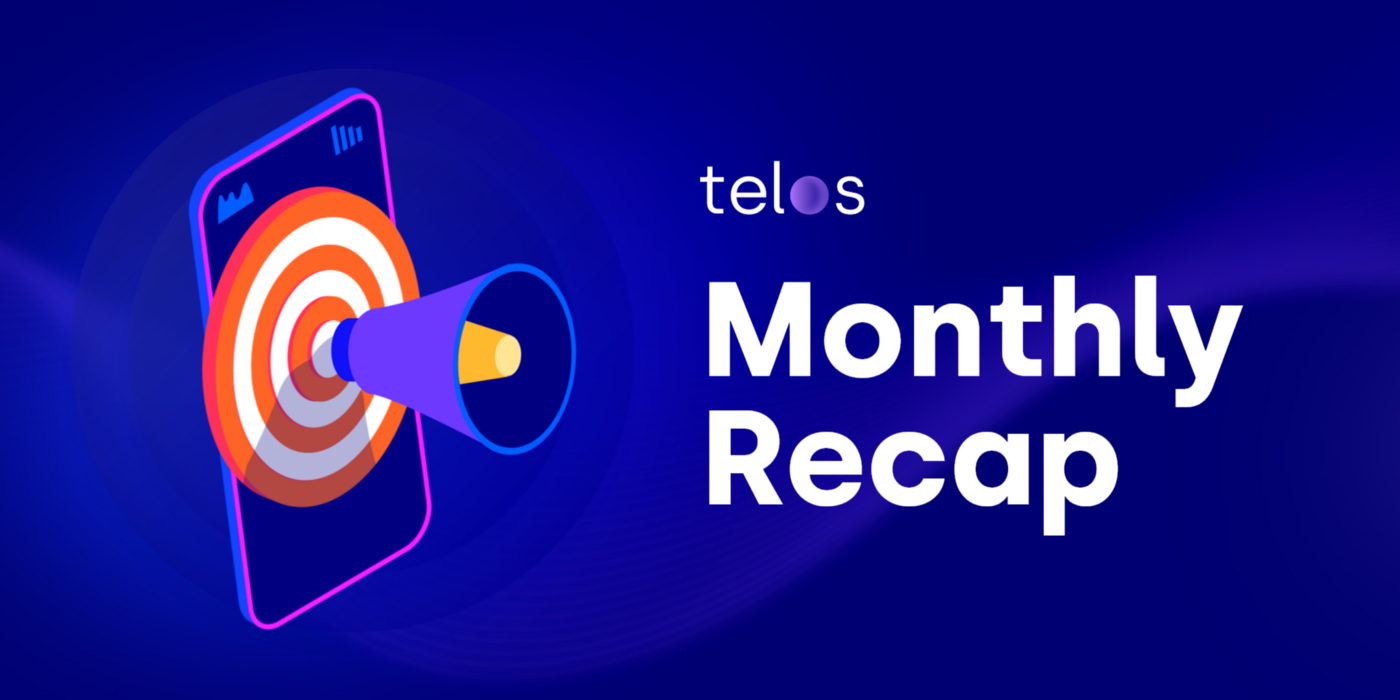 The dust has seemingly settled from the market depression caused by the onslaught of lending and exchange platform insolvencies and other top-tier protocols crashing altogether. This turmoil starting to subside is excellent news for Telos as we have a backlog of exciting developments we are ready to release. If it seems like we have been quiet, that is certainly not the case — we have been putting several initiatives together that we are now ready to start releasing over the coming months.

As for August, we have made immense progress. Regarding tech upgrades, sTLOS beta testing is underway, and we’re thrilled with the progress we’re making! We were also proud to release Antelope.io. For those who don’t know, Antelope is the new name for our core code base. Antelope is ready to empower developers globally with a high-performance, open framework for Web3. We are proud to be one of the leaders pushing the framework forward and excited that the new brand is finally out there in the wild. The Antelope Leap 3.1 upgrade release validators will be upgrading over the upcoming weeks.

We are confident that the hard work we’ve put in on all fronts will continue to establish Telos as a driving force for Web3 adoption. Stay tuned as we release information about operational improvements and economic adjustments requiring community voting approval. We cannot understate how excited we are about the coming month.

During August, the liquidity and exchanges team has been working on improving the internal team structure, deal flow process, and the strategy moving forward for the Telos Liquidity incentive program. In addition, we have taken actions to rebalance our accounts, planned the roadmap for the rest of the year and have been working to close some deals with prominent DeFi and CeFi platforms. During September, we expect to share the news of these deals to the public — deals we have been working on for quite some time — and also roll out the incentive program.

We are also looking for more members to join our team. If you have a good understanding & experience of the DeFi and CeFi landscape, we would be interested in connecting to see if you would be a good fit. Please reach out to exchange@telosfoundation.io.

August kicked off with the much-anticipated Mission NFT winners. Initially, the competition reward pool was set to award 25,000 TLOS to the top five projects and one 50,000 TLOS prize to the ‘’Gooey Pick’’. However, due to the superb quality of the submissions, we thought it deserving of awarding 1,000 TLOS as a token of support and appreciation to the five runners-up. We look forward to seeing how the communities of our winners and the rest of the submissions develop and grow within the Telos NFT ecosystem in the coming months. You can read the Mission NFT winner’s article here.

We are approaching an exciting moment in the history of Telos. Telos Core Developers are poised to launch a list of products and upgrades over the next six months that greatly benefit our community and DeFi users beyond. The marketing team is working closely with TCD to develop new content, craft campaign frameworks, and fine-tune a new influencer strategy to ensure these releases receive the exposure it deserves. First on the list is ERC-4626 liquid staking solution,sTLOS. TLOS ERC-20 token holders can stake their tokens for an attractive APY (to be announced). Expect influencer content, community contests, podcasts and shareable creatives following its release.

Other upgrades, such as EVM 1.5 and the 2.0 supernode, are also on track, and marketing is ready to push out all announcements regarding this progress when they become available.

We also finalized our brand messaging architecture. We took a fresh look at our vision, mission, principles, and unique positioning Telos offers. This rebranding was timed perfectly with the formation of the Antelope Coalition — a new path forward for EOSIO-built networks UX, WAX, EOS, and of course, Telos. This revitalized clarity in our brand message will bring a new layer of focus to our marketing campaigns and will serve as the inspiration for building a completely revamped Telos website.

August was a month of significant progress for the TCD. This included further developments of our most anticipated Core and EVM items while simultaneously improving multiple apps.

Our team relaunched Telos Docs, our ultimate repository and initial touchpoint for new users and developers who wish to connect with and build on Telos. The site is now relaunched with fully revised, brand-new content and backend. Further amendments will follow, and the new documentation website is a giant leap from our previous documentation pages!

Here are some updates on key deliverables: