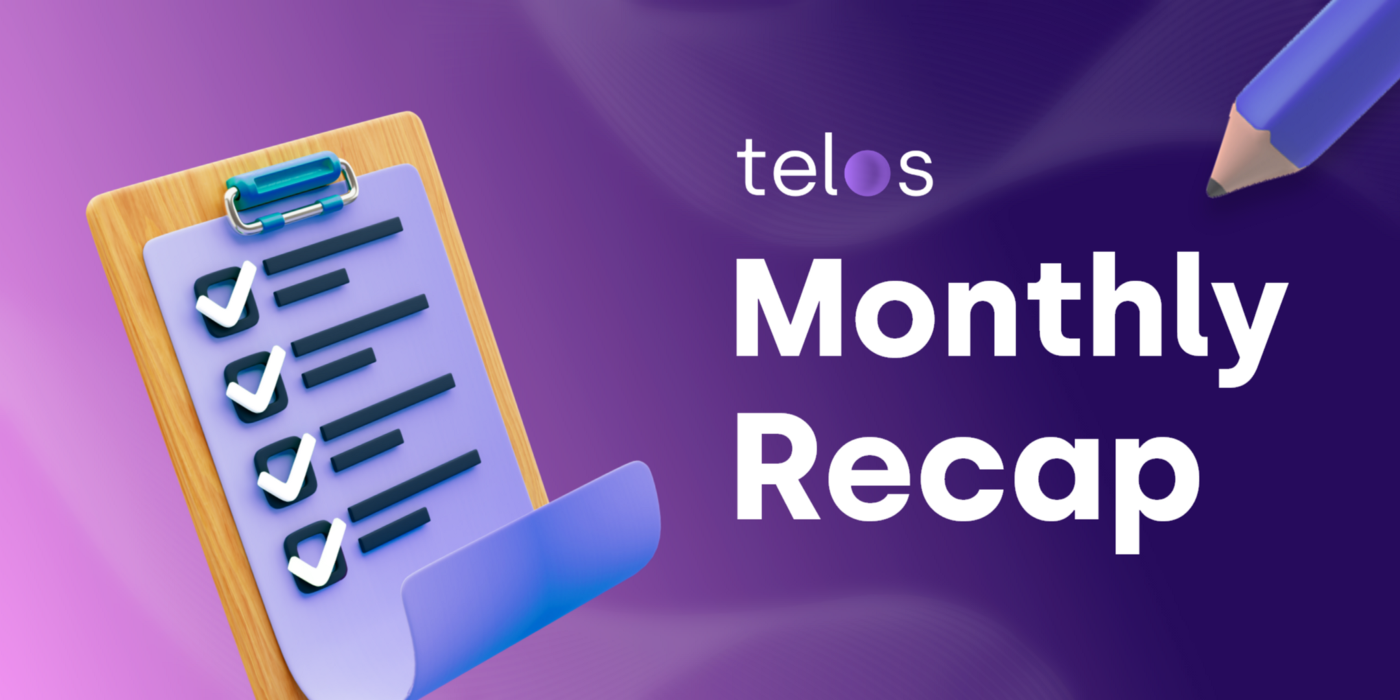 July was a reflective month for the Telos foundation as we mulled over our Q2 achievements in the quarterly report. Furthering the reflective nature of the month, we had the conclusion of the Mission NFT submission period and the commencement of community judging. The contest attracted over 90 NFT projects and 1,000+ community voters. With these two activities coming to a close, it was interesting to note just how much Telos has evolved in a quarter and how many developers and creators have made their way onto our network in that time. Beyond reflection and segueing us into next month, the community voted on and passed liquid staking, which opens up new opportunities for our ever-growing Telos EVM community.

On the development front, TCD made further impressive strides on the tEVM 1.5, unveiling several new upgrades that will ultimately serve to improve the overall user experience for EVM users. They also provided a glimpse of the next-generation tEVM 2.0 Super Node (currently in development) that promises unparalleled speed, scalability, and interoperability.

Q2 was full of challenges for the entire crypto industry. However, Telos rose above them and did what we best: persevere, build, and fortify our ecosystem. We are confident this momentum will propel us into the second half of 2022 and enable us to continue bringing Telos to the world.

During July, the liquidity and exchanges team has been following up on the leads generated at the Consensus conference and Binance 5th year celebrations in Paris. Furthermore, we have been actively monitoring the market conditions and trying to improve our liquidity while rebalancing accounts. In addition, we are also working on setting up the Liquidity Incentive Program and some deals with prominent DeFi platforms and Exchanges. More information on this will be announced in the following weeks.

The Telos Community teams have been working hard to drive engagement in multiple areas, specifically focusing on NFTs throughout July as Mission NFT draws to a close. Shifting into next month, there will be a balancing of efforts into all of the Telos ecosystem apps (DEFI, NFT & GameFI.) In addition, we have been working on creating a better onboarding and community engagement experience on both Reddit and Discord. As a result, users will notice a simpler layout in Discord and more engaging channels.

In addition, Telos is reviewing and helping strengthen the Regional Community efforts. For example, the Telos India team has been driving in-person informational meetups, and we are working to take this approach to additional regions.

Marketing ended Q2 with big plans for rebranding and broadening the exposure of dApps, past and present, built on the Telos blockchain.

Telos is known to be a Layer 1 blockchain from the beginning, and at its core, that will always be the backbone of Telos’ technology. However, we have taken a step back to ask ourselves simple questions that evoke profound answers. Who are we? What do we stand for? How does Telos establish leadership in the future of Web 3? We’ve been in the process of rediscovering our brand. A brand that speaks to our core audiences in a way that inspires them to be part of a greater vision — a brand that transcends function to more profound meaning and higher purpose. This clarity in our messaging will ignite creative and engaging campaigns to put Telos at the center of our audience’s minds. Telos has a lot to offer, and it’s time the world sees it in its most accurate form.

Our NFT competition, Mission NFT, is concluding this week. There have been 49 vetted projects with exciting concepts and utility that just completed a highly active public voting process. After the judging panel announces the five winners, we will waste no time focusing on Telos EVM as the forefront of our narrative. With revitalized brand positioning in the works, we’re excited to develop compelling narratives that stay true to Telos’ brand promise while communicating Telos EVM’s unique positioning with a razor-sharp edge. We’re excited to see our community and the rest of Web 3 respond to it.

Telos continues to onboard new projects that marketing will continue to highlight for the community. We are also spotlighting projects previously launched on our EVM and Native to provide the community with essential updates and progress. Additionally, we are working closely with the Telos Core Development team to produce new documentation that will give developers a better sense of the advantages they can leverage when building on the Telos network.

We remain focused on building a fair and innovative home for Web 3. There’s a lot in the marketing pipeline, and this bear market provides the time we need to launch with more vigor into the next bull run.

Over the last month, the Foundation has done a deep dive into the operations & team structure. Our goal is to constantly self-evaluate and strive to find areas where we can improve and be more efficient overall.

One area of need is DEFI, and we are actively working on which roles are needed to help support a small, growing DEFI ecosystem. We recognize the importance and value of having a dedicated team on the NFT side and are finalizing our selection of individuals for a Telos NFT team. Our community can expect this announcement and meet the team members soon.

July was another fantastic month of growth to close out Q2. BD welcomed new projects to the Telos ecosystem centered around DeFi and NFTs, with robust communities and innovative use-cases.

It’s all systems go as we head into the latter half of 2022 and we encourage all project developers who are ready to build a better future for DeFi to Join us.

The Telos Core Development team ended Q2 on a massive high note. We updated our roadmap after accomplishing an array of objectives and set the stage for an even more exciting second half of the year.

The tEVM 1.5 continues to take shape as we piece together new upgrades to ensure a more robust set of features and greatly improved UX. One development of note is the new indexer that enables additional improvements to Teloscan, which includes a token overview, holder lists, and performance. In addition, the current architecture of EVM 1.5 will also undergo changes such as enhanced UX for TLOS and wTLOS transfers and a revised block header architecture. Lastly, we will re-index our chain once deployed due to these significant changes.

Single-asset staking has also come a long way and is on the cusp of being introduced to our community. This allows tEVM users to stake sTLOS for attractive rewards while boosting the TVL on our industry-leading EVM. As a single-asset staking token, sTLOS mimics the REX-style token staking on Telos native that does not suffer impermanent loss (as seen in dual-asset staking pools) and therefore presents a far less financial risk for investors.

The advent of sTLOS and our EVM 1.5 developments will enable us to offer a native, non-custodial bridge feature very soon.

Subsequent iterations will include:

Looking forward, the development of the EVM 2.0 supernode is progressing as expected, and the TCD looks forward to offering the DeFi community an EVM with unsurpassed speed, throughput, and affordability.