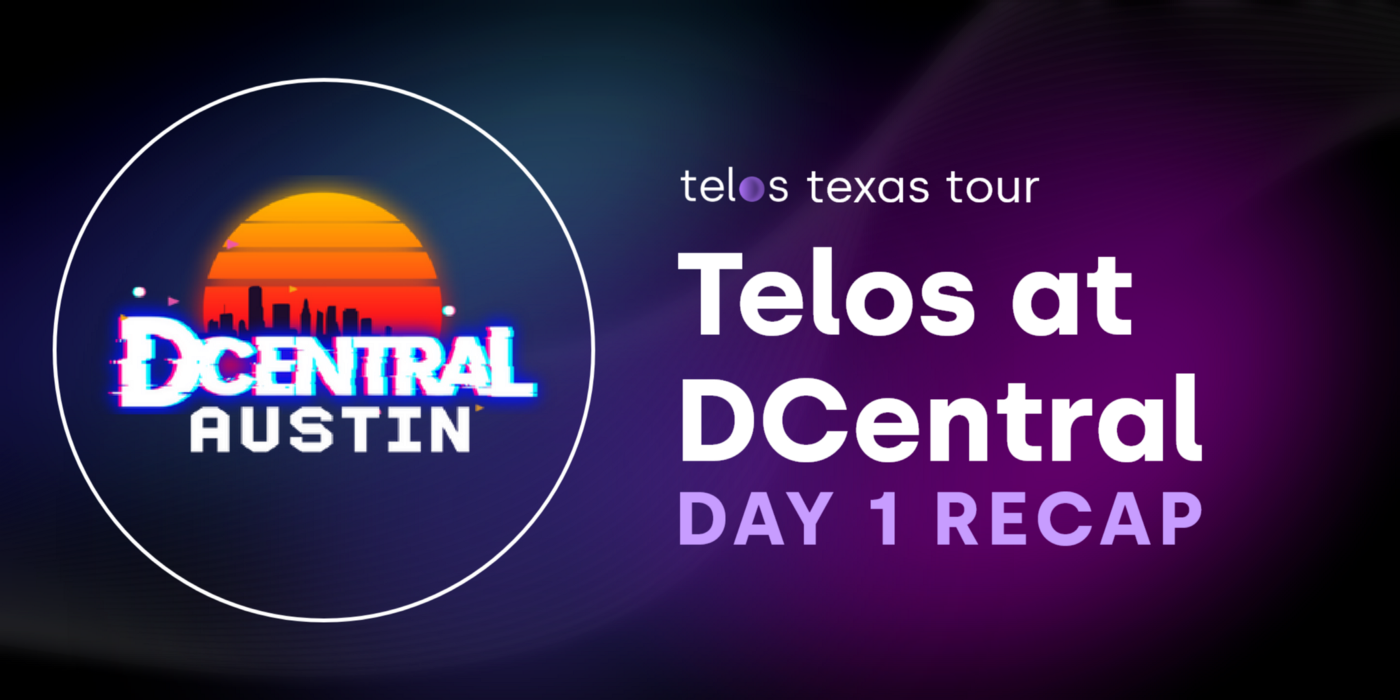 The first half of the Telos Foundation team has officially touched down in Austin, Texas! Yeehaw! The team is excited and eager to spend the next few days at one of the biggest and most talked-about Web 3 events of the year, Consensus!

As part of our Telos Texas Tour series, this article will provide an overview of what you can look forward to each day as Telos makes a name for itself at DCentral and Consensus! This series will point out all our favorite must-sees and inform you of the tech that has the Telos Foundation team excited.

Let’s start things off with our first day at DCentral!

Dcentral is the official kick-off event for Consensus that takes place from June 7th-8th! Dcentral offers a fantastic lineup of sponsors and speakers, Web 3 expos & NFT galleries, exclusive afterparties, and so much more. Telos is proud to be a Ruby sponsor of DCentral.

We are pumped up for the amazing Dcentral lineup of speakers! TF’s very own Jesse Schulman will be delivering a presentation on the Telos EVM, which you won’t want to miss. Jesse will share vital info as to why Telos is an optimal network for developers to build on and explore what it took to build the fastest and most cost-effective Ethereum virtual machine, the Telos EVM.

If you’re attending Dcentral, you can catch Jesse’s presentation on the main stage of the Dell Hall at 11:25 am CDT.

Also, rumor has it that The Big Gooey, the Telos Foundation’s NFT curator and a major supporter of the Telos NFT scene, will be roaming DCentral — so keep an eye out and don’t be shy to say hello if you spot him!

Here are some of the speakers that are high on our radar:

Do you have a suggestion for a speaker we shouldn’t miss? Drop us a link in the comments below, and we’ll do our best to check them out! Conferences like consensus allow us to connect with the brightest minds in the space, build together, and turn our vision of a DeFi ecosystem that is head and shoulders above the current model into a reality for all users.

Looking Ahead to Consensus.

DCentral opens the show for a very eventful week ahead, as it is followed by the main attraction, Consensus — and the Telos Foundation has a lot of exciting content, events, and experiences planned for attendees.

Consensus is a four-day conference that is jam-packed with crypto, blockchain, and Web 3 events! Throughout Consensus, Austin will see its fair share of digital art, expert speakers, new technologies and protocols, and much more. In addition, it’s an event in which Web 3 enthusiasts will gather to discuss and share ideas about the possibilities for the future, a future in which humanity leverages the power of the blockchain, crypto, the metaverse, and all other things DeFi-related.

At the moment, however, the Telos team is on the ground at DCentral, taking in all we can making important connections with other like-minded teams, and getting the word out there about what we’re building. If you happen to be in the area, stop by our booth and say hello!

Conclusion: Day One is Looking Bright!

WOW! We hit the ground running on day one of DCentral and this is only just the first stop on the Telos Texas Tour! We’re expecting the rest of the Telos Foundation team to touch down in Austin tomorrow, so it’s safe to say that the best is yet to come!

Once again, we encourage you to catch Jesse Schulman, TCD Lead Architect, and his speech entitled, Telos: Building the Fastest EVM, on day one of Dcentral! In it, he’ll delve into the power and speed of the Telos EVM.

We’ll report back soon with another update on the days ahead at Consensus! Until then, make sure you’re following us on all of our socials to stay in the loop about all of the wonderful things happening with Telos here in Austin.