Trading is Live on SushiSwap ! 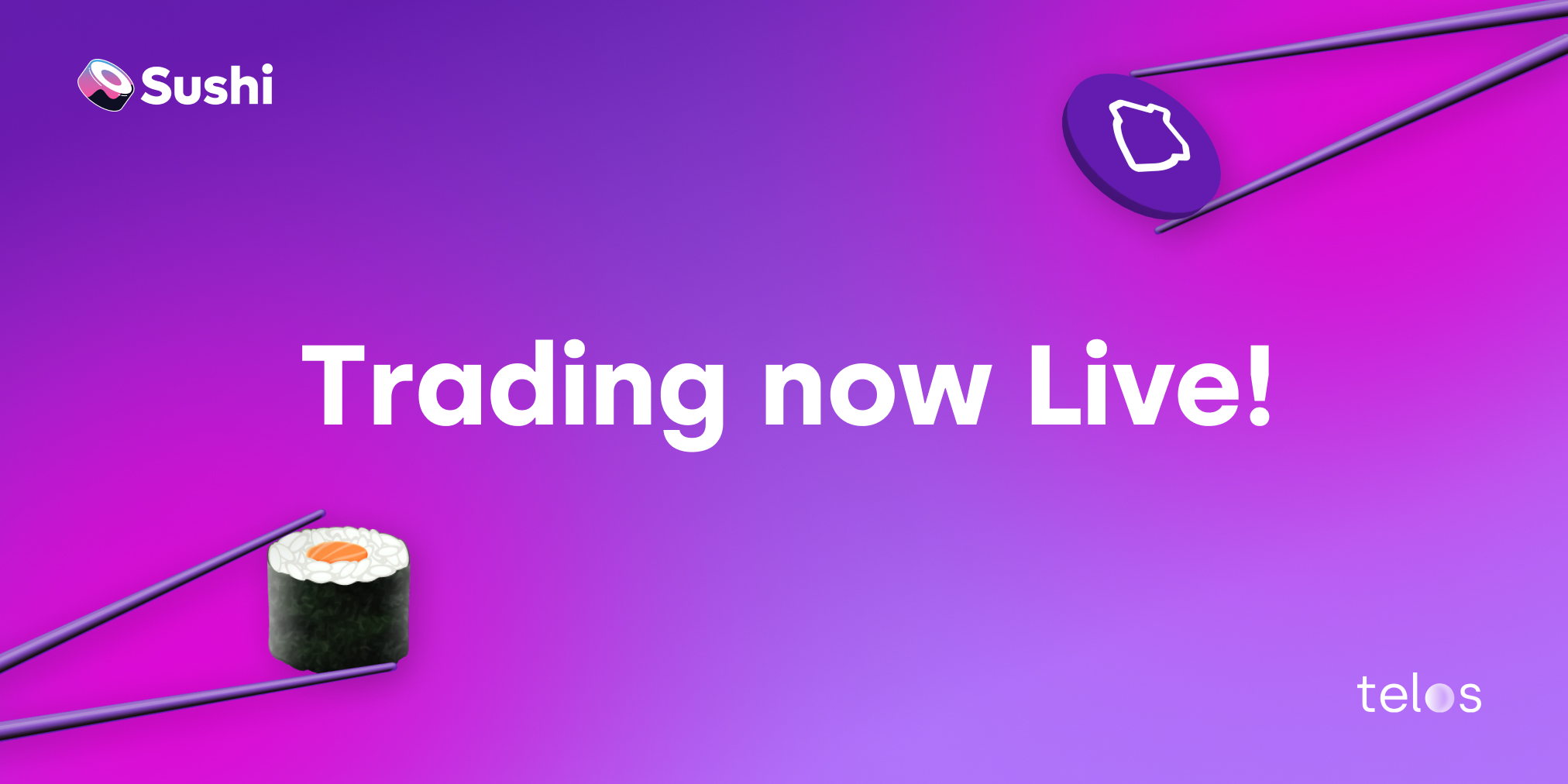 Sushiswap, the #1 multichain DeFi/AMM platform, has officially deployed on the fastest Ethereum L1 ever… the TelosEVM.

Sushiswap is LIVE on the Telos EVM and trading pools are open, allowing all users to take advantage of Telos EVM’s ludicrous speed, scalability, and no front running!

As a reminder, the following automated market maker (AMM) pools are being made available.

More will be added in the coming weeks as projects start to add their own pools and liquidity rewards come into play.

We’re also launching a SushiSwap trading contest. Win one of 30 prizes of 50 TLOS by trading on SushiSwap using the Telos EVM!

Every trade on SushiSwap using the lightning-fast Telos EVM gets you one entry to win. No forms, no submissions - you just need to trade or swap your TLOS from Nov. 23rd at 21:00 UTC until Nov. 29th at 14:00 UTC.

Winner list announced on November 29th - will you be one of our lucky winners?

No More Front Running on Sushiswap with the Telos EVM

On Ethereum and other networks, billions of dollars are stolen, often by validators, through the tactical reordering of DeFi transactions. This is called front running. But this practice is impossible on the Telos EVM, as prices are fixed and Telos’ strong governance prevents this practice from being possible. Eliminating transaction ordering means you always get the trade price you were expecting on SushiSwap.

We’ve prepared this video to help you understand how front running is one of the biggest heists in the crypto space. And then we’ll show you how the Telos EVM eliminates front running outright! This feature is a massive milestone not only for the Telos ecosystem but the entire blockchain space. It offers an effective solution for one of the biggest issues currently plaguing DeFi.

Looking for more benefits? The Telos EVM features the following benefits, which you can read more about in our previous SushiSwap announcement.

So, are you ready to dive into SushiSwap on the Telos EVM? We’ve linked to some guides here to make sure you put your best, most educated foot forward.

Get started now on Sushiswap on the Telos EVM

First, you’ll need to connect the Telos EVM to your Metamask. Follow this guide to complete this crucial step!

‍
Next, you’ll learn how to deposit TLOS to your TelosEVM account for trading and farming on SushiSwap. Check out this guide to learn more.

George Vernon, Operations and Project Management at the Telos Foundation, created some video tutorials to get you started. Watch them below!

Intro to Telos EVM Part 2: Funding your Metamask with Telos from an exchange pic.twitter.com/lG0uoRK3GW

Funding from a Telos native wallet

Step 3: Bridge or Route your assets from other networks with AnySwap

There are several options for you to bridge or route assets to and from the Telos EVM. It’s important to note that the majority of assets available for the Telos EVM are available inside the Anyswap Router as opposed to the Anyswap Bridge

What is the difference between Anyswap Router and Bridge?

The Anyswap Router is a new way to bridge assets across compatible networks that allows greater flexibility on which networks you can go between.  The service uses a pool of assets on each network enabling flexibility of choosing networks as well as accepting different brands of the same token such as pTokens TLOS on BSC and Ethereum.

The Anyswap Bridge: USDC, USDT on Ethereum only (these assets will be available in router soon!)
Anyswap Router:  ETH, BNB, MATIC, AVAX, FTM and even now pTokens TLOS! (available on all compatible networks)

Watch this guide to using AnySwap for more information.

Free Airdrops to those bridging/routing to TelosEVM using anyswap!

‍
In order to improve the user experience of DeFi users bridging to TelosEVM we are airdropping 0.5 TLOS when you bridge or route a non TLOS asset, such as ETH, FTM, MATIC, BNB, AVAX, USD, or USDC,  to the Telos EVM. This airdrop will let you start trading on Telos Sushiswap immediately. We recommend you pick up some more TLOS once you bridge over to pay for gas.

As this is an experimental feature, we have set up a Telegram support group for any cases where the airdrop does not deliver. Please join the designated Airdrop Telegram group so that we can manually process and take care of our new Telos users.

Alternatively, you can buy TLOS on a centralised exchange, as noted in Step 2, or buy from PancakeSwap and using the TLOS Anyswap router.

Step 4: Acquire TLOS and Trade on Sushiswap (on TelosEVM)

Interacting with dApps and DEXes like SushiSwap on the Telos EVM is the same as with other Ethereum-based networks like Ethereum or BSC. Simply go to the dApp, connect your wallet using Metamask (switched to TelosEVM), and sign the transactions as you normally would.

‍
You may be interested in farming on SushiSwap as well, which this guide will show you how to do. As a reminder, do your due diligence when using DeFi tools - this post does not serve as financial advice.

Built, tested and verified by developers for real-world mass adoption, Telos remains to be one of the most decentralized blockchain platforms today encompassing two leading protocol technologies in a single blockchain. Telos supports the blockchain ecosystem by serving as an incubator and accelerator for decentralized applications through community voted development grants. For more information, please visit telos.net.