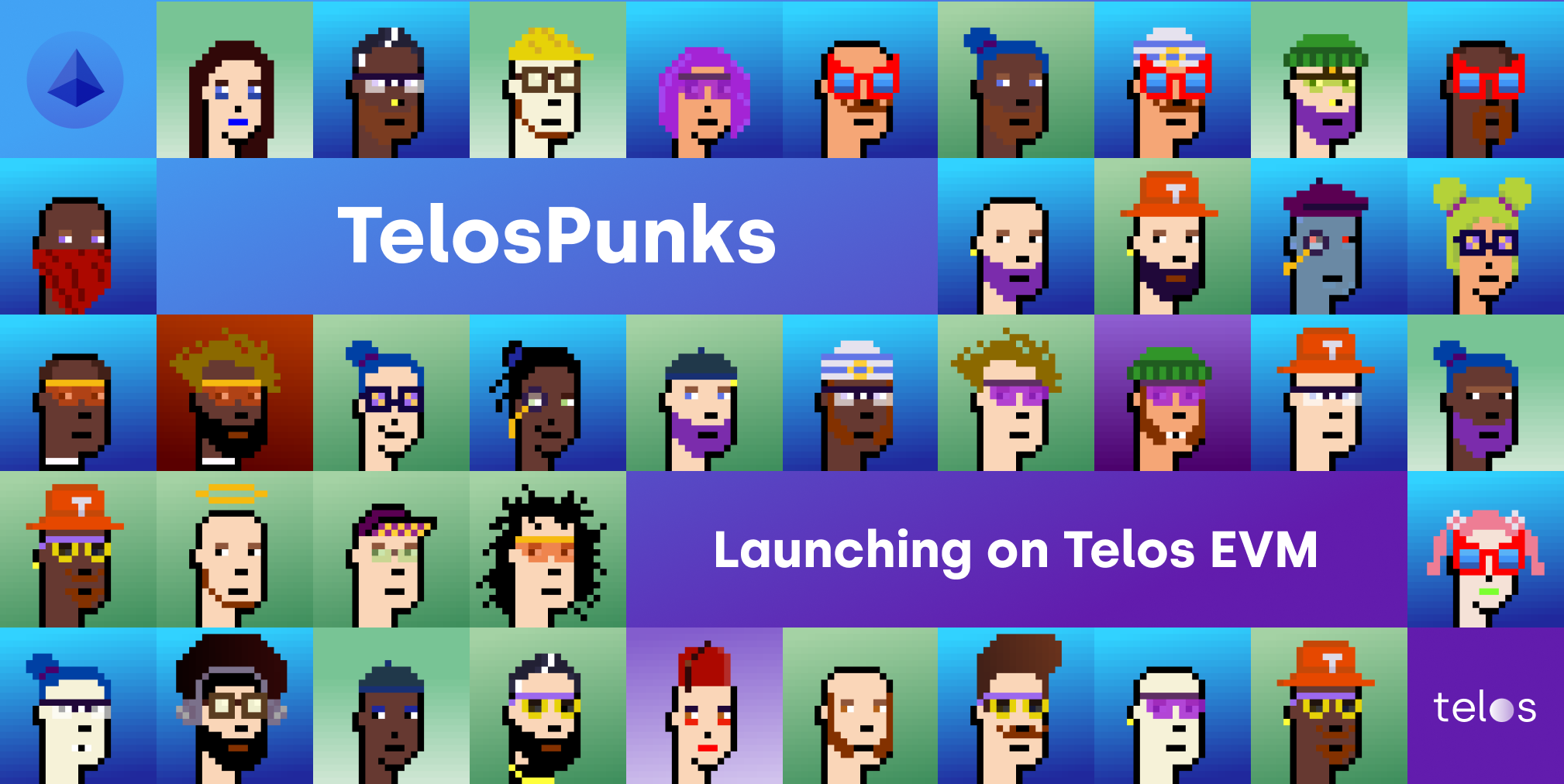 The first major project launching on the Telos EVM has been announced! We’re extremely excited to share it with our community. A Telos iteration of the industry famous CryptoPunks NFT project will be coming to the Telos EVM very soon!

NFTs are going to be a massive part of the Telos EVM. The power of the Telos EVM makes Ethereum based NFTs more accessible and powerful than ever before. So, it only makes sense to have a project of this caliber launching shortly after mainnet goes live.

What are the CryptoPunks?

The original CryptoPunks were launched on the Ethereum blockchain by Larva Labs in 2017 and are considered one of the earliest examples of an NFT, inspiring a movement that helped shape the modern CryptoArt movement (TelosPunks is not affiliated with Larva Labs). They are now one of the most sought after pieces of art in the space, with one recently fetching a price tag of over 500 Million USD.

Several iterations of this project have been launched on other EVM based networks and the response to these launches have been just as overwhelming. Now, with the Telos EVM officially launched, it’s time for the TelosPunks to make their debut!

The TelosPunks will feature 10,000 all new collectable characters created specially for the Telos EVM by the up and coming NFT artist The Big Gooey. To make things even more monumental for the Telos ecosystem, these will be the first ERC-721 NFT assets hosted on dStor!

A number of TelosPunks will initially be airdropped to random Telos EVM wallets that are eligible by meeting the requirements laid out in the next section. Additionally, several will be dropped to key contributors who have been instrumental in the launch of the Telos EVM.

Airdrops aren’t the only way people will be able to get their hands on a TelosPunk. The majority of them will be available to be minted (purchased) from the TelosPunks.com website, starting with #101. For this sale, each fifth punk will raise the cost by 1 TLOS: for example 101-105 will be 1 TLOS each, 106-110 will be 2 TLOS each, and so on... By the time all 10,000 TelosPunks have been sold, this will generate approximately 10 Million TLOS in revenue.

But that’s still not all! The TelosPunks are setting a new precedent with this project by putting 5% of revenue generated back into the Telos network. These royalties will be split between REX and the Telos Reserve Fund. This will help ensure the growth and sustainability of the Telos network for years to come.

Check out the TelosPunks website for more information and to look at all the artwork!

To include the Telos EVM community in the launch, 30 free TelosPunks will be airdropped to lucky members of the global NFT community.

Your ticket to win? Simply populate a MetaMask wallet that is not linked to your Telos account with at least 1 TLOS and you’ll be automatically entered to win.

Members of our Telos community who have already generated a tEVM address with the Web Wallet will need to generate a fresh Telos EVM wallet associated with MetaMask and populate it with TLOS in order to take part. This is to attract new Telos EVM users from the Ethereum community and other EVM based networks.

We want the whole crypto world to know about the power and speed of the Telos EVM. We can’t wait to see how the TelosPunks and the Telos EVM influence the broader NFT ecosystem!

You can follow the steps listed here to send TLOS to your MetaMask account from either the Telos Web Wallet or an exchange like KuCoin or Gate.

And that’s all you need to potentially win a free TelosPunk! Stay tuned for more details on the TelosPunks sale, and keep your eyes glued to social media for more excitement.