The Architecture Behind DeFi’s Most Scalable EVM 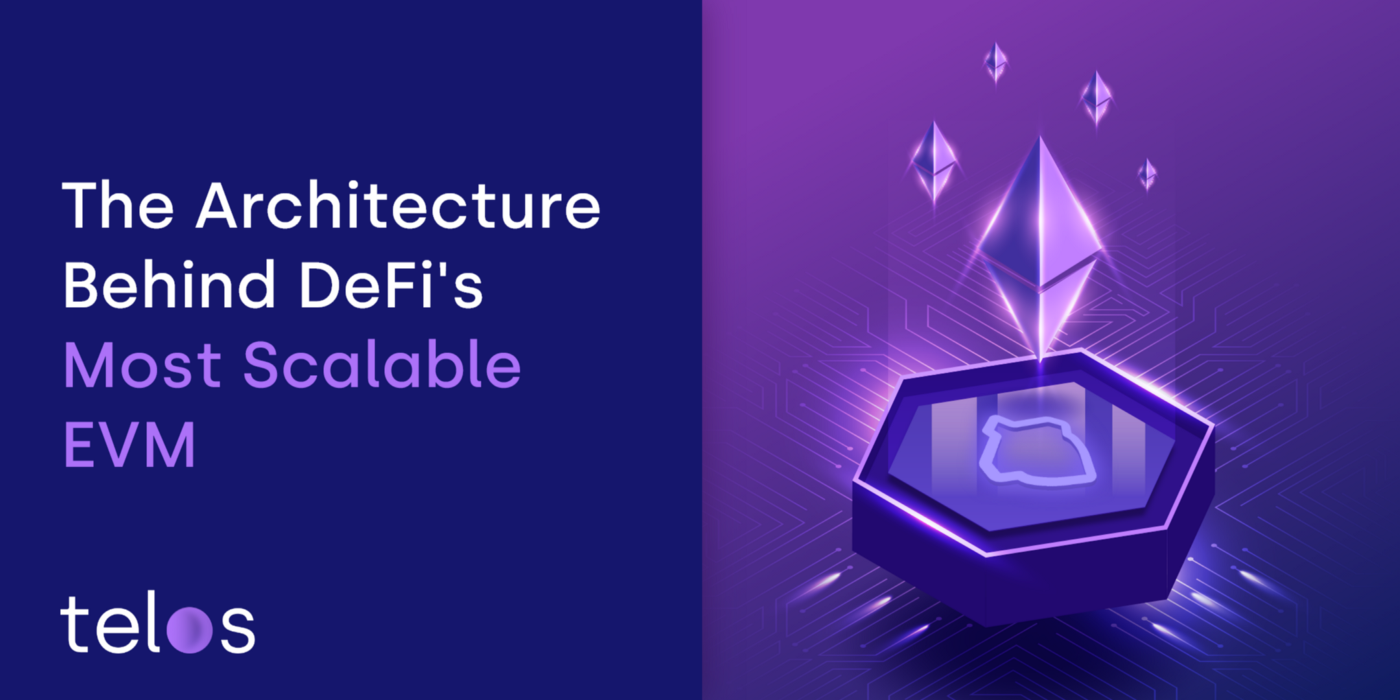 Telos EVM is a Smart Contract built on the native EOSIO layer with the following features:

● Composable: The Telos EVM processes the same byte code (compiled Solidity or Viper) as Ethereum’s EVM and other EVMs.

● Convenience Libraries: Telos is compatible with ethers.js & web3.js for interacting with nodes.

Telos is fast becoming the focus of attention for blockchain developers as the network continues to onboard dApps that leverage the speed and scalability of the Telos EVM — a state-of-the-art Ethereum Virtual Machine set to undergo critical upgrades in the coming weeks and months ahead.

Unlike other blockchain networks, the Telos EVM solution scales efficiently on our own native L1 Blockchain, and in a recent roadmap update, the Telos Core Development (TCD) team unveiled a slew of deliverables that aim to further separate the tEVM from the field. Telos network’s native and EVM chains are interoperable and already feature unsurpassed resiliency, having experienced zero downtime since going live. But as more developers make the switch to Telos, the TCD has taken the prevenient steps to accommodate the influx of dApps being built on the tEVM.

As a result, end-users also benefit from a network that is verifiably the fastest among all L1 blockchains, most affordable, and will soon provide attractive rewards incentives by way of an innovative liquid staking feature based on the ERC4626 contract proposal for tEVM users.

The Common Challenge Developers Face
Building decentralized applications can be a time-consuming and expensive process that includes data sharing across multiple chains, operating nodes, identifying and fixing bugs in failed transactions, and more. With so many variables to consider, developers need a network that offers unsurpassed compatibility and infrastructure, enabling them to easily build and deploy smart contracts and dApps at a reasonable cost.

Unlike other EVMs, the Telos EVM is not just a fork of the original Go-Ethereum code but rather an entirely new EVM built from the ground up. The Telos EVM (tEVM) optimizes the building process with a more reliable, scalable, and affordable architecture. The governance model of the underlying native Telos Blockchain also ensures that all validators operate within a confined set of rules and puts the balance of power in the hands of its users.

In typical EVM models like the one shown in the diagram above, dApps and user wallets connect to an Ethereum node that utilizes JSON-RPC to provide API services. This Ethereum node manages state and log databases for API users.

The state database stores the current network state and enables smart contracts to read and update the data. It is worth mentioning that state information is stored in RAM on Telos, allowing faster access and interactions. The logs database, which is not accessible to smart contacts, stores past Solidity events and is used for processes such as token transfers, centralized exchange integration and dApp transaction histories. Smart contracts cannot access logs.

Communication between dApps and the user wallet occurs over in-browser or WalletConnect protocols. Both entities access blockchain state and logs by communicating with the Ethereum JSON-RPC API.

Telos takes a practical approach in its EVM design to ensure developers versed in all programming tools can build on top of its network. For starters, Telos implements the EVM as a smart contract. Therefore, all activities that an EVM would typically run on an Ethereum node are run by a smart contract on Telos at 0.5 seconds block time. An Ethereum compatibility JSON-RPC server provides the API Ethereum applications are expecting. It translates the native Telos state from the EVM smart contract to Ethereum’s desired format.

The tEVM is compatible with virtually any contract written in Solidity (version > 0.7.0 is recommended) and all the tools developers utilize on other EVMs. This includes Remix, Hardhat, Truffle, web3, ethers.js, and more. In addition, the distinctions between the Telos EVM and other EVMs such as Go-Ethereum drastically improve the overall user experience.

The tEVM features a fixed gas price (paid in TLOS rather than ETH) that evades front-running entirely — a feature that combats the billions of dollars in crypto revenue siphoned from users on other blockchains. Even if a user sets a higher price on Telos, the network will only charge the lower set price and process their transaction as per its status in the queue. Further, 0.5-second block times remove the need to increase gas, and this high-speed block time prevents the ability of bots to scan the mempool for lucrative trades. If a user attempts to set a lower gas price, the network will reject the transaction with no fee charged to the user.

Telos benchmarked over 10,000 transactions per second (TPS) on a testnet using a fraction of the energy other blockchain networks utilize. Essentially, a transaction will be executed on the Telos EVM in less time than it takes for MetaMask to refresh the client. Most importantly, however, Telos achieves unrivalled speed and throughput without sacrificing the integrity of the network or creating an unfair system where whales and institutional investors can leverage their capital over retail investors/users.
More benchmark testing is underway and results will be shared with the community in a future article.

Telos can be best described as a robust, flexible, and ever-evolving L1 blockchain that adapts to the growing demands of DeFi. Its current infrastructure and support present an opportunity for web3 developers to build on a network that solves many of the pain points experienced on other L1 chains. In addition, the Telos Core Development and Developer Relations team works closely with all onboarded projects. Together, Telos provides external teams with cutting-edge solutions that ensure their building experience on Telos is seamless and enables developers to deploy their dApps in the most effective and cost-efficient manner possible.

We encourage all blockchain developers ready to build a faster, more affordable, and eco-friendly future for DeFi users to contact the Telos Developer Relations representative through the links below.