The Ethereum Merge Is Coming 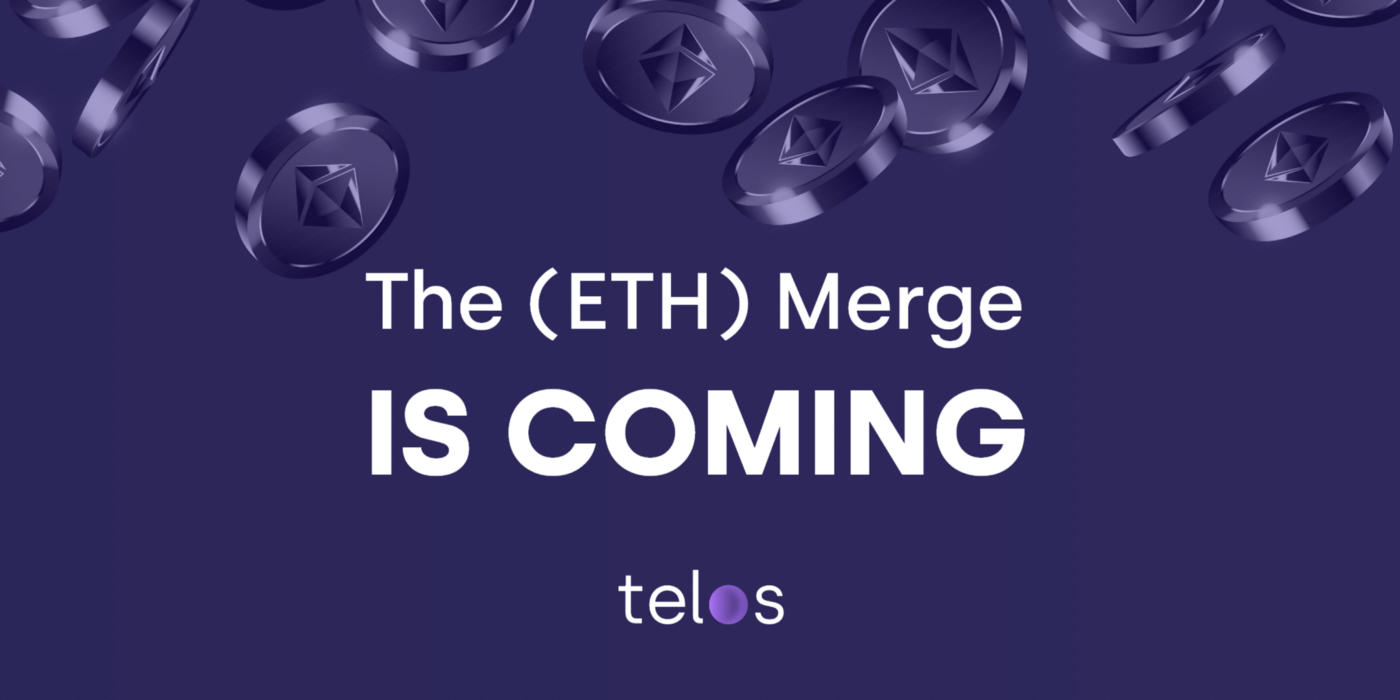 For over two years, talk of a new and improved Ethereum blockchain circulated in DeFi circles and beyond, offering promises of hope for users hampered by Eth’s exorbitant fees and lagging network throughput. The moment is finally upon us, as the biggest crypto news event of 2022 (in a year full of jaw-dropping events) is set to occur sometime around September 15, 2022.

The transition to Ethereum 2.0, known as the “Merge,” has made headlines across DeFi and mainstream media outlets in the weeks and days leading up to it. In this article, we’ll break down what will take place, how it will impact Ethereum users, and whether this redesigned Ethereum model measures up to the technology of the Telos EVM (Spoiler Alert: It doesn’t).

What is the Merge?

The Ethereum Proof-of-Work blockchain launched on July 30, 2015, providing novel levels of utility through smart contracts built to power thousands of decentralized applications. Ethereum succeeded as a network that was secure, programmable, and decentralized. However, block production resulted from its proof-of-work mechanism, which required blockchain miners to use high-powered, energy-draining computers to solve complex algorithms.

How severe was Ethereum’s impact on electricity usage? It’s estimated that Ethereum consumes as much as 72 terawatt-hours a year, which is roughly equal to the carbon footprint of the entire country of Switzerland.

Crypto wasn’t slowing down, and unfortunately, Ethereum, in its original form, proved it wasn’t able to adapt to the evolving demands of the DeFi community. Furthermore, the emergence of other layer-1 solutions, such as Telos, provided users with a lightning-fast network that was super affordable and used minuscule amounts of energy to process millions of transactions each day. Thus, the road to 2.0 began, with significant changes set to be implemented, beginning with a switch from Ethereum’s Proof-of-Work model to a more environmentally friendly Proof-of-Stake model.

While the Merge will solve the issue of Ethereum’s high energy demands, it has also induced other expectations that, sadly, won’t be fulfilled. Here are some of the common questions and misconceptions DeFi users have and what they can expect post-Merge.

Will Ethereum Be Faster After The Merge?

Technically yes, but the difference will be negligible. If you expect Eth 2.0 to offer you Telos-like speed, you’ve gone to the wrong place. But don’t take our word for it; the Ethereum Foundation said so themselves. The same applies to the notion that gas fees will be reduced after the Merge.

Will gas fees be cheaper after the Merge?
Unfortunately, that also will not be the case. Not to fear, Telos will still offer near-free transaction fees.

Can ETH Stakers Withdraw Their Funds?

Eventually, yes. However, before that is possible, stakers will need to wait for an upgrade called “Shanghai” to come into effect. If you’re in a hurry, we’ve got more bad news for you; while an official date has not been set, the Shanghai upgrade won’t be ready for at least another 6 to 12 months.

Staking APR Will Increase To 200% Post-merge!

Um, no. It won’t. The 200% figure was floated around Reddit and Discord groups, but whoever came up with that number was off by a hefty margin. The estimated APR increase will be closer to 50%; however, that figure is not engraved in stone.

Will Ether’s Price Increase As A Result Of The Merge?

We usually don’t predict price action, especially in a bear market. Ethereum’s chart did show some positive activity in recent months as the Merge drew near; however, we urge caution as current market conditions make a return to ATHs improbable, at least in the short term.

Will The Merge Cause Ethereum To Crash?

While nothing is guaranteed, there is no reason to assume the network will shut down during the transition.

We’re pleased to see Ethereum following Telos’ lead in becoming an eco-friendlier network. Still, while the Merge addresses Ethereum’s energy consumption, it leaves plenty to be desired in areas that plague most users. On the other hand, the Telos Core Development team is building technology and protocols that will make our industry-leading network even faster and more scalable than it is presently, not to mention more profitable for our EVM users. You can learn more about these exciting new initiatives through the following link.