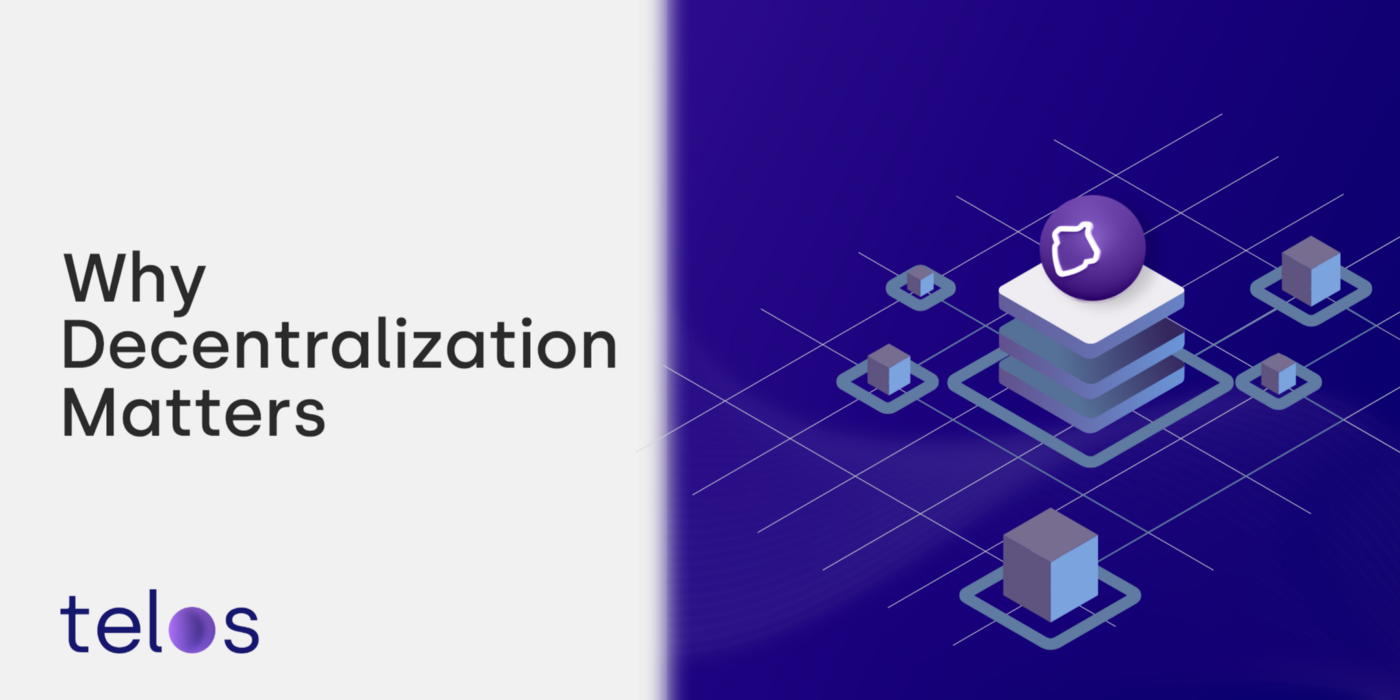 In the blockchain world, decentralization refers to a distributed network holding the balance of power in control and decision-making as opposed to a single authoritative or centralized entity. These select groups could mean an individual, small group, or organization. Decentralized networks aim to create an environment that enables participants to reduce the amount of trust placed in one another. This creates a level playing field that does not permit one or some members to exert more control over the rest — thus ensuring the integrity of the network is always maintained.

The key is to decentralize not only the management of resources in an application but access to these resources. This ensures the network or app will function more optimally and impartially.

How Decentralized is Your Network?

One should not assume that all blockchains are decentralized by default. A deep understanding of the governance model it’s built upon is important to understanding the level of decentralization within the network.

Let’s look at the recent developments with Solana and its DeFi lending platform Solend Protocol. With the market drawdown to levels unseen in years, Solend Protocol found itself in a precarious situation, as one whale’s $108m position edged closer to liquidation — putting other users’ assets at risk. After a failed attempt to contact the whale, Solend proposed a “solution” to rectify the problem by invoking “emergency powers” to take control of the whale’s account.

And though the backlash from users echoed throughout the DeFi community, earning tweets from popular influencer Cobie and Binance CEO CZ, the decision was held to a vote in which 97% voted in favor of the decision — or so it appeared. Upon further inspection, one user accounted for 90% of the vote — hardly resembling the true decentralization that attracted so many individuals to DeFi in the first place.

While SOL scrambles to resolve the situation described above, it highlights the need for more transparency and true decentralization of blockchain networks and the protocols built on them. It is a standard that defines the essence of blockchain and DeFi, and one that has been compromised in several prominent blockchain networks.

Telos is the only third-gen L1 that offers users and validators a completely decentralized blockchain. Telos’ validator network, which is equally sized and globally diversified, is a far more equitable alternative to networks such as Bitcoin or Ethereum, as the dominance of well-funded mining pools in the latter two networks has resulted in them becoming more centralized. The possibility of coalition among validators also threatens the decentralization of a network. For Bitcoin, it would take just five large mining pools to come together and four with Ethereum. In the case of Telos, it would take 22 mining pools to form a coalition.

On the governance side, Telos is hands down the most credibly neutral chain in existence. All validators are voted into active slots by the community. Bitcoin and Ethereum, in contrast, offer an unadvertised “pay to play” model that benefits those with more starting capital. Essentially, if you have the funds, you can buy your spot as a validator.

Telos’ tamper-proof voting system, Telos Decide, empowers TLOS token holders with a seat at the voting table. The governance model is built so that it is free from any human tampering. Any amendments to governance documents take place through a process that begins with a vote by TLOS holders and ends with smart contracts executing approved changes.

A Fair and Balanced Blockchain

The creation and commitment toward building a fully decentralized network maximizes the growth potential of the Telos ecosystem and those building on it. We encourage all DeFi users searching for a more transparent blockchain to explore the ways Telos empowers its community, embodying the true nature of blockchain technology.