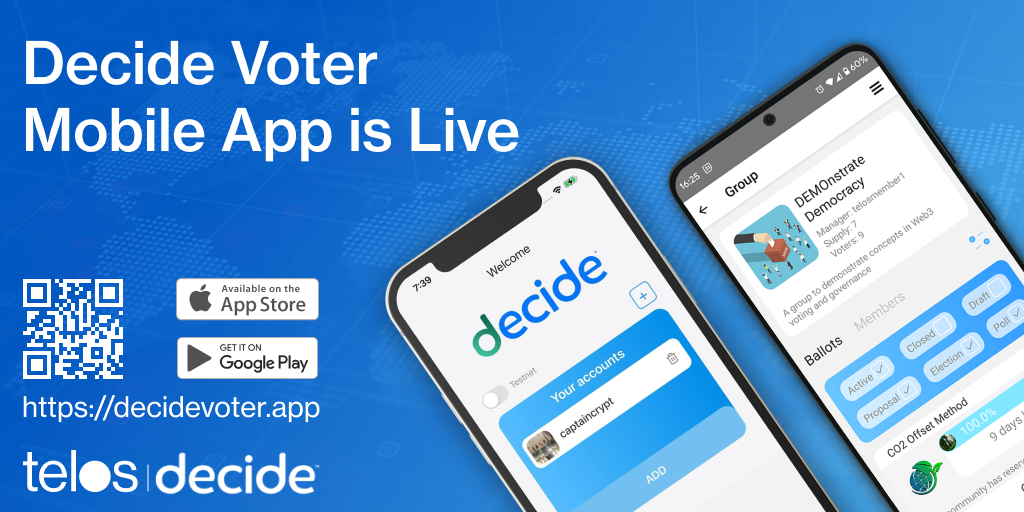 The much anticipated Decide Voter mobile app has just launched on the Apple Store and Google Play Store ! Learn more about how this app will revolutionize governance and make voting in the Telos ecosystem a super simple process. Or you can jump down to the bottom of the page for a summary.

The team at GoodBlock and TelosCrew have been working hard to make a decentralized voting and decision-making platform that is, above all else, transparent and efficient. Governance an important part of the Telos ecosystem, so  Decide Voter is bound to become an integral tool for network operations. Whether you’re voting for a Worker Proposal or voting for Block Producers, you’ll be using the powerful Decide Voter mobile app to get it done.

Decide Vote is a game changer because it is

What is Decide Voter and What are its Features?

Here’s the problem Decide Vote is trying to solve. Although voting is the backbone of our democracy, most of the world’s voting systems are antiquated and opaque. Because of this, trust in voting systems, both analog and digital, are at an all-time low.

Local governments, collectives, universities, and enterprises are all looking at ways to align with their communities in a transparent and efficient way.

The solution is Decide. Decide is an open-source solution originally created by GoodBlock for the Telos blockchain. Decide is an agnostic, modular mobile voting solution that allows for individuals, communities, organizations, and governments to organize in an efficient and transparent way.

This video gives a great overview of how Decide Voter makes voting simple.

What is Decide Voter and What are its Features?

Telos puts governance at the core of its identity. That core is based on our revolutionary open-source governance engine, Telos Decide, and it makes us stand out from other blockchains. We are the ESG blockchain, after all! But while Telos Decide may be powerful, it has lacked a solid user interface so far.

Enter Decide Voter. Now anyone, from the Telos network to third party projects, can use the powerful governance system that Telos Decide offers through their mobile phones.

You’ll use Decide Voter a ton in your day-to-day interactions with the Telos ecosystem. You might use it to vote for Block Producers, alter governance structures with Telos Amend, vote on Worker Proposals, or resolve conflicts with Telos Resolve. And you may start using it within any of the 100s of dApps that runs on Telos.

Not only does Decide Voter make it easy to vote on proposals, but it also introduces a user-friendly UI for submitting proposals. This is especially big for the Worker Proposal system, a platform where projects can receive public funding to grow the Telos ecosystem.

Being able to vote for Block Producers (BPs) is especially important for keeping the network secure and decentralized. Voter proxies will be removed soon, and it’s now up to individuals to vote for BPs on a regular basis.

Be sure to download the app to take part in our governance and make your voice, as well as your votes heard on these important topics! If you’re excited about the Decide Voter tool and the work that Goodblock and TelosCrew have put into this project, consider voting their BP nodes!

Watch our AMA with GoodBlock to Learn More!

Want to learn more from the GoodBlock Team? This past Telos Tuesday, we were joined by the GoodBlock and TelosCrew team for an in-depth AMA on Decide Voter! This was an awesome AMA with a ton of great information shared. Check out the replay below!

If your project could benefit from Telos Decide, Decide Voter, or any of the other tools that Telos has to offer, we want to hear from you! We’re constantly looking for new developers, partners, investors and everyone else in between to get involved with the Telos ecosystem. If this sounds like you, drop us a line here!