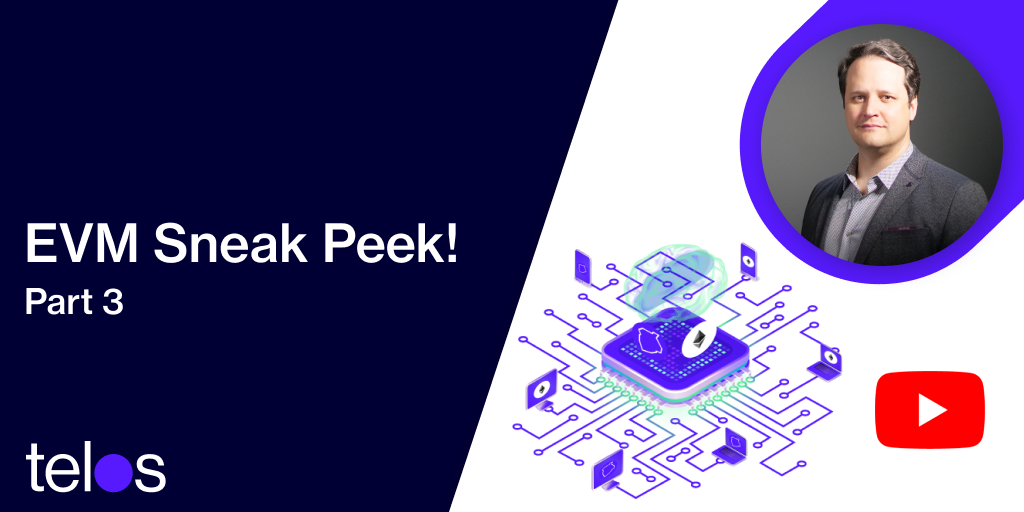 This is the 3rd and final part of our EVM Sneak Peek, featuring Douglas Horn from GoodBlock and Jesse Schulman, Project Technical Lead for the Telos Ethereum Virtual Machine. If you haven’t seen them yet, be sure to check out Part 1 & Part 2.

In Part 1 of this series, we looked at what the Telos EVM is, it’s biggest strengths and even got a demonstration of how MetaMask interacts with it. With Part 2, we got some backstory on the history of the Telos EVM and watched the newly built block explorer in action! The 3rd part of this series is equally insightful, as Jesse and Douglas go through the EVM roadmap, giving us further details on every milestone up until mainnet launch. Even more exciting is their demonstration of the first test app running on the Telos EVM and the cross-communication features between Telos Native and Telos EVM. Check out the video for all of this and more. If you don’t have time to watch the whole thing, stick around because we’ll be going over the major takeaways later in this article. https://www.youtube.com/watch?v=ZUaNiMy3Cn8

When can we use the Ethereum Virtual Machine?

One of the biggest questions that the Telos EVM team gets asked from the community is what sort of progress is being made and when will the EVM be running? What many people don’t realize is that the EVM is already up and running for anyone to test out and start developing with. However, this is only happening on the public testnet for now. Being on the testnet allows the EVM team and any other interested developers to continue refining and innovating the technology. Before launching on mainnet we want to make sure that all the necessary tools and framework are in place to make the Telos EVM just as reliable as any other EVM on the market. This is why Milestones 1 & 2 focus on working out the final bugs before the EVM’s mainnet launch. Everyone involved is making amazing progress in these areas, with Jesse and Douglas going more in depth on the technical aspects of these checkpoints within the video. We should also note that the video was shot some weeks back and since then, we’ve seen tons more progress in these areas! Check out our last EVM technical update to get an idea of just how close we are to mainnet launch.

Two noteworthy developments that were shown in this video was the creation of the testnet token faucet and the first EVM demo app.

The token faucet is available for use by developers or anyone who wants to experiment and experience the speed of Telos EVM transactions ahead of time. To try it out, head to https://app.telos.net/testnet/developers.

Simple Storage: A Simple App with Some Powerful Implications

The second tool demonstrated was an open-source application running on the EVM called Simple Storage. This is a very bare-bones tool without much functionality to it, but in relation to the EVM, it’s a monumental milestone. At its core, this demo app proves that the Telos EVM is operational and can seamlessly integrate with apps in the same way any other EVM should. It gives an example of an app that can connect to the EVM and has a user interface which can easily interact with MetaMask.

What’s even more impressive with the Simple Storage app is the ability to interact with it using a Telos native wallet, despite the application running on an Ethereum, Solidity contract. This is a somewhat unexpected milestone that opens a world of possible opportunities. Developers originally predicted that Telos EVM and Telos Native would be very siloed from each other. However, these finds lead one to believe that this won’t be the case in the future. We’re still understanding the full extent of the cross-communication capabilities. However, we expect that developers will have the ability to create apps which bring in existing Telos native accounts from the Telos network and allow them to interact with a Solidity app. All of this is a huge step forward, not only for Telos, but for the entire blockchain industry. It will only help to fuel the use cases for Telos as it becomes the first blockchain to support both dominating industry protocols (EOSIO and EVM Solidity). The work that the Telos EVM team has gone through to make this possible will be extremely hard for other blockchains to replicate, giving the Telos network a leg up in the industry.

The team has been giving careful attention to Milestones 1 and 2, in order to ensure that Telos EVM is not only the most powerful, but also the most reliable EVM on the market! Those interested in experimenting can already start playing around with some of these early features on the Telos EVM testnet. Along the way, we’ve encountered some groundbreaking innovations, most notably, the ability for Telos EVM and Telos Native to communicate with each other. This exciting news opens endless opportunities for innovations that aren’t yet possible on other major networks. Finally, as Milestone 1 & 2 come to a close, the first step of Milestone 3 will be the official launch of the Telos EVM on mainnet! We’ve still got some final pieces of the puzzle to put in place in order to ensure a reliable system for transferring valuable assets. However, we’re a lot closer to completion than many people may realize.

Be sure to follow us on all of our social channels to stay in the loop on the latest news and developments from within the Telos community.