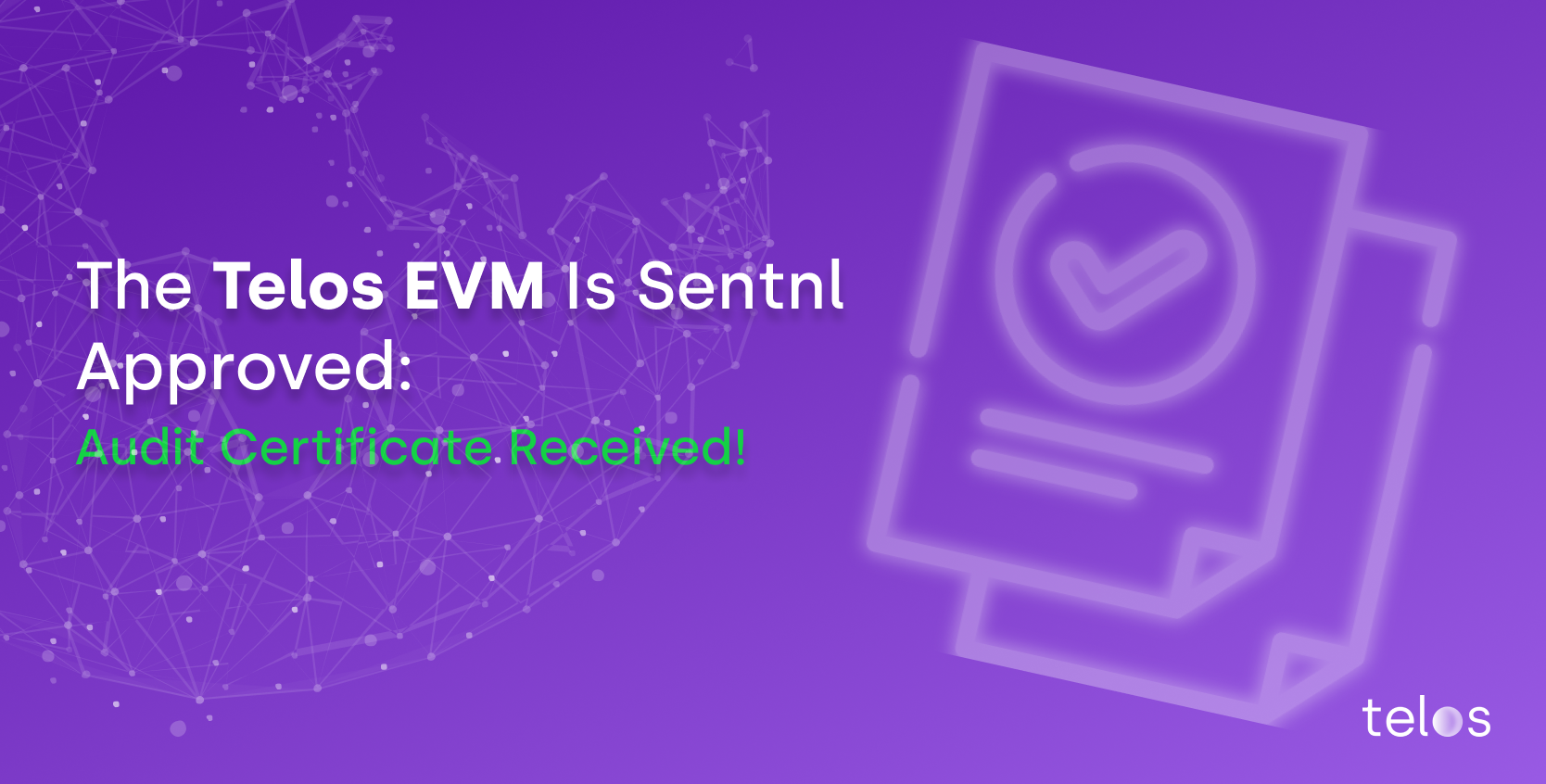 ‍
The Telos EVM is mere steps away! Our auditing agency just approved the code and the Telos Core Devs have updated the testnet code accordingly. Read on to learn about the purpose and importance of the audit and learn more about the launch process.

The Telos EVM has been built from the ground up to revolutionize the DeFi landscape and power Web 3.0. The Telos EVM outruns frontrunning, consumes way less energy, and brings more speed and power to boot!

Need a quick refresher? Our last Telos EVM article lists out the milestones until the mainnet goes live. Read it here, and then read on.

Want to catch up on all the latest EVM updates? Check out our EVM AMA from earlier in the month to get all the details.

The Telos EVM Audit is complete!

We’re proud to announce that the Telos EVM’s audit is officially complete! Our rockstar auditors Sentnl sent us their approval as well as a certificate. Remember that the Telos EVM launch process has been ongoing since the beginning of October. But this is the final milestone before the EVM mainnet goes live!

You can see the Telos EVM certificate for yourself below. As Sentnl notes, all discrepancies and security issues were resolved after working carefully with the Telos team. They signed off on the Telos EVM code as safe, secure, and ready for launch!

Additionally, you can follow this link and search ‘Telos’ to see the results of the audit on Sentnl’s website .

As they note, one operational issue is currently being resolved by the Telos Core Devs. You can follow along with their resolution on GitHub here.

Our audit ensures that the Telos EVM is secure and reliable – more than being the most powerful on the market. We chose Sentnl for their superior experience with industry leading EVMs and knowledge of Telos native technology. You can read more about Sentnl in our audit announcement here.

Here’s how the Telos EVM audit paid off.

The Telos EVM audit has taken the critical time it needed to revolutionize Ethereum Virtual Machines. But how has the time spent in the audit improved the Telos EVM?

Our auditing agency, Sentnl, showed their skill and expertise this August when they uncovered a vulnerability in the Go Ethereum code while auditing the Telos EVM.

This discovery created waves across the blockchain industry and generated notoriety for the Telos EVM team. Read more about what this meant for the industry here.

We are extremely grateful to Sentnl for their dedication to securing the Telos ecosystem and improving the broader blockchain space. We look forward to continued collaboration on future initiatives!

If you’re thankful for the work that Sentnl has done, you can give back by voting for them as a block producer. They have been up-and-running for a few days now and need all the visibility they can get.

What’s next for the Telos EVM?

The Telos Core Dev team have updated the Telos EVM testnet to the latest version in alignment with the audit. Going forward, our partners and developers can begin creating, building, and porting within the Telos EVM.

Beyond that, there are a few next steps before the mainnet launches.

This is an incredibly exciting moment for the Telos ecosystem – and we’re so glad that you’re here to experience this step with us! Be on the lookout for more community updates as we clear through the final few steps before the Telos EVM mainnet is live.