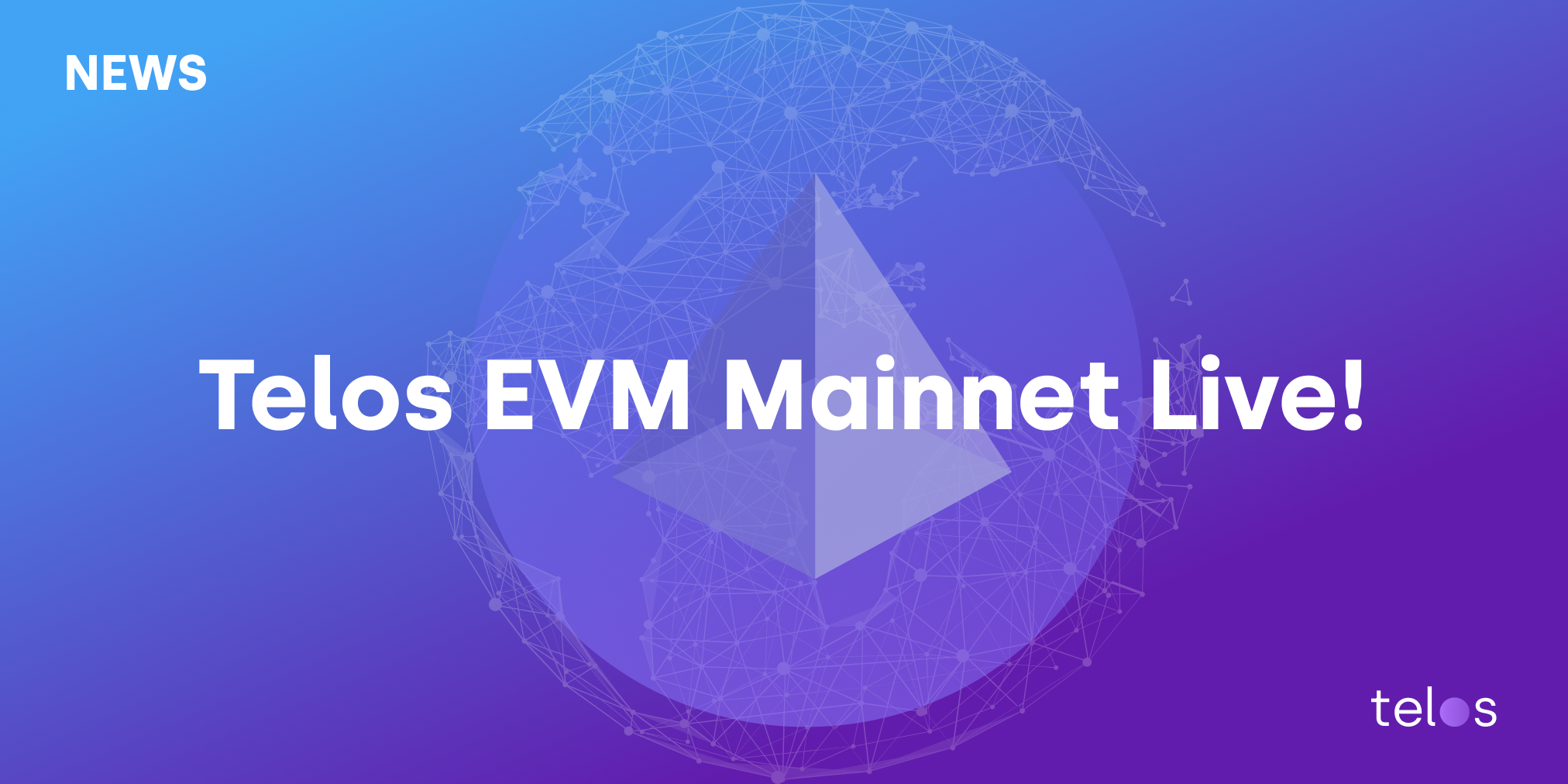 The Telos EVM is Live!

The wait is over – the Telos EVM is now officially live! This has been a colossal project more than a year in the making. We hope you’re as proud as we are to witness this historic moment for the Telos ecosystem. And we hope you’re celebrating in whatever way you see fit!

The Telos EVM is built to revolutionize the DeFi landscape and power Web 3.0. The Telos EVM outruns frontrunning, consumes way less energy than competitors, and is uniquely built for scalability ! And the Telos EVM is lightning fast - two new blocks are created every second.

The Telos Core Devs have hit major milestones this past month such as receiving audit approval from Sentnl, launching the EVM mainnet multisigs, and deploying the RPC servers, among others. We have big partnerships coming up on the horizon, as well as another huge milestone that just launched… The Telos Web Wallet 2.0 !

Read on to learn what’s new with the wallet, how it makes transferring your TLOS between Telos Native and the Telos EVM easy as can be, and more.

This new update improves both the style and functionality of the Telos Web Wallet.  You’ll first notice how the new coat of paint brings the Web Wallet in line with the updated Telos branding. These new purple and blue tones create a wonderful sense of cohesion and unity across Telos products.

Beyond the new colours, you’ll notice two shiny new buttons; these buttons give our community an intuitive method for users to move TLOS between Telos Native and the newly launched Telos EVM.

The Telos Web Wallet 2.0 is where you’ll go to manage your balance on both Telos Native and within the Telos EVM.

The TLOS to EVM TLOS cycle works like this: first you’ll ensure that you have TLOS in your account. Then, you’ll take your TLOS and deposit it into the Telos EVM.

All of this action and interoperability flows through the Telos Web Wallet! And version 2.0 makes this process clear, clean, and beautiful to look at. See it for yourself here.

First, you’ll want to either click the button to generate a Telos EVM address or make your first deposit into the Telos EVM.  You can also deposit your TLOS into the EVM right from an exchange - just send your new TLOS over to your tEVM address and you’ll be set.

Want to learn more about this process? Check out our new documentation to get all the details you’ll need.

We’re working on alternate deposit methods - stay tuned for those future pathways into the Telos EVM.

A Beginner’s Guide to Using the Telos Web Wallet

In that case, you’re looking for the Telos web wallet! It’s like an online banking page. Just follow along with us and we’ll show you how to use this accessible web portal.

First, head to the Telos Web Wallet. Once you click on the ‘Connect Wallet’ button, you’ll be prompted to click on one of several wallets. We’re going to click on ‘Anchor’ for now, which will display a QR code.

Notice that we’ve not been asked to provide our private key to login like we did when we set up Anchor. That’s because the web wallet will get all the information and permissions it needs from Anchor.

Think of it like using an ATM: you need to insert your bank card before you use it. But you don’t have to give the ATM the three pieces of ID you needed to set up your bank account.

If you have your phone handy, you can open the Anchor app and scan this QR code to give the web wallet access. Otherwise click on ‘Open Anchor App’ and click ‘Prove Identity’ in the bottom right corner of your Anchor window.

…And with that, you should see the brand new Telos web wallet!

Conclusion: Go Use the Web Wallet 2.0 on the Telos EVM!

The Telos EVM is live and usable, and a massive update to the Telos Web Wallet makes using the Telos EVM as easy as possible. We hope you’re as excited as we are to finally be able to click “Generate EVM Address” on the Web Wallet!

We’re preparing a huge month of exciting surprises, giveaways, and announcements to celebrate the monumental achievement of the completed Telos EVM for our founding community! Stay tuned for more news about future partners and dApps deploying on the Telos EVM. And make sure to follow us across our social platforms for all the latest news and updates.