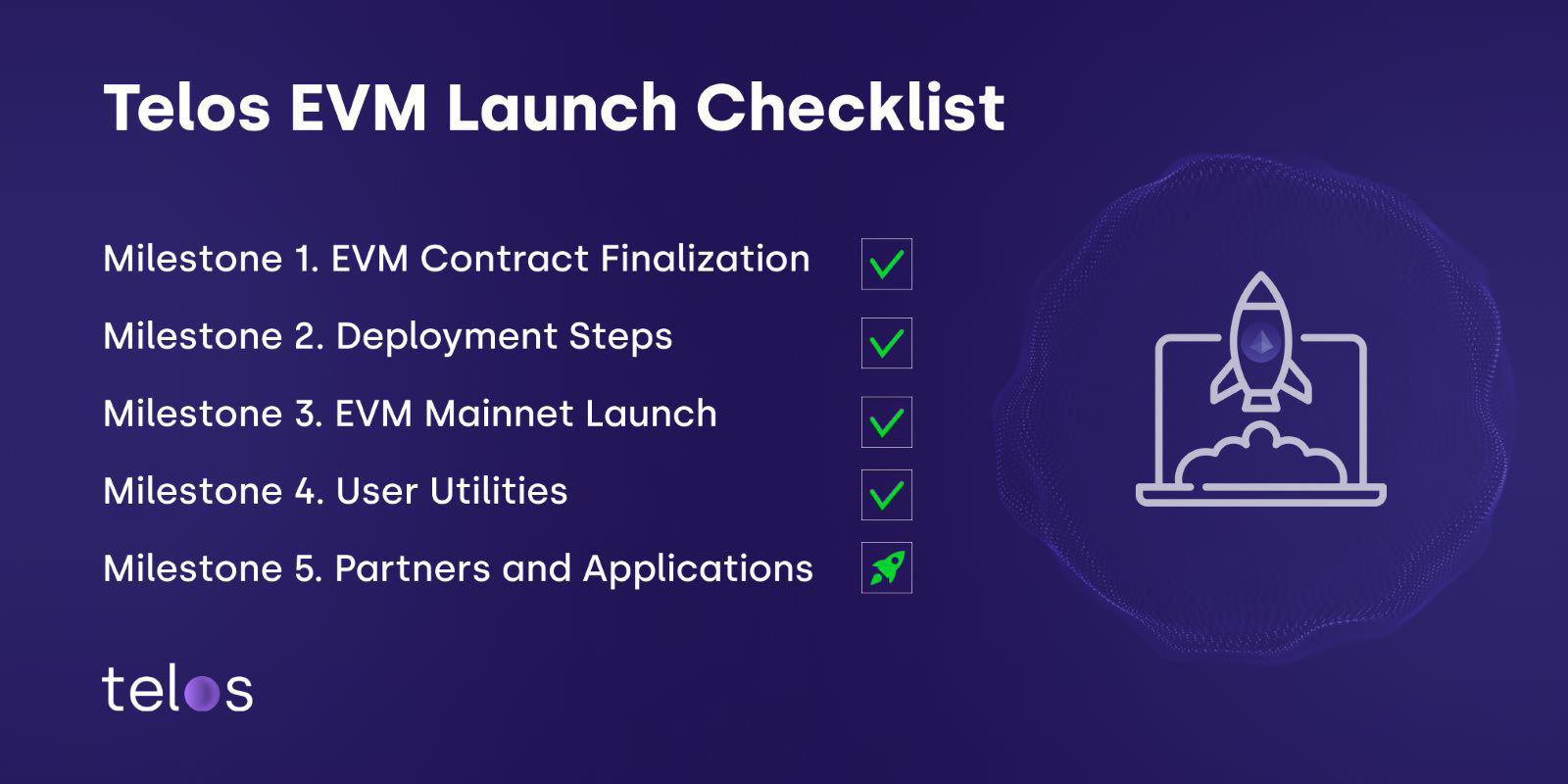 The Telos EVM launch is more of a process than a one-off event. Each step we take brings us closer to mass adoption of the Telos EVM, but that’s good news for our Telos community. It means we’re gearing up for another exciting month and beyond as we move through milestones like finalized contracts, deployment, and onboarding, among others.

The roadmap's graphic was last updated the 1st November 2021

October is upon us – do you feel something different in the air? You may just be feeling the energy and focus surrounding the Telos EVM – Ethereum Virtual Machine. We’re using the changing season to usher in a newly updated roadmap for the Telos EVM – and let you know that the Mainnet launch phase is underway!

Our ecosystem has seen a burst of growth and excitement in recent weeks after our EVM-themed week. We know many of our new community members are likely curious when the Telos EVM will be launched. So let’s build the hype and show you where the Telos Core Devs are at!

Let’s take a look at the EVM roadmap! We’ll walk you through why these steps are necessary as we go along. We’ll also let you know how much progress has been made on these tasks. First, up…

Thanks to all our community members, new and longtime, for supporting our ecosystem time after time. We hope you’re ready for the Telos EVM launch! Make sure to keep an eye on our social media for all kinds of tidbits about the EVM, exciting updates, and so much more.

If your project could benefit from Telos Decide, Decide Voter, or any of the other tools that Telos has to offer, we want to hear from you! We’re constantly looking for new developers, partners, investors and everyone else in between to get involved with the Telos ecosystem. If this sounds like you, drop us a line here!
‍

Telos EVM is an Ethereum virtual machine that runs Solidity contracts on Telos just like Ethereum. But the Telos EVM is much faster and has higher capacity. Even better, it costs around 1/100 of the cost of Ethereum gas fees and has no front running.

Developers deploy their Solidity smart contracts to Telos EVM without needing to modify the code. This is a huge deal for Ethereum-based dApps that cannot support the enormous gas fees that DeFi projects generate on Ethereum. The Telos EVM will be a godsend allowing them to continue to operate at a tiny fraction of the expense.

Unlike other scalable EVMs, which are a fork of the original Go Ethereum (GETH) code, the Telos EVM is an entirely new EVM. The Telos Core Devs have worked tirelessly to redesign this code from the ground up on much faster technology.

Because of this, the Telos EVM will outmaneuver the same scaling issues other EVMs face. The Telos EVM will also reveal internal transactions and should deliver all the same information users would expect of any EVM.

Being so unique, the launch is also a different process. That’s why we brought in some industry experts, Sentnl, who have facilitated an in-depth audit. Their audit for the Telos EVM led to the discovery of a security vulnerability in the original Go Ethereum (Geth) code. This highlights the skills and strength of the Sentnl audit as well as the high degree of professionalism and quality control involved in the making on the Telos EVM.